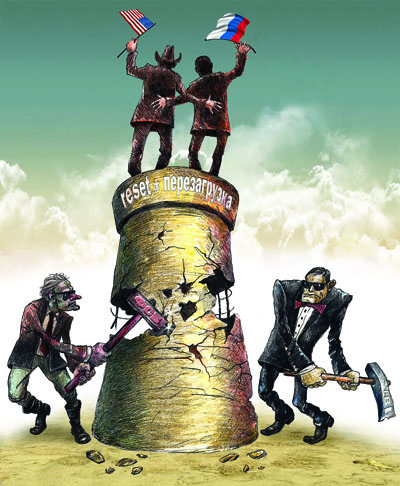 To paraphrase a classic expression, there is always room in life for a spy scandal. The arrests in the United States of 10 “Russian agents” and the unsuccessful pursuit of an eleventh halfway around the world have given the chattering classes on both sides of the Atlantic enough material for the remaining summer months. This time, however, they have only managed to pull off a rather shaky thriller, nothing like the exposure of the great and dangerous Aldrich Ames or the arrests of the Russian “moles” Robert Hanssen or Harold Nicholson. These men could have been characters in the classics of the genre, such as the novels of John Le Carré or the James Bond films. They were clever, cunning, resourceful, professional spies. But what the FBI gave the New York court as evidence against the characters in the current case sounds comical—more like it belongs to a Hollywood parody, a Naked Gun movie, for example. And that’s what the “cinema” of high-level politics is like these days.

Every now and then the FBI publicizes details that are shocking in their childish ingenuousness. For example, one character in the case, Christopher Metsos, arrives in New York with two bags of money. He hands over one to his accomplice Richard Murphy in a restaurant in Sunnyside, Queens. (How the FBI could tell that it has dollars in it, and precisely $40,000 dollars, it is not explained.) He gives instructions: Part of the money is for you, and the rest you must give to another person. A comedy of the absurd then begins. To ensure he’s not mistaken for someone else, Metsos suggests some password options to Murphy: “Uncle Paul loves you” and “It’s good to be a Santa in May.” Then he travels upstate with the other bag and conceals the stash in a hiding place. Two days later, Michael Zottoli and Patricia Mills arrive from the other end of the country, from Seattle, to pick up the package. Then there’s the trip to London made by another suspect. She flew to the UK on her own passport, but continued on to a subsequent destination on a false British one.

A number of episodes are reminiscent of the comical plotlines of the Cold War period. Before last year’s visit by US President Barack Obama to Russia, the Murphy couple were allegedly sent a request “from the center” to obtain information on the U.S. stance on the Strategic Arms Reduction Treaty, Afghanistan and the Iranian nuclear program. Couldn’t Moscow have just Googled that information? And then there’s the red-haired, green-eyed beauty Anna Chapman, who unquestioningly turns up for a meeting with an FBI agent who is passing himself off as a liaison officer from “Moscow center.” He instructs her to give forged passports to various people. She agrees. She goes to a kiosk where they sell mobile phones, presumably so she can call her “client.” At the same time it doesn’t bother her at all that she is being followed by FBI agents. She buys a phone, and throws the box and receipt in a trash can. On the receipt there is a completely stupid address—99 Fake Street—and a similarly made-up Russian name for this modern day Mata Hari: Irina Kutseva.

The FBI press release resembles a hastily constructed tangle of threads that are being pulled by everyone and therefore becoming more and more tangled. Of course, the Russian side bears its own responsibility for the situation, demanding explanations one minute and losing interest the next. First, Alexander Torshin, deputy chairman of the Federation Council, caustically remarks that since it’s only American citizens who’ve been put under the microscope, the Americans should get on with investigating it. Then the Russian Ministry of Foreign Affairs admits there are Russian subjects among those arrested and vouching for the whole group, saying they weren’t harming American interests. “So I’m wondering,” said Nikolai Zlobin, Itogi analyst from the Washington Global Security Institute, “how the Ministry of Foreign Affairs knows what Russian citizens who’ve been living in a foreign country for many years have been doing there.”

Not everyone in Washington has had a skeptical attitude towards this story. Leon Aron from the American Enterprise Institute allows for the possibility that what has been uncovered is “a soft, broad-netted search not for hard facts intelligence, but to divine the internal workings of the American political system.” According to Aron, another aim could have been to work out another American riddle—how the United States has for decades managed to outstrip the rest of the world in developing new technologies. It seems that the Russian special services were using a naïve approach to try to understand the enigmatic American soul.

Incidentally, there is another theory that Nikolai Zlobin proposed to Itogi: The bust was a rudimentary set-up by Moscow aimed at discrediting the American security services, in which there is no shortage of “hawks” who are hostile to the idea of “resetting” relations between the two countries. Most likely, Zlobin thinks, “the flagrant amateurism and total unprofessionalism of this ‘network’ were deliberately invented by the Russian side as a trap for the FBI.”

If that is the case, the operation has clearly succeeded. The FBI looks idiotic. But for the sake of justice we should note that it seems the U.S. special services also understand the ambiguity of the situation in which they find themselves. On one hand, they could not fail to trumpet their success to the whole world. On the other, it is clear that this success is very dubious. And that is why the official indictment makes no mention of spying or of the accused handing over any secrets to Russia. They are accused only of not declaring themselves as agents legally gathering information about the United States in the interests of a foreign country. That is normal practice in America—it’s fine to be a “spy” if you’re gathering information from open sources, are not breaking the law and, most importantly, are officially registered as a foreign lobbyist. So the only serious reason to be concerned for the fate of this “Magnificent 10” is the charge of money laundering made against some of its members.

This tale reminds me of the stories of the alleged billions laundered by the “Russian mafia” through the Bank of New York. Ten years ago, there were revelations, more revelations, colorful details, and then a mid-level bank found herself on trial and was given a conditional sentence for violating regulations. Déjà vu?

Despite the fact that this whole spy story threatens to become a comedy, high-level political negotiations could fall victim to it.

“Everything that Barack Obama has invested in his relationship with Dmitry Medvedev has undoubtedly been put at risk,” said Nikolai Zlobin. “If the U.S. president’s political opponents play this story right, the administration’s biggest foreign policy achievement— the Strategic Arms Reduction Treaty—might be doomed: The Senate will either postpone ratifying it or vote against it. And of course this could have a knock-on effect on other aspects of bilateral relations.”

There is one positive thing: Both the United States and Russia are showing their determination not to make a mountain out of a molehill.

“I don’t think this will affect the rebooting of relations with Russia,” said White House official spokesman Robert Gibbs. And Barack Obama’s own reply to one persistent journalist’s question about what he thought of the spy scandal was very eloquent.

“Thank you,” replied the U.S. president.

In truth, the words “thank you” are hardly what he might tell those who concocted this whole spy tale.