Surkov: Russia needs 'as many foreigners working as possible' 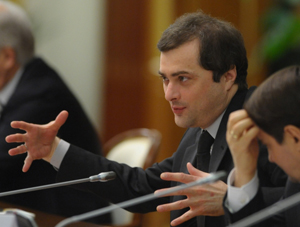 “We have to make it normal for people to come and work in Russia,” Surkov said Thursday at a parliamentary hearing before the first reading of the law to foster the development of a technology hub in the suburb of Skolkovo.

Russia, which shed scientists and engineers en masse after the Soviet Union collapsed, “should have as many foreigners working as possible,” Surkov said. “Import of brains” will be the main instrument of bringing the best talent to Skolkovo, he said.

President Dmitry Medvedev last week visited California’s Silicon Valley and urged U.S. companies to “actively partake” in an effort to establish the center. The president in March asked oil and metals billionaire Viktor Vekselberg to oversee the creation of a Silicon Valley in Skolkovo, where tax breaks and other incentives will be offered to lure investment to spur innovation and production of high-technology products.

Vekselberg, executive director of TNK-BP, said he would quit the BP venture in Russia by the end of the year to focus on Skolkovo. He said he chose to chair the project because of the “serious challenge” it presented in bringing together business, the state and educational institutions.

In California, Vekselberg accompanied Medvedev who toured Cisco Systems in San Jose and Apple in Cupertino. Medvedev also visited Twitter, a microblogging service with about 190 million visitors per month, and opened his own account.

Cisco, the biggest maker of computer-networking equipment, plans to invest $1 billion in Russia over the next decade on innovation and business development, including building offices in Skolkovo and increasing research, chief executive John Chambers said June 23 during Medvedev’s visit.

Vekselberg said Thursday that it would take as much as 60 billion rubles ($1.9 billion) of state and private investment over the next three years to get Skolkovo infrastructure up and running. Construction will begin at the end of next year, he added.

Deputy Economic Development Minister Stanislav Voskresensky said Thursday that companies selected for Skolkovo will get tax breaks even before the hub is completed. The breaks, including zero income and property taxes, have been agreed on with the Finance Ministry, he said.