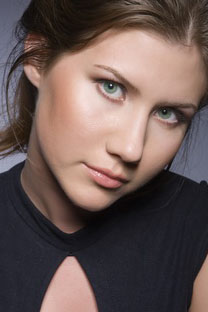 “You didn’t by any chance know Anna Chapman?” a fellow journalist wrote me from London the other day, in urgent need of any information at all about the private life of the recently accused Russian spy. Alas, I never had the honor of being acquainted with Anna Chapman, suddenly a household name. Naturally, Anna did not plan it that way. To land in prison, even an American one, is not the best route to fame and fortune. But something tells me that Anna’s true story will not end on this unfortunate note…

It’s summer. It’s hot. All anyone can think about is vacation. This is the time when journalists secretly begin to hate their jobs. In summer, as a rule, nothing interesting happens, but newspapers still come out every day and the pages have to be filled with something. All the talk of “resets” and “overloads” has become extremely tedious; the news out of Iraq is hardly encouraging, the news out of Afghanistan is worse. Then suddenly, this! A web of Russian spies exposed in America! A real information bomb. The fascinating details just keep coming. The alleged spies used invisible ink and passed secrets on the run, exchanging identical bags. To make contact they had a special password: “Excuse me, but didn’t we meet in Bangkok last April?” Their private codes were posted on public Internet sites. And what do you think of “Miss Hydrangea”? This was the secret nickname of one of the suspected spies who, in between working miracles with her suburban hydrangeas, made plans to pump U.S. Secretary of State Hillary Clinton for information. No, I don’t care what you say. The guys in the FBI’s press department are pretty good. In terms of their ability to develop an intrigue and keep readers in suspense, they’re right up there with Hollywood screenwriters. The Russian Foreign Ministry took umbrage because the round-up of suspected spies began just after Dmitry Medvedev wrapped up a visit to the United States. How could they! But we ought to be grateful the round-up didn’t start just before the visit! If it had, the Russian president would have been stuck fielding ticklish questions like: “Excuse me, but didn’t we me in Bangkok last April?” Or worse: “What do think of Anna Chapman?” No doubt about it, the young Anna Kushchenko (her maiden name) is the heroine of this extremely mysterious story. “The girl whose gaze made men’s knees knock,” as one rather romantic German paper put it. Of course, it’s an extraordinary coincidence that Anna’ Facebook page has so many good pictures of her (the other suspected spies showed nowhere near as much forethought). But for some reason the picture I keep seeing in my mind’s eye is one of FBI guys sorting through photos of Russian beauties: who shall we pick to play in the Bond girl — the blonde or the brunette? No, no, let’s use this redhead. Meanwhile James Bond was evidently Christopher Metsos, now on the run from the Cypriot police. Admittedly on the old side to play a super-hero, but the best they could do. For now, though, the action hinges entirely on Anna Chapman. Without her, the story would have died long ago.

Scenes from the very ordinary life of this very ordinary girl have suddenly become of interest to everyone. Former classmates are happy to recall that Anna was the most striking girl in their group: “It was instantly clear that she would go far.” Business colleagues who met her in Moscow talk about how energetic and purposeful she was — “She could run circles round any man”. But Anna’s ex-husband, an Englishman, went further than anyone, given the chance to cash in on his erstwhile Russian wife. He was especially hard on Anna’s father; father- and son-in-law clearly did not get along. Next came Anna’s private letters, followed by various intimate details — all information, evidently, of the greatest worth. Excuse us, Anna, nothing personal, just business.

Now even Turkish intelligence has taken an interest in Anna Chapman. The source of this interest was once again her Facebook page which, the Turks were happy to report, included pictures of a recent jaunt to Istanbul. Knowing the passionate love Turkish men feel for Russian girls, one imagines Turkish intelligence solicitously filing a request with the U.S. Department of Justice to quickly hand over the “Russian spy” for a partial cross-questioning.

But in the morass of all this minutiae, we seem to be missing the point. What did Anna do that was so terrible? What did she do wrong? What incredible damage did she do to America during her brief sojourn there? If “Miss Hydrangea” supposedly had big ideas about Hillary Clinton then I suppose Anna will be accused of trying to hook up with Barack Obama.

But why waste time on trifles. Especially since we already know from Anna’s ex-husband of her plans to become acquainted with England’s princes William and Harry. What a nightmare! She wanted to worm state secrets out of them! But why shouldn’t a pretty girl dream of such a pleasant acquaintance? After all, already one English king has abdicated for the sake of a commoner.

I have the feeling that this whole spy flap will end in nothing. Anna will probably be deported from the United States. Which may not upset her that much. Her friends say she wanted to leave anyway. And soon we’ll learn the next installment in the life of Anna Chapman. When the Soviet authorities sent the Russian poet Joseph Brodsky into exile “for parasitism”, Anna Akhmatova made the famous remark: “What a biography they’re making for that red-haired one.” All the red-haired Anna will have to do is convert her fame into money. As a smart and ambitious girl, she’ll manage this. We’ll certainly be hearing more from her. Good luck, Anna!

Anna Chapman became the face of the spy scandal. Huge press interest in her is unlikely to go away.
But she’s barred from making any money from it, as part of her plea-bargain.