The man who refused a million dollars 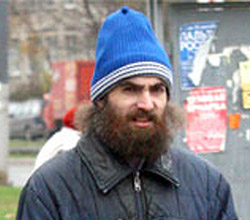 What everyone has been talking about for so long and couldn’t quite believe has now finally happened. The Russian mathematician Grigory Perelman has officially refused the Millennium Prize of $1 million awarded him by the Clay Mathematics Institute in Cambridge, Mass., for proving the Poincaré conjecture. Perelman’s explanation for this refusal was as surprising as his actual refusal. He disagrees with the decision of the mathematics community: “I do not like their decision, I consider it unfair,” he said. “I consider that the American mathematician [Richard] Hamilton’s contribution to the solution of the problem is no less than mine.” What Hamilton thinks about this is not yet known.

Since March when the prize winner was announced people had been guessing whether Perelman would take the money or not (he had earlier refused a prize of $10,000), and if he did take it, then what he would spend it on. Any number of people wanted to help him in this less-than-simple matter. The most forthright turned out to be the communists of St. Petersburg, Perelman’s native city. They wrote him a letter containing a detailed plan of action. First, said the communists, you need to quick take the money, preferably with interest. Second, invest it in the construction of a scientific center to educate children from low-income families. Third (our personal request), contribute $100,000 to the Lenin’s Tomb Fund.

The Russian government also had something to say about “Perelman’s problem”. Vladimir Putin, in a speech to Russia’s academicians who are always asking him for money for science, suggested that they follow Grigory Perelman’s example. “We try to help him at least in some way, but he won’t take even our money,” the prime minister said with pride.

This hitherto unknown mathematician has suddenly become incredibly popular. The public has asked that he be made an honorary resident of Petersburg. Viktor Vekselberg, head of the high-tech Skolkovo Project, has asked Perelman to be on the innovation city’s advisory board. Some people are even trying to befriend the reclusive mathematician. For instance, fellow Petersburger Sergei Mironov, Speaker of the Federation Council. Like the communists, he wrote Perelman a letter full of compliments and flattery and asked to meet with him to discuss problems of science. Who knows, Perelman and Mironov may indeed have something to talk about. Mironov, too, has refused money. Judging by his income declarations, he is the “poorest” of all of Russia’s governors. He literally lives from paycheck to paycheck. Even so, Perelman did not write him back.

Perelman’s widespread popularity is easy to explain. His having proved the Poincaré conjecture clearly has nothing to do with it. Most Russians have no idea what that is. What they like is Perelman’s stubborn refusal to take the money. The money is being pressed on him, but he still won’t take it. Even now, in this most materialistic of post-Soviet times when everyone seems to be screaming in your ear: earn money, get rich, spend it, get all you can out of life! “I don’t need anything, I have everything I need,” Perelman explained to journalists through the closed door of his apartment. Yet the neighbors say Perelman lives not just modestly, but poorly.

One could, of course, chalk all this up to the eccentricity of a mathematical genius. But a former colleague at the institute where Perelman worked until 2005 put it this way: “He is exceedingly punctilious. Sometimes he would see violations of moral codes where, in fact, there were none.” The mathematical community considers that Perelman solved the problem, but he says that Hamilton deserves the prize. We, his contemporaries, feel sure that a million dollars is the equivalent of happiness in life and that one shouldn’t refuse such presents. But Perelman has a different opinion. Do you catch his meaning? He simply has other criteria concerning what is moral and what isn’t, what is correct and what isn’t. It seems that he doesn’t just see “violations of moral codes where there are none”, but sees more than all of us put together. Perhaps that is what helped him solve the “unsolvable” problem.

Modern-day Russia has a complicated relationship with money. Life is bad when you don’t have any. On the other hand, when you do have money and especially when you have a lot of it, life, for some reason, is still not good. Take Russia’s beloved and wildly popular sports: soccer and hockey. The government invested huge amounts of money in both. As a result the coaches got a million euros, our soccer players became millionaires, to say nothing of our hockey players. And what happened? Our soccer team didn’t make it to the World Championship, while our hockey team lost the World Championship and the Olympics. It turns out that in addition to top salaries, our players need to have something else as well — in their hearts or in their heads. I don’t know what it’s called, but you obviously can’t buy it.

So what does Grigory Perelman have to do with this? Everything. He seems to have that mysterious “something” and it’s worth a lot more than a million dollars. He knows why he’s here and what he needs. What are all the temptations of the world to him compared with that knowledge?

The mathematician William Thurston had this to say about Perelman’s refusal of this valuable prize: “I am filled with a deep sympathy and admiration for his inner strength and purity, for his ability to be true to himself. We learned from Perelman the mathematician. Perhaps we would also do well to think about ourselves and learn from his attitude towards life.”