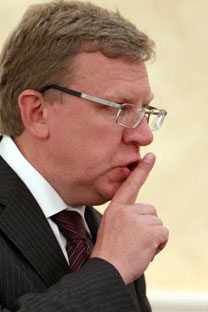 Finance minister Alexei Kudrin has been fighting a battle - a somewhat lonely one at times - for economic liberalism and fiscal prudence for decade or so now. And despite the fact that it was only the $600bn in reserves that he had ringfenced that saved the Russian economy from sliding totally into the abyss last year, he still has to fight the same battles over and over again.

Last week it was his proposal to raise the retirement age to deal with Russia's gaping pension's financing gap that had opponents hurling insults. Yesterday, he had deputies in the State Duma suggesting he should have his head torn off after he urged the lower house to keep a lid on state spending to help squeeze the budget deficit to under 3% by 2013.

Instead, Kudrin insisted, Russia's great modernization mission must be powered by private investment to have long-term effects. "If we support demand with big [stimulus] packages it can support growth in the near term ... but in 2-3 years it will, to the contrary, reduce economic growth," Kudrin declared, according to Reuters. "It can create inflation, appreciation of the exchange rate, state borrowing and thus a reduction of corporate borrowing. So our task is to reduce the deficit in the next few years."

There were already signs last month that Kudrin's cautious approach faces opposition from the highest levels when Prime Minister Vladimir Putin announced that the budget would be based on a forecast oil price of $75, with a suggestion that pensions and salaries could expand in the near future.

Although economic recovery is steady, growth remains tentative, but with oil prices apparently steady above $70, the temptation is there to raise spending as elections (for the Duma in 2011, for the presidency in 2012) draw nearer.

The move to a base scenario of $75 for a barrel of oil flies in the face of the extremely conservative forecasts seen in recent years. Clearly losing the argument, Kudrin made one last bid to dampen expectation last month, retreating to draw a line in the sand at $70, but even that failed.

Neveretheless, Kudrin continues to bang the drum. He warned once more on Wednesday that government reserves will be eaten by the deficit by the end of this year, and that the country will need to sighificantly deepen its level of debt to cover shortfalls over the next few years.

With a forecast deficit of 5.4% of GDP this year, the government plans to draw RUB 1.4tn ($45bn) from the Reserve Fund and borrow RUB 1.1tn to cover it. With the fund standing at around $40bn at the end of June, that will mean Russia will need to borrow to finance deficits in the following three years, with a target of reducing the deficit to 2.9% of GDP by 2013.

Kudrin warned that this will more than double the state's debt servicing costs to $19bn by 2012. "From next year the main source for covering the deficit will be borrowing," the finance minister told the lower house. "Expenditures for debt servicing will rise from RUB 280bn this year to RUB 587bn in 2012, even if we cut the deficit to 2 percent in 2013."

In typical fashion, Communist leader Gennady Zyuganov led objections with a less-than-sophisticated response. Without going into detail, he accused Kudrin of sabotaging President Dmitry Medvedev's modernization agenda. Claiming that state spending should lead the way, Zyuganov said that "in the place of the president, I would have torn off your ears, together with the head."