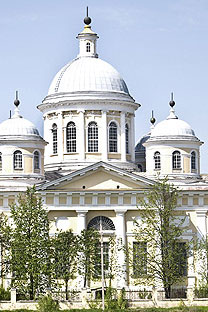 The fair city of Torzhok is among the oldest settlements in central Russia. Situated on the Tvertsa River some 60 kilometers to the west of Tver, the town is first mentioned in ancient chronicles under the year 1139. Its favorable location made it a place of active commerce (the name “Torzhok” comes from the word for trading site), and the town was closely connected to the city-state of Novgorod, a leading center of medieval Russian trade The rise of Muscovite power in the 15th century ultimately brought an end to Novgorod's independence in the 1480s, and in 1478 Torzhok entered the domains of Moscow's ruler Ivan III (the Great). After the founding of St. Petersburg in 1703, Torzhok experienced a revival of its fortunes, as the town became a major transfer point for supplies moving to the new imperial capital.

The post road between Moscow and Petersburg also brought a steady stream of eminent visitors through Torzhok. In the 1770s, Catherine the Great commissioned the architect Matvei Kazakov to build a small "transit palace" there. In the early 19th century, Russia’s greatest poet, Alexander Pushkin, visited Torzhok on a number of occasions, as did Nikolai Gogol, Ivan Turgenev and Leo Tolstoy.

Like other provincial towns, Torzhok was essentially rebuilt in the late 18th century, when Catherine the Great undertook to transform Russian provincial life by bringing order into its city plans. Torzhok benefited from these ideas of classical harmony in the design of a new central square and arcaded market buildings. In addition many of the town's prosperous residents rebuilt their houses in neoclassical designs. A number of these houses still exist, and they contribute much to the charming ambience of Torzhok.

The most noticeable evidence of the town's transformation in the early 19th century is the number of new churches. Between 1815-1822, Torzhok's major cathedral, the Transfiguration of the Savior, was rebuilt to a plan by the great Petersburg architect Carlo Rossi. The dominant feature in the landscape of historic Torzhok is the Monastery of Saints Boris and Gleb, reputed to have been founded in 1083 and dedicated to the earliest martyrs of the Russian Orthodox Church. Originally built of logs, the monastery gained a few brick buildings by the late 17th century. In 1785, work began on rebuilding the monastery Cathedral of Saints Boris and Gleb, designed by Nikolai Lvov and one of the greatest monuments of Russian neoclassicism, The monastery's wealth found further expression with the construction of the Church of the Miraculous Icon of the Savior, over the main entrance gate. This gate church culminates in a high bell tower, Torzhok's most visible landmark.

In light of the destructive events that have swept through Torzhok in the 20th century, including its position of the front line in the fall of 1941, it is remarkable that the town has a excellent example of wooden church architecture. The log Church of the Ascension has been frequently repaired since its construction in the mid 17th century, nevertheless, it is a miracle that its soaring tower of octagons has survived, especially situated as it is on a site so close to the steep bank of the Tvertsa River. Those who love Russian wooden architecture will find other examples preserved at a park on the grounds of the former country estate of Vasilyovo, just outside of Torzhok. The park is situated within a landscape of exquisite beauty, and faces another estate, Mitino, just across the Tvertsa River. In addition to wooden churches, houses, and other buildings assembled on the site, the park has some remains from the Vasilyovo estate, such as an ingenious stone bridge designed by Nikolai Lvov in the late 18th century.

Whatever the challenges of its recent history, Torzhok still has the opportunity to preserve the historic legacy that endows it with such distinctive beauty.