A handshake in space 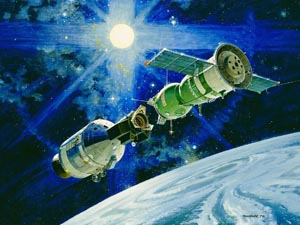 The beginning of the end of the Cold War rivalry in outer space between the two great superpowers is easy to spot: It was the famous handshake between Soviet space commander Alexei Leonov and NASA astronaut Tom Stafford when their two vehicles docked together in orbit. The Apollo-Soyuz program, or Soyuz-Apollo as it is known in Russia, took place 35 years ago this week, when on July 17, 1975, the NASA Apollo spacecraft and the Russian Soyuz gently docked together.

Conceived in the Nixon and Brezhnev era of détente, the program was a symbolical effort to signify that at least in space, the Cold War adversaries could work together and rely on one another. Not that both sides completely trusted one another yet. Former NASA official Arnold Aldrich told me that they would meet their Russian counterparts in hotels in downtown Moscow, not at the space facilities in the closed space city of Kaliningrad. And Russian colleagues recounted how carefully they were watched as they went about their stay in America. Still, it was a huge leap in faith that went far beyond the technology involved. For the Soviet space officials, coming to America was a cultural eye-opener. Astronaut Vance Brand remembers Leonov asking, in a puzzled voice, why the cars on the Houston highways had so many colors, not just black and gray. And the choice of products in the local stores was equally puzzling to the cosmonauts who believed the Houston malls were reserved only for the space elite, since there were no long lines.

On the American side, the astronauts were introduced to the Russian fascination with and pride in space exploration. Deke Slayton told me once that when he visited Moscow it was the only place in the world where schoolchildren recognized him, from pictures in their textbooks. “No one knows me in Houston,” Slayton said to me ruefully. “I have to come to Moscow to be remembered.”

The strange thing about this anniversary is that in the end, Apollo-Soyuz actually mattered. Not at first. Despite lofty promises, there was no repeat of Soviet-American cooperation. That had to wait until the collapse of the Soviet Union and the emergence of the Russian Federation. When, in the early 1990’s the Shuttle-Mir program was launched, the first officials on both sides were veterans of the Apollo-Soyuz days. Vince Brand was working for a major aerospace contractor; Arnold Aldrich was still at NASA. On the Russian side were some of the same officials who had negotiated the earlier agreements. There was a personal history that overcame the major technical and political hurdles.

That’s the funny thing about politics and politicians. Most of the time, the photo-ops and press releases and hyped-up projects fade away, leaving behind little that changes our lives. But sometimes what they do actually makes an impact beyond even their wildest dreams. That turned out to be the case with the Apollo-Soyuz program. It made easier the greatest partnership we enjoy today between the Russians and ourselves. The International Space Station, and our cooperation in space, has matured into a robust friendship that can only be a stepping stone to even greater cooperation in the decades to come.

And it all started with a handshake in space.

Jeffrey Manber is the author of Selling Peace, which tells the unique story of his representing the Russian space program during the 1990’s.