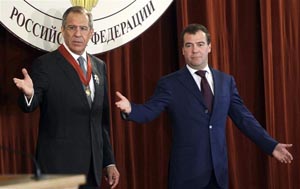 In a recent meeting with Russia’s ambassadors and envoys to international organizations, Russian President Dmitry Medvedev called on Russian diplomats to shed old stereotypes and concentrate on three major goals: promoting economic and industrial modernization to build an innovative economy; strengthening Russia’s democracy and civil society; and boosting international cooperation in the fight against organized crime.

“We should use our foreign policy opportunities more effectively to solve our internal problems and modernize our country, its economy, the social sphere and also the political system,” said the president, according to the transcript posted on his website.

Medvedev urged Russian diplomats to focus on boosting Russia’s multilateral contacts and stimulating new investment. Along with the officials of the Ministry of Economic Development and other economic institutions, diplomats must be aware of all key areas of modernization, from medicine to telecommunications.

“We need special modernization alliances with our main international partners, especially with such countries as Germany, France, Italy, the European Union in general, and the United States,” Medvedev said. Although he called cooperation with CIS partners a priority, the president placed it after cooperation with the Asia-Pacific region and Russia’s colleagues in the BRIC group.

The president’s call resounded with Russian diplomats, who have already been taking steps to join the modernization campaign. As Nezavisimaya Gazeta reported, Foreign Minister Sergei Lavrov recently proposed introducing a new position in Russian embassies: attaché for science and technology.

Medvedev suggests modernizing Russia’s democracy and civil society by means of global reform. In his view, the international community should develop contemporary democracy standards, involving all countries in this process.

“The more nations that follow democratic standards in their domestic policies, the better for Russian democracy,” said Medvedev, noting that such standards cannot be imposed unilaterally.

In terms of the fight against organized crime, Medvedev said that terrorism, drug trafficking and illegal migration were global problems by nature, and are typically associated with corruption. “Therefore, this concerns all countries, and, accordingly, our foreign political institutions,” the president concluded.

This review was combined from reports by the Rosbalt news agency, and the Nezavisimaya Gazeta and Kommersant newspapers.

Extracts from the speech of the President of the Russian Federation Dmitry Medvedev at meeting with Russian ambassadors and permanent representatives in international organizations:

On principles of Russian diplomacy

«With all the acute contradictions on the global arena today, we are seeing a clear general eagerness to harmonise relations, establish dialogue, and reduce conflicts.

Reeling from the global financial crisis, we are all jointly searching for new approaches to reform, not only for the global financial and economic institutions, but for the global order overall. This certainly means fairer principles of cooperation, building relations between free nations on a solid foundation, and the firm principles of universal international law. This paradigm shift in international relations opens for us a unique opportunity to put Russia’s foreign policy instruments to the most effective use possible to assist the country’s modernisation. I suppose this is the most important point I would like to raise".

«The principles underlying our diplomacy and our foreign policy remain the same: we must be pragmatic in our work, looking in different directions in line with the multi-dimensional nature of modern life; we must work openly, renouncing confrontation and sometimes we must simply remove the blinders that may still exist in any state and that we probably still have too; at any rate, we must abandon stereotypes».

On principles of Russian diplomacy

On the role of diplomacy in modernizing the economy

«We believe in the success of modernisation, in the intellectual and creative potential of our people. We believe that with the support of our government and in cooperation with foreign partners Russian entrepreneurs, scientists, engineers will turn our economy into one of the driving forces of global development».

«We must be more effective in our use of foreign policy instruments specifically for pursuing domestic objectives, for modernising our country, its economy, its social life and, to some degree, its political system, in order to resolve various challenges facing our society»

»The first challenge is modernising our economy, primarily upgrading our industries and promoting innovative economy as the basic elements of modernisation. Even though I am speaking at the Foreign Ministry, I nevertheless believe that not just staff of Economic Development Ministry and other economic agencies but Russian diplomats as well must know all the major areas of our modernisation efforts like the back of their hands. We are striving to advance in biomedicine, space and information technologies, energy, and telecommunications, and here, we have determined our priorities».

On the role of diplomacy in modernizing the economy

On special alliances for modernization

«What we need, and I have spoken about this before, are special modernisation alliances with our main international partners. And who are they? First of all, it is countries such as Germany, France, Italy, the European Union in general, and the United States».

On special alliances for modernization

On strengthening the institutions of democracy and civil society

«We believe in the viability of our democratic institutions and will insistently develop them to make Russia a thriving society, based on the principles of liberty and justice».

«We must promote the humanisation of social systems around the world and especially at home. At the same time, we must not trade off our national interests, and we must firmly protect them when necessary. But overall, it is in the interests of Russian democracy for as many nations as possible to follow democratic standards in their domestic policy».

The standards of democracy cannot be imposed unilaterally; we know this quite well from our own experience, as we have also been subject to others trying to impose them upon us. Such standards should be developed jointly, taking into account the views of all interested states, including nations where democracy has been established only recently, which includes our state and other states where democracy has not yet gained footing – everyone knows which countries I am referring to. We can follow these jointly-developed standards without hypocrisy or coercion; in other words, this is what we are agreeing upon».

On strengthening the institutions of democracy and civil society

«We believe in the rule of law; we believe that we will be able to eliminate corruption in vitally important social institutions and guarantee that everyone will enjoy living by fair and civilised rules».

« Clearly, this issue is to be dealt with by respective agencies, but nevertheless, the existing international system of organised crime is such that terrorism, drug trafficking, and illegal migration are, by definition, international problems. Unfortunately, corruption usually contributes to these problems or is associated with them. Regrettably, our country is no exception here. Thus, this problem should be addressed by all nations, and therefore by our Foreign Ministry and its representative offices abroad».

«Incidentally, my recent visit to the United States showed that cooperation in the innovations sector can be substantive, rather than something to adorn a summit or just an idle idea. It can contribute to the positive agenda in our relations with the United States and expand the potential of our future cooperation, which should not be limited to cutting down on missiles or sparring over various regional conflicts».

On cooperation in the Asia-Pacific region

«Another important task is to fully take advantage of the potential that exists for the Russian economy in the Asia-Pacific. This vast region has inexhaustible resources, including investment and technological resources, which are so important for converting our economy onto the innovations path and ensuring high living standards in the Russian Far East and East Siberia.

At the same time, Russia’s policy in the Asia-Pacific should continue to be aimed at ensuring the safety of our eastern borders and promoting peace and stability in the region. We intend to use a similar approach in strengthening our strategic partnership with China, including cooperation in the international arena, to further develop cooperation with India, to reinforce our ties with Japan and with other countries, including, of course, the ASEAN states.

In early July in the Far East, I held a big meeting [on the Far East’s socioeconomic development and cooperation with the Asia-Pacific region countries] devoted to this subject. As a result, decisions were adopted to intensify the interaction of the Far Eastern Federal District with individual states and inter-regional associations».

On cooperation in the Asia-Pacific region

«Despite the significance of the West and the Asia-Pacific region as external sources of our modernisation, collaboration with our partners in the CIS remains our overriding priority. We are faced with the challenge of building an extensive and complementary innovation space that should, incidentally, combine harmoniously with the European innovation space. We shouldn’t contrast our work in the CIS with processes that are taking place on the European track, American track and in the Asia-Pacific».

Read the full transcript of the speech