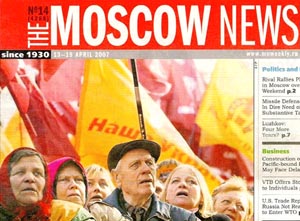 Vitaly Tretyakov, editor-in-chief of the Russian version of the Moskovskiye Novosti weekly from 1988 through 1999 and 2006 through 2007, looks back on the paper’s history and the part he played in it.

Oddly enough, in my career as a journalist I have worked with this newspaper three times, including at the very beginning of the Russian-language edition.

Thirty years ago, I was working at Novosti, at the office for periodicals published in Western Europe. In the run-up to the Olympics, a decision was made to publish a Russian-language version of The Moscow News.

Nikolai Yefimov, the newly appointed editor-in-chief for all MN editions and deputy chairman of Novosti, invited me to work for MN in the department for socialist countries, whereas I had previously written for the capitalist ones. I said to him something along the lines of ‘I’ve been writing for the West, and you’re offering me the socialist countries.

An astute man, Yefimov explained: “Western nations aren’t under our control, and, consequently, we cannot lose them. But those in the socialist camp are, and we’d better make sure they stay that way. Do you see now how much more important the socialist camp really is?” I was too young to see his point then, so I refused the full-time job, but I began to contribute to the Russian-language edition while continuing to work at Novosti.

The launch of the Russian-language Moskovskiye Novosti was, indeed, a momentous event. Those who worked within the Novosti system in the Soviet era know that Novosti journalists were much freer professionally than their counterparts working for periodicals intended for domestic publication. Many sensitive subjects were declared taboo even for extremely privileged publications such as Pravda and Izvestia. But these subjects could be discussed in Novosti’s foreign-language periodicals, and Moskovskiye Novosti became the first Russian-language periodical to share that privilege.

At that time people came to the Moscow News building not only to read issues of their favorite newspaper from stands but also to discuss political and economic news in the Soviet Union and the rest of the world.

One such sensitive issue that was conspicuously absent from the Soviet press was the status of religion in the Soviet Union. Those of us who wrote for the West covered religion extensively, in both propagandistic and real news stories, and I was one of the most prolific contributors. I was passionate about the subject, and contributed a whole series of features about religion in the Soviet Union, some of which were also published in Russian [in Moskovskiye Novosti]. This included reports from theological schools and seminaries, for example: The kind of content the mainstream Soviet press never covered at that time.

That was what made Moskovskiye Novosti so special. In the 1980s, it provided a much broader picture of the country’s domestic life than the most popular, inward-looking Soviet periodicals.

The most glorious period in the history of Moskovskiye Novosti began in late 1986 when Yegor Yakovlev became its editor-in-chief. I remember when he showed up on our radar; I remember how his appointment was discussed. And I remember the first stories he published, which made MN an almost world-class newspaper overnight.

I think the first high-profile story was when [former Soviet foreign minister] Vyacheslav Molotov filed a petition in late 1986 to the Central Committee of the Communist Party asking to be reinstated into the ranks of the Communist Party. It was a brief interview, with just two or three questions and answers. Molotov was a prominent historical figure, and his name could then be found in textbooks. But the press had deliberately avoided mentioning him ever since his resignation, and many people didn’t even know that he was still alive. And suddenly Moskovskiye Novosti publishes a piece about his application, and this short interview. It was literally an international sensation.

By 1988, I had become disillusioned with my work at Novosti. My former boss at Novosti, who was then sitting on the Moskovskiye Novosti editorial board, suggested I become a staff writer for MN, and I accepted his offer. Work there proved to be an entirely new experience for me, both politically and personally. I met all the major pioneers of perestroika. I wrote a lot, and what I wrote was oftentimes more pointed than what others wrote, and so Mr Yakovlev soon offered me to the positions of political commentator and deputy editor-in-chief.

This paper was, indeed, a forum of perestroika and glasnost. And for me it was an honor and a privilege to work with Yakovlev. I got a colossal amount of attention, as did my work. Everyone from the elite to average readers read the paper. And Yegor Yakovlev pushed the limits of glasnost farther and farther every week.

This was a time of transition from glasnost to even greater freedom of speech, and periodicals such as Moskovskiye Novosti, Ogonyok and Argumenty i Fakty were at the forefront of that process. But most other newspapers remained fearful.

Yakovlev was quite well connected politically: He was close with Alexander Yakovlev and Andrei Grachev, both of whom worked in Mikhail Gorbachev’s inner circle. And in general Moskovskiye Novosti supported Gorbachev’s work, although Yeltsin had already emerged as a political counterweight by then.

The intelligentsia, elites and general public who supported perestroika had begun to break up into two opposing political camps by then, supporting either of the two leaders. There was a schism looming inside Moskovskiye Novosti, as well, which was reflected in the newspaper’s content at that time. This was a painful process for Yakovlev, because he was an official Gorbachev supporter who often advised him on certain issues, but, on the other hand, his personal preferences were now veering more and more toward Yeltsin. In was an inner conflict for him.

That was a wonderful time, and Moskovskiye Novosti would never regain that glory. At that moment MN managed to outdo heavyweights such as Pravda and Izvestia. Yegor Yakovlev became the best-known Soviet editor outside his home country. He turned MN into the most famous and frequently quoted Soviet paper – this was a breakthrough in the history of journalism, in human history, in the history of this country, and in world history. Never again would the paper enjoy such fame.

Later on, I left MN to set up the Nezavisimaya Gazeta weekly. After 1991, when Yakovlev was appointed head of the national broadcasting corporation, Moskovskiye Novosti began to lose its fame and popularity, both objectively and subjectively. From the time of his departure until 2006, the paper changed many hands. In 2006, it ended up under the control of Arkady Gaidamak, a man I knew nothing about at the time. MN’s fame, popularity and circulation were close to zero. As the paper’s new editor-in-chief, I noticed during my frequent business trips around the country that the name didn’t ring a bell with younger journalists in the provinces. Many would recognize me personally, but admitted they had never heard of Moskovskoiye Novosti. Those two years were brief. Gaidamak needed MN to strengthen his political status in Russia; for him, this project was all about political image.

MN’s glorious legacy and the excellent performance of its editorial staff should have cast Gaidamak’s name in a positive light inside the country.

I agreed to work there because this periodical was something I held dear, both as a professional and as a human being, and I prized its illustrious history.
I was aware of all the difficulties, but took up the challenge nonetheless. Let me be completely clear that in the two years – actually even faster: within four to six months – we managed to change things dramatically. The paper had lost a lot of staff: when I came along, there were just 12 writers and one photographer. I am proud of the work I did at MN in those two years. I know why the project was eventually closed down, and it had nothing to do with the performance of its editorial board.

I didn’t – and couldn’t – promise any profits, as this would have been unrealistic. Moreover it just wasn’t my job to make the paper profitable.
The paper returned to the fold of living periodicals, papers that were respected and read, including in the Kremlin. Three months after my return to MN, Alexander Solzhenitsyn agreed to give an exclusive interview to me for the paper, and that turned out to be practically his last interview for a newspaper, for the printed press.

This was a new ascent, both in terms of quality and content. It couldn’t have been as spectacular as the one we had witnessed under Yegor Yakovlev, for the political and historical situation had radically changed, and we didn’t have as much time at our disposal. But we still managed to bring the paper back into the nation’s top ten, or maybe even the top five or six in this short period.

Then a new period of infighting began, with sharp divisions between the owners and the editorial board. The project couldn’t be profitable, and I never promised to make it profitable. The owner then changed his mind. The people he had appointed to sit on the board would tell him he should give up on a newspaper that only spends money and makes no profit. But they never mentioned the fact that a project of that kind cannot be commercially viable.

In the end, I quit my position and the paper was shut down. Whether or not this title should be revived is up for debate. A revival is possible. The only thing we need to be aware of is that in the new conditions, this will be a long-term investment, which may regain its former journalistic glory long before it starts bringing any commercial dividends. The living conditions of the print press are far less comfortable nowadays than in the perestroika era.

Should the name be revived? Well, that’s a question of taste. Of course, we can always try to repeat the successes we had in the past, but our subsequent attempts may well fail.