The end of an era in regional politics 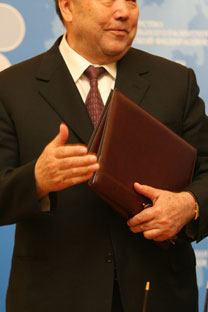 The summer of 2010 should be considered an important period in the history of Russia’s regional politics. After direct election of regional governors ceased in 2005, there were a number of notable changes, but this year we have seen the exit of a number of notable long-term regional leaders. This summer’s changes, unlike the previous resignations and replacements of regional leaders, indicate a movement towards the formation of a new regional elite. The changing political climate in the regions can be seen as part of President Dmitry Medvedev’s modernization drive—it is now expanding beyond economics and technology into political procedures.

As a result of this modernization, a series of significant changes have taken place. Vladimir Chub left his position as governor of the Rostov Region, a post he had held for 19 years. Soon, Nikolai Fedorov will end his term as president of Chuvashia; he led the republic from January 1994 to the summer of 2010. Sergei Katanandov gave up his post as leader of the Republic of Karelia after 12 years. And in March, even Mintimir Shaimiyev, a patriarch of Russia’s regional politics, left his post in Tatarstan. His name was synonymous with the “contractual model” for relations between Moscow and the regions, a model that was strongly criticized by the federal government beginning in 2000.

But the departure from regional politics that has attracted the most attention is the departure of Murtaza Rakhimov, the president of Bashkortostan. And in this case, the length of service—17 years—is not the central issue. Nor is the significance tied to the importance of Bashkortostan, although this factor cannot be ignored as the republic is one of the most economically developed regions of the Russian Federation and is home to centers of oil extraction and refining. Rakhimov is a significant figure because he is an example of an extremely effective politician who was able to propel himself to the top of his profession, to overcome a number of crises, to crush his competitors and become an important political figure on a much higher level than his official position, despite having entered politics late in life, at the age of 56.

Rakhimov is mainly connected with the establishment of statehood for Bashkortostan and the preservation of some amount of independence for it. He is also credited with forming a system of government, which has in many ways become a model for relations between the Moscow and the regions. Rakhimov realized in the early 1990s the importance of establishing sovereignty for Bashkortostan within the Russian Federation and over the next 20 years, Rakhimov’s policies stuck to two themes. The first was the need to manage the complicated ethnic composition of the republic. When the Republic of Bashkortostan was established, Bashkirs made up less than half of the population and were not the largest group in terms of numbers; they were actually in third place behind Russians and Tatars. Given this situation, Rakhimov was able to carve a niche for himself in Moscow as the guarantor of peace in the multiethnic republic. This policy continued to work to Rakhimov’s advantage even during 2003, when the Kremlin was seriously considering supporting Sergei Veremeyenko, an ethnic Russian, for the presidency over Rakhimov.

The second dominant theme is the economic potential of Bashkortostan. In the struggle to preserve particular preferences for the republic’s elite, Rakhimov embraced a policy of “soft nationalism.” Unlike the leadership in Tartarstan, he did not entertain the possibility of statehood outside Russia. Right from the start his “nationalism” was more grounded and orderly. In August 1994, Moscow and Ufa signed an agreement clarifying jurisdictional subjects and powers. However it was this neat resolution of the ethnic factor and regional independence that made Rakhimov successful for a long time.

Rakhimov also mastered an important principle for a regional politician: He was able to promote projects that were important to the federal government, while maintaining significant autonomy for his own administration. During the Yeltsin years, Rakhimov restrained the local Communist Party officials and maintained the right to pursue his own agenda. When Vladimir Putin was president, Rakhimov turned out votes for United Russia and national officials turned a deaf ear to his comments about Moscow’s hyper-centralization. He once said in an interview that the center can “easily share its social prerogatives with the provinces, but not its income.”

The Bashkir president came into politics at the time when Communism was disintegrating both as an ideology and as a practice of government. He understood that pragmatism was much more important than the particular color of the flag that had to be defended. This explains the ease with which Rakhimov changed his party allegiance from the Communist Party to Our Home is Russia to the Fatherland Party, the Unity Party and finally United Russia. Having begun his career in a time of monumental change, he established a hard and fast principle for himself: The preservation of law and order before everything else. However, for Rakhimov, “law and order” was understood as a regime of personal power that could be shared with the center, but was indivisible within the republic. This model is focused on keeping hold of power rather than toward development or modernization, which explains why now, finally, it was time for Rakhimov to move on.

Rakhimov’s successor, Rustem Khamitov, comes to the presidency from a position as a top manager at RusHydro. He is not part of the old elite, which implies at least the recent presence of new blood in Bashkortostan’s ruling class as well as the arrival of new business into the republic and the appearance of new ideas and of new people. But will the new team be able to manage inter-ethnic interests and are they prepared to balance the needs of the old elite with the need for modernization? And what kind of rules will be brought in to replace Rakhimov’s “law and order?”

The biggest question, of course, is if Moscow is really ready for a modernization in regional politics. Changes in Bashkortostan are important, but the region never had an ethnocracy. And in other parts of Russia, particular in the North Caucasus, there are more scandalous examples of an underhanded arrangement of the political configuration under a single person. For the changes of 2010 to become an example, regional leaders should continued to be replaced with a view towards renewal of the system as a whole, and, secondly, new leaders should demonstrate a significantly higher competency for resolving both socio-economic and inter-ethnic issues. If this happens, then we will be able to talk about a successful modernization of Russia’s regional politics.

Sergei Markedonov is a Visiting Fellow at the Center for Strategic and International Studies in Washington, DC