The Russian Bear suffers through a heat wave 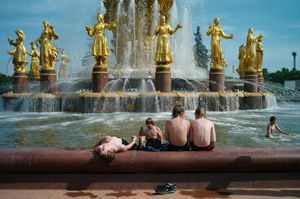 As 23 different regions declare states of emergency, the great drought of 2010 has far surpassed the definition of historic. With temperatures soaring as high as 40° in the shade, the heat wave is making headlines in Russia as it breaks one record after another.

Fires have cropped up around Moscow, which now sits in a haze of smoke from blazes in the surrounding bogs. In Yakutia, over 1,200 hectares of forest have gone up in smoke, and the Rostov region saw 700 hectares ravaged by a wind-whipped fire at the end of June. The country has also had to come to terms with the troubling possibility of tropical cyclones making their way into previously untouched areas such as central Russia.

The resulting wave of panic from the ministries, concerned by the economic fallout of this unusual meteorological phenomenon, is not likely to ease the minds of millions of Russians dripping in sweat from Moscow to Siberia and all points between. The people of Russia are doing what they can do escape the heat and the exodus towards bodies of water has had some tragic consequences: there are new records for water-related deaths to add to this year’s heat records. On July 19 alone, 71 people drowned in Russia while another 274 lost their lives in similar circumstances the week before. Many of these deaths were due to a tragic combination of swimming in unsupervised areas and alcohol consumption, the biggest factor in these types of tragedies.

Drought and the economy: there’s a catch

The ongoing extreme temperatures have resulted in some devastating consequences for the economy, not least of which is the severe damage to the wheat crop. According to a July 23 estimate from Russian Agriculture Minister Elena Skrynnik, 10 million hectares of wheat – an area the size of Portugal – were devastated by the heat, a fact that could also have repercussions on livestock farming. It’s a big blow, particularly since Russia had just overtaken the United States as the world’s biggest wheat producer. Exports from the country are now threatened. “It’s easy to leave the export market but harder to return it to. It would be angering to lose the unique possibilities that were acquired with such difficulty these last five years,” said Pavel Skurikhin, the president of the national Grain Producers’ Union, who said he fears wheat prices could increase by 1.5 to 2 times.

The reduced grain harvest could mean a boost in inflation, a constant plague on the Russian economy that was only recently checked by the global economic crisis. “If the harvest is lower (than 80-85 million tonnes), inflation numbers for August won’t be affected, but the period from September to November will be,” warned Russia’s Deputy Economy Minister, Andrei Klepach.

Did you say global warming?

It was Greenpeace that sounded the alarm on the unseasonal heat. “The heat wave of the past two months is the consequence of climatic change and experts at Greenpeace have proof,” the organization said in a July 21 press release. “The Russian government should take steps to combat the effects of climatic change,” the document urged. The comments were apparently directed at Russian Energy Minister Sergei Shmatko who, only days before in Yekaterinburg, had said he was “opposed to the massive use” of renewable energy in Russia

It was also a jab President Medvedev’s reference to the pshik — the failure of the Copenhagen climate conference that some in the industry have taken as an excuse for laxity. Last year, Medvedev did pledge to reduce greenhouse gas emissions in the country by 10-15% below their 1990 levels by 2020. But numerous experts have pointed out that emissions dropped naturally following the collapse of the USSR and that the numbers could actually increase by 30% over current levels.

In the end, the scorching heat wave of 2010 could have a positive effect by pushing Moscow to get involved in international efforts to fight climate change.

We offer you a special visual report "Heat in the city"