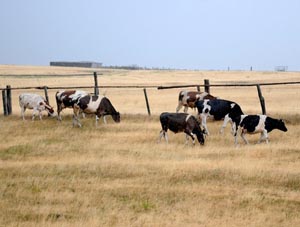 The drought, which initially affected the price of cereals, is now hitting the livestock industry, with several dairy producers, including Unimilk, serving notice on retailers that they will hike prices by 5-10 percent.

Almost all dairy producers are negotiating price rises with retail chains, a representative of a major food retailer said. He said prices would be raised by 5 to 10 percent “within a couple of weeks.” Both major regional and national players are engaged in negotiations. For example, Unimilk plans to raise prices by some 7 to 8 percent, said the spokesman for another major network.

“Suppliers of some goods have asked us to raise [purchasing] prices for their goods and we are now in negotiations with them. We have no plans to change our own markups,” said a representative of X5 Retail Group, but he did not specify what goods would be affected. A spokesman for Magnit said his company has not received any price rise notifications.

Pavel Isayev of Unimilk has confirmed that his company will raise prices. Unimilk is the third largest dairy producer with a market share of 12.1 percent.

“We have not yet made a final decision as to whether we will raise our prices,” said Marina Kagan of Wimm-Bill-Dann.”This option is being considered because the prices of raw materials are growing. But we have seen a 10 percent rise in consumption in the first six months and we do not want demand to fall because of rising prices.”

The prices for products from regional companies may rise even more steeply. For example, Vamin-Tatarstan is set to raise prices for pasteurized milk by 20 to 25 percent as of July 27, according to the top manager of the company’s commercial division. It has already notified the federal networks in a letter.

The problem stems from the shortage of milk, explained Valentina Sorokina, chief of procurement for the Kazan Dairy. The prolonged drought in the Volga area cut milk yields dramatically, which pushed up the purchasing prices for milk, said the Nizhny Novgorod company Shakhunskoye Moloko in a letter.

“Milk consumption in Russia increased by 11 percent in the first six months of the year, the biggest jump in the last 20 years, while production increased by just 1 percent,” said Vladimir Labinov, managing director of the Milk Union. “The imbalance resulted in a very high price for raw milk by summer standards: It now stands at 12 rubles per kilogram of physical milk, and it has risen by 8 percent since June. The heat has made things worse because consumption has grown and production has dropped.” Danilenko claims raw milk prices have not grown in any substantial way: They simply did not drop as much as last summer when the price was as low as 6 rubles per litre, according to Labinov.