Naps are for NATO 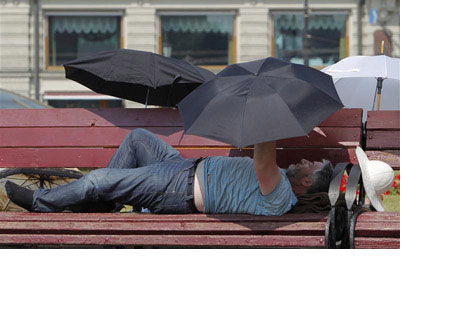 This summer, Russia is wilting under an unprecedented and unrelenting heat wave. My husband comes home three times a day to shower, change his shirt, and return to his un-air-conditioned office, with all the enthusiasm of a slave headed back to the Great Pyramid. Air conditioning specialists now make more money than investment bankers, and, if state-run Russian TV’s Channel One is to be believed, they are working around the clock to repair overloaded units, and, in theory, install new ones.

Yet you can’t get an a/c or fan in this town for love or money: People are taking out second mortgages to pay for freestanding air coolers, now 20 times their original price, which fell off a truck.

Moscow is an inferno, such as Dante conceived, and smelling of damnation. An inferno complete with thick, acrid, black smog from the fires in the subterranean peat bogs, which ring the capital. The Russian Orthodox Church, in its usual practical way, suggested last week that, while the heat was definitely not God’s punishment on Russia (phew), and that it was certainly no excuse for being inappropriately dressed when visiting church, the heat did, nevertheless, provide a good opportunity to contemplate sin and eternal life. I have to think that the Church is on to something.

Russia is a cold weather nation. Russians don’t do snow days. Two, even five, feet of snow do not a state of emergency make. It has to get down to contact-lens freezing -40°F before Russians consider amending their plans even slightly to accommodate the inclement weather.

But this summer, the heat is taking its toll.

The government has come up with a number of helpful solutions on how to combat the heat, such as staying inside if you can, drinking lots of liquids, and avoiding excessive physical exertion. The cows of Russia are taking this seriously, and have started grazing in the late afternoon and early evening, as opposed to the morning and afternoon. This may well have been the inspiration behind a controversial suggestion put forward by Russia’s Chief Physician: the introduction of an official, three-hour, nation-wide siesta.

Dio Mio! A Slavic siesta! I can hardly get my mind around it. I try to imagine Muscovites, in the manner of Italian tailors or Spanish electricians, downing tools at noon, crossing town to go home for lunch and a nap, and then returning around four to resume the working day. There seem to be so many hurdles, both cultural and logistical.

The traffic implications of 15 million people simultaneously criss-crossing Moscow at noon and then at 3 p.m. are apocalyptic in scale. Would Russians go home for the siesta, or would they, like Don Draper, the suave hero of “Mad Man,” stretch out in their office couches for thirty winks? Which begs the question, how many Russians actually have couches in their offices? Is this the time to invest in the wholesale import of blow-up beds to Russia? Are alarm clocks the next air conditioners?

And then, I wonder, would the siesta take the place of, or be added to, the sacrosanct and fiercely enforced Russian “lunch hour?” (My money is on “in addition to.”) What will happen to the average mid-level Russian employee of a large enterprise when he is removed from his – presumably non-alcoholic — workplace canteen, which serves traditional mayonnaise based salads, greasy soup, tough meat drowning in sour cream based sauces, stodgy mashed potatoes, and warm viscous juice, and transported to the bosom of his family for three hours in the middle of the day? Will he – or indeed she – be able to resist the temptation of having a few cocktails with lunch? And what, in turn, would that do to the rate of return to the workplace post-siesta?

Most of all, I wonder what this will mean to working Russian women? In addition to holding down a job, shouldering the lion’s share of housekeeping, childcare, shopping, and cooking, will they now be expected to race home, collect the children from school (because, presumably, the children, their teachers and everyone who works in the school system will also have a siesta) and put a home-cooked, three-course meal of salad, soup, and meat on the table? Or will they rise up and say, “Enough!” and form a powerful anti-siesta movement?

You can see the slogan, can’t you? “Naps are for NATO!”