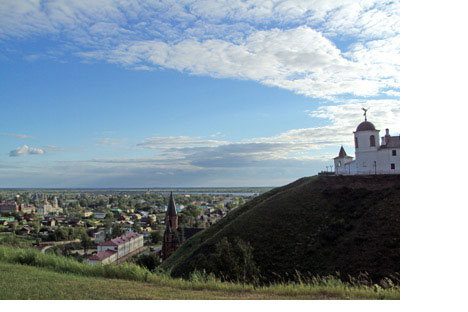 Maxim Gorky called Siberia the “land of ice and chains.” A place with a reputation for extreme cold and prison camps doesn’t seem like the obvious choice for a summer holiday, but the pioneer cities along the trans-Siberian railroad and its tributaries are flowering in the elusive sunshine. Traveling in the area can be challenging, but the adventure has its rewards.

Beautiful Lake Baikal is often called Siberia’s “soul,” but the region’s towns are full of character and history. From the old capital at Tobolsk with its walled kremlin to the newest capital in vibrant Novosibirsk, there is plenty to discover in Siberia’s cities. Writers and artists, tsars and scientists have walked down these neglected streets.

Tobolsk is not on the main trans-Siberian route, but is just a night train away from Yekaterinburg. Siberia’s historic capital was founded in the 16th century by the explorer, Yermak, and his Cossacks. The elegant hilltop fortress in Tobolsk, with its gold and blue-domed churches and turreted trading rows, dates mostly from the early 18th century. The kremlin and surroundings have been beautifully restored, with two fine museums. One, in the 18th century “Deputy’s palace,” traces the town’s history. You can see the treacherous bell that Boris Godunov had flogged and silenced for tolling in a rebellion against him. The prison fort where the exiled Dostoevsky stayed is next door.

The art museum has a more cultural and ethnographic emphasis, including examples of local bone and antler carvings. Down the cobbled ravine and steps under the kremlin walls, you reach the dilapidated old town with its wooden houses and crumbling baroque churches. The stone mansions include the family home of Dmitry Mendeleev, inventor of the periodic table, and the house where the last Russian imperial family stayed shortly before they were murdered in Yekaterinburg. The tiny Tsar Nicholas II study-museum is upstairs.

A little lane past cows and poplar trees leads to the wide Irtysh River. Sightseeing cruises are rare and expensive, but for six rubles you can catch the rusting 1950s ferry. There’s nothing to see on the further shore, but you do get a view of the clifftop citadels across the water.

It’s also worth making the trip out of town to Abalak. The monastery there, high above the river, gleams with new whitewash.

Omsk took over as the Siberian capital in the early 19th century. The painter, Mikhail Vrubel, was born in the city and the excellent Art Museum has a characteristically impressionistic floral triptych and a statue outside. Other city monuments include a silver workman in a manhole. The Historical museum has a mammoth skeleton, shamanic stone-carvings and mock-up yurts and izbas.

This modern industrial city has some older mansions, including the home of piratical Admiral Kolchak, arctic explorer turned royalist minister, near the town beach. The memorial to white army forces in the center of town is a reminder that this was an anti-Bolshevik stronghold. Good cafes and bars are a bonus, but the best way to see the town might be from the back of a boat, cruising down the Irtysh River past wooded islands to the trans-Siberian railway bridge. Trips cost 250 rubles for an hour or so.

The university town of Tomsk is 15 hours away on the night train. This “Siberian Oxford” has a great student-y atmosphere with plenty of cheap bars and Internet cafes. It’s a beautiful place to spend a couple of days, with ornately carved wooden mansions and the wide Tom River. The tram, at seven rubles a ticket, is great for exploring. The number two tram runs from the railway station along picturesque Ulitsa Sovetskaya all the way up to foot of Resurrection Hill, where the Historical museum has a wooden reconstructed fire tower on top for fabulous views. The city’s other museums include a Museum of Repression, housed in the old NKVD prison. The garden, opposite the lively Trinity Square, with its fountains and horse rides, contains several monuments to victims of political oppression.

Novosibirsk has everything you would expect from Russia’s third largest city, including great museums, hundreds of cafes and an opera theatre bigger then the Bolshoi. There is a friendly center dedicated to the artist and spiritual guru Nikolai Rerikh, whose numinous paintings of snow-capped mountains you can see in the huge, 1920s art gallery around the corner on Krasny Prospekt.

This huge city has grown in just over a century from a railway workers’ settlement to a lively metropolis. New developments are rapidly replacing the older buildings, but there are still a number of early-20th century wood or brick houses hidden on the quieter back streets to the west. One pair of ornate mansions with carved eaves, on Ulitsa Gorkogo, houses the museum of Soviet memorabilia (re-opening in September) and the museum of birch bark. The gold-domed chapel on Krasny Prospekt marked the midpoint of Russia in 1915. Farther down the road, the neo-byzantine Alexander Nevsky Cathedral was built in 1898.

From Novosibirsk, you can go on into the rugged Altai region for more adventures. The city’s hospitable infrastructure will provide the perfect contrast to a week in the wilderness.

Night trains between these cities, usually cost between 1,500 and 4,000 roubles for a bed in a four-bed coupe. There are great views of Siberian woods and rivers from the window.

The new Georgievskaya Hotel, 35 Lenskaya Ulitsa, (email: hotel-georgievskaya@yandex.ru) is very central with a reasonable restaurant. Cafes in the older parts of town are currently in short supply. The summer tent near the Sophia Cathedral, with jars of wildflowers on the table, can provide snacks.

The central Hotel Ibis Sibir (www.ibishotel.com/gb/hotel-6725-ibis-sibir-omsk/index.shtml) looks inviting and has rooms from 2500 roubles as a summer deal. If you’re on a really tight budget, you might go for a 750-rouble bed in the “Stroiservice” on Gospitalnaya Ulitsa, but its grimness does little to improve the bleak impression of the grey Omsk suburbs.

Kaffee Berlin on Ulitsa Lenina should cheer you up and the bakery next door does fresh garlic rolls for five rubles. The Kolchak Irish Pub is another good hangout. http://www.kolchakclub.ru

The University’s own guesthouse, at 49 Ulitsa Lenina (3822/528386) makes a good place to stay in Tomsk. Twin rooms are 2500 roubles. The People’s Bar and Grill, 54 Prospekt Lenina, does great pizza and the town has plenty of congenial cafes.

The budget Centralnaya hotel (www.hotel-1.ru/en) does beds from 500 roubles and has a good location, near to the regional museum on Ploschad Lenina. There is no shortage of places to eat. The Kafela coffee shop, in one corner of Pervomaisky Square, does fresh waffles with fruit, while the pizza restaurant above it has a roof terrace and a bargain business lunch.