After decade in obscurity, modern dance steps out In Russia 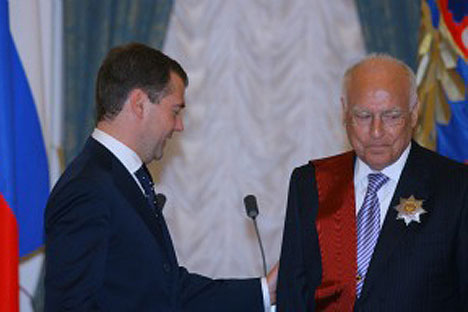 As patrons wait in line outside the Joyce Soho Theater in Manhattan, a slender, barefoot blonde girl in Lycra tights and an apron stands nearby on the sidewalk. Suddenly she launches into a cascade of improvised dance movements, throwing herself into the throngs of startled passersby.
So compelling was the spectacle, that even jaded New Yorkers, who rarely look twice at sudden outbursts of street theater, stopped and took notice.

Unknown to those on the street, a video of Natalia Lisina's mischievous and light-hearted routine is playing inside the packed theater. Moments later, Lisina, a native of Kazan, joined three other Russian dancers on stage for an impromptu performance.

In the audience to watch this unconventional display of modern dance was an iconic figure of Russian classical ballet, Mikhail Baryshnikov. After the performance, Baryshnikov chatted approvingly with the young dancers.

For Lisina and her three colleagues — Tatiana Domovidova, Ksenia Belenkova and Pavel Kurov — the event marked the latest and most thrilling step in a long road that took them from provincial Russian cities like Kazan, Tomsk, and Vladivostok, where few appreciate modern dance, to performing in New York, the city that was the art form's birthplace and remains its epicenter.

The program in New York, Lisina says, was so intense that they needed time to fully comprehend it. "This was so concentrated, there were classes for composition, for technique, lots of modern dance," she says. "I am actually interested in the synthesis of dance and theater. There is plenty of information, right now I am digesting it. Tons of impressions, mostly positive."

Lisina began dancing when she was 5 years old. Her parents enrolled her in a section for rhythmic gymnastics but she had a change of heart after seeing a classical ballet performance. Lisina was then accepted into a special Kazan high school for the arts, where she studied ballet and music.

"During my second year I went to Moscow for a summer workshop of modern dance. My eyes popped out," Lisina says. "When I got back [to Kazan] I was full of ideas, which I was staging at the modern-dance department of the Arts Institute. It's a new department, we are their second class, it all began with us."

Lisina's teachers in Kazan noted her physical flexibility and enthusiasm for modern dance, and they encouraged her to pursue her passion further.

In 2007-09, Lisina attended summer workshops in Moscow at the dance agency Tsekh. Established in 2000, Tsekh, which employs prominent choreographers from the United States and Europe as guest instructors, is the preeminent center of modern dance in Russia.

At Tsekh, Lisina took master classes with Ana Buitrago of Spain, Joao Fiadeiro of Portugal, and Virpi Juntti of Finland. These choreographers encouraged her to continue with her modern-dance explorations and played a crucial role in her artistic development.

In 2009, the 22-year-old Lisina was accepted in the school for modern dance in Outokumpu, Finland, where she enhanced her technical abilities and felt more confident as a choreographer. In early 2010 she returned to her native Kazan, where she tried her hand as an independent choreographer.

It was a bold and risky move for the aspiring young dancer and choreographer. Outside of metropolitan centers like Moscow and St. Petersburg, modern dance is hardly known in Russia:

"It was difficult for me, I think it's not possible [to make a living]," Lisina says. "To teach modern dance in a school [in Russia] — too difficult to survive on that."

But she got a big break last year, when Kazan State University initiated a program commissioning modern-dance works from younger choreographers on the condition that they employ nonprofessional dancers.

"It was pretty cool, because as a rule people who are not professionally involved with dance are more open toward movements, they were excited," Lisina says. "It was a pretty good and productive 2009 for me."

And 2010 has been even better for Lisina. In April, she was accepted into a program sponsored by CEC ArtsLink, a New York-based nonprofit organization promoting cultural exchange between the United States and Eastern and Central Europe, Russia, Central Asia, and the Caucasus.

In addition to performing arts and dance, CEC ArtsLink also awards residencies in literature and visual and media arts.

Masha Pyshkina, CEC ArtsLink program director, says the program targets artists in the early stages of their careers, but with visible potential for development.

"There's no open call, there's no application for it, it works through a nomination," Pyshkina says. "So for each residency we approach a group of several nominators in Russia and these are people who can be considered experts in a particular field, so for example with these choreographers these are people who run dance schools and dance festivals and are dance critics across Russia."

Lisina was recommended for residency by Elena Tupyseva, the director of Tsekh, and by well-known Russian modern-dance instructor Sasha Pepelyaev. She impressed the nominating committee with her fresh approach toward modern dance and the willingness to take on less-explored venues of choreography.

Getting accepted into the ArtsLink program gave Lisina the opportunity to work in the country where modern dance was pioneered in the early 20th century by the likes of Isadora Duncan, Ruth St. Denis, and Martha Graham.

Just as Lisina was preparing to leave for the United States in June, she got more good news — an acceptance letter for the masters program in modern dance at the State University of New York.

Domovidova, Belenkova, and Kurov — the three dancers who joined Lisina on the stage at Manhattan's Joyce Soho Theater — also participated in the CEC ArtsLink program. All four were visiting the United States for the first time.

The four were guests at the prominent American Dance Festival in Durham, North Carolina, in late June and early July and participated in workshops. They also nurtured important professional contacts. What they have seen in the United States, the four say, contradicts sharply with the dance scene back home.

Belenkova, who is an independent dance performer and choreographer in the Siberian city of Tomsk, says modern dance there is still perceived as an oddity.

"I arrived there three years ago immediately after I completed my studies in Novosibirsk," Belenkova says. "It is a complicated picture in Tomsk, audiences are still puzzled — what is modern dance, they are perplexed over it, think it is some kind of avant-garde dance, where did it come from? In Siberia these [dance] movements are in a pretty dismal state."

Likewise, Domovidova, who is a choreographer and the artistic director of the Kauri Dance Company in Vladivostok, says that when she staged her first modern-dance production in the city a decade ago, reactions varied but were mostly negative. Now, however, she says that "people are better informed" and her dance company has "a devoted following."

Modern dance is gradually gaining artistic legitimacy in other parts of Russia as well. In Kazan, Lisina says, despite numerous obstacles hers and her fellow choreographers efforts have not been lost.

"With every passing year, the response is getting better," Lisina says. "Sometimes it is negative, sometimes it is positive. Before there was no response at all and no audience. Now we have an audience."