No Russian in the land of Potemkin 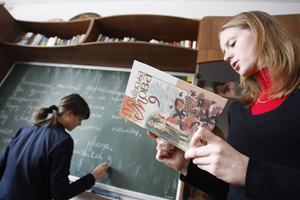 ODESSA, UKRAINE - A newcomer to Odessa, a city of 1 million people on the Black Sea coast of Ukraine, gets a strange feeling. Everyone in the street speaks Russian, but all the street signs, shop names and advertising are in Ukrainian.

The two languages are so close that it does not require too much effort to guess the meaning of a sign, even if you only know one of the languages. And for a true Odessite, this difference is even less of a problem than for a person from any other city in the world. The “pearl by the sea,” as Odessa was called after its founding in the late eighteenth century by Catherine the Great, the city in its golden age was a “porto franco,” a free trade zone and the most ethnically diverse city of the Russian empire. Jews, Greeks, Bulgarians and people of every possible other creed felt themselves at home here. Later, this fact helped émigrés from Odessa feel at home in New York, where they make up most of the unique Brighton Beach community. However, in Odessa as in New York, in Moscow as in Tel Aviv, the language in which Odessites of various backgrounds communicate with each other is Russian. Inside the city itself, the discrepancy between the spoken language and the written one is explained by Ukraine’s language laws, which continue to view Ukrainian as the country’s only state language.

The citizens of Odessa, known worldwide for their humor, have put up with worse things, including three long years of Nazi occupation in a city known for its Jewish heritage, so they play the game the Ukrainian government forces them to play. After all, the famous Potemkin villages, where Catherine’s famous courtier created an illusion of prosperity for foreign visitors, are located on the outskirts of Odessa. After Russia won this territory from the Turks in the late eighteenth century, the northern coast of the Black Sea was settled by Russians and Jews, and was called New Russia (Novorossiya). Eager to please Catherine and her foreign guests, Potemkin took them on a tour of this “last frontier” of Russia, showing them the newly settled villages. One of the visitors, a Prussian king, however, had the indelicacy of noticing the same cow with a damaged left hind hoof in three “affluent” villages. Later, the Bolsheviks, sure of their grip on power in the Soviet Union, merged this territory with Ukrainian Soviet Socialist Republic, which bordered Novorossiya on the north. And so, when the Soviet Union collapsed in 1991, Ukraine became an independent country and Odessites suddenly woke up as Ukrainians. Since then, the entirely new kind of Potemkin village was constructed at the same site, ostensibly called “One Nation – One Language.”

Street signs, however, are not the biggest inconvenience. The biggest inconvenience is the old Soviet and new Russian movies, which Odessites love, but which the law requires to be dubbed in Ukrainian. This is done both in movie theaters and on television. The affluent Odessites can watch Russian television via satellite dishes, but what about the poorer ones who want to hear their beloved actors’ real voices and not the faceless translation?

“This situation is absurd. People just stopped going to the movies,” said Viktor Leskov, a bearded citizen of Odessa talking to me on Yevreyskaya street. “Why does the government want to make idiots out of us? Why do they keep pretending that they liberated us from our own language? Why do I need to stop speaking my mother tongue?”

Since the victory of Viktor Yanukovich in the presidential election earlier this year, the situation changed somewhat.

“We are trying to solve the problem by showing movies with Ukrainian subtitles,” said Dmytro Tabachnik, the new Ukrainian minister of education. “We are also planning to let the minorities pass their entrance exams in their native languages.”

This second comment tackles Ukraine’s second biggest language problem. In order to force the children from Russian-speaking regions learn Ukrainian, the two previous administrations—of presidents Leonid Kuchma and Viktor Yushchenko—made Ukrainian the only language in which the universities and other institutions of higher learning could hold their entrance exams. Besides a Russian-speaking minority numbering in the multi-millions, Ukraine also has small Hungarian and Romanian minorities. However, speaking about the Russian minority per se is considered politically incorrect in Ukraine, so Tabachnik, already under attack from those who support the language laws, speaks about all minorities. His plan is to show that the liberalization of language policy will benefit not only Russians.

“We are going to found Ukrainian-Polish universities in our two countries. We hope that a return to cooperation with Russia in scientific field will make both Russian and Ukrainian scientists more quoted in the global scientific media,” Tabachnik said. “We also want to return studies of Russian classical fiction to Ukrainian schools.”

Under the Yushchenko administration, Alexander Pushkin, Mikhail Bulgakov, Lev Tolstoy and other Russian writers were studied in Ukraine as “foreign” authors, which means that they were studied only marginally, despite the fact that Ukrainian schools have a long tradition of studying these authors, some of whom (like Bulgakov) were born in Ukraine, grew up here or wrote volumes about the country—in Russian. According to Tabachnik’s plans, Ukrainian secondary school students will be given an opportunity to study these authors in original and not just in Ukrainian translation as part of a special new course on World Literature.

Tabachnik’s plan provoked an outcry from Ukraine’s “Orange” opposition, which sees these studies as a betrayal of national culture. It is interesting to note that some Western scholars of Ukraine, while poking fun at President Yanukovich’s inability to pronounce correctly the name of the Russian poet Anna Akhmatova, support the drive against Tabachnik. This—despite the fact that a continued “de-Russification” of secondary education may lead to fewer and fewer children actually knowing who Akhmatova was.

Yanukovich is a native of Russian-speaking eastern Ukraine, and there is already a serious rift inside the team that helped him win the election as the president is accused by many of dragging his feet on the language reforms that he promised during the campaign. These reforms include giving regions, including Odessa, the right to give Russian the status of an official, although not state, language. Recently, Yanukovich explained that Ukrainian will stay Ukraine’s only state language. According to polls, Odessa citizens are fine with Ukrainian as a state language, but find the idea of Russian as a foreign language unacceptable. The idea of Russian language as “foreign” in this land of Potemkin villages is a lot like a typical Odessa joke—both funny and bitter at the same time.