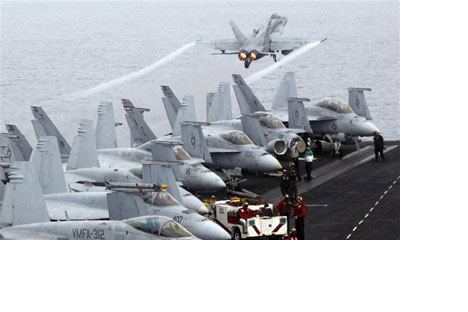 The cooperative actions of combat units dealing with acts of terrorism aboard civilian jets and hijackings will be simulated, the North American Aerospace Defense Command (NORAD) and Russian officials have said.

In what is seen as a step forward in cooperative efforts to combat terrorism, Air Force personnel will operate from command centers in Russia and the US. According to the scenario, Russian and US fighter jets will shadow commercial flights “hijacked by terrorists,” NORAD, the bi-national US and Canadian command, said.

One flight starts from Alaska and heads toward the Far East, while another is an Alaska-bound flight taking off from the Far East. The fighter aircraft will have to establish the situation and follow the aircraft.

The exercise will focus on the cooperative hand-off of the monitored aircraft between the fighters and refueling aircraft from both countries. The training will involve airborne warning and control aircraft from Russia and the US. Civilian air control agencies, Russia’s Federal Air Navigational Service and the US Federal Aviation Administration will also take part in the exercise.

The main headquarters of the exercise will be based in Russia’s Khabarovsk and Colorado Springs in the US, Russian Defense Ministry spokesman Lt. Col. Vladimir Drik told Interfax on August 3. The back-up headquarters will be located in Petropavlovsk-Kamchatsky in Russia and Anchorage in Alaska, he said.

Russian and US officers will also be present onboard the allegedly hijacked airplane, Drik noted. The airplanes participating in Vigilant Eagle 2010 will not be equipped with live weaponry due to security considerations, the spokesman added.

The event is authorized under a cooperative military agreement between the Russian and US presidents. This combined effort provides the opportunity to “cooperatively detect, track, identify, intercept and follow an aircraft as it proceeds across international boundaries,” NORAD said in a statement.

The results of the event will be analyzed in September, when representatives of the Russian and US armed forces will meet in Colorado Springs.

The article was first published on rt.com
http://adm.rt.com/Politics/2010-08-03/vigilant-eagle-counterterrorism-exercises.html