A new status quo in the Caucasus 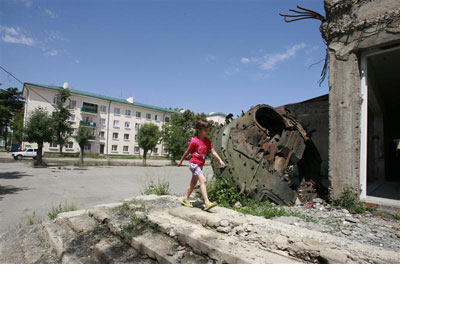 A girl walks past a tank turret, destroyedduring Georgia's war with Russia over SouthOssetia, in Tskhinvali, July 23, 2010 source Vostock photo

In August 2008 the long-simmering Georgian-Ossetian dispute erupted in a five-day war with direct military involvement on the part of Russia. This armed confrontation between Georgia and South Ossetia was the third in 17 years. However, judging by its consequences, it differed fundamentally from the two preceding ones (1990-1992 and August 2004).

Until 2008, ethno-political conflicts in Eurasia were not the focus of the global agenda. In the United States and Europe they were called not only “frozen,” but “forgotten.” The five-day Georgian-Ossetian war, the first of its kind since the collapse of the Soviet Union, turned the former Soviet space into a region of particular concern almost overnight. During the first days of the war, the situation in South Ossetia was discussed three times by the U.N. Security Council. Such pronounced interest in the Caucasus is easy to explain.

It was in the Caucasus, after the Soviet collapse in December 1991, that the principles that determined the official, internationally recognized borders of the former Soviet republics (sometimes known as “Belovezhsky nationalism”) were first established. And so, it was in the Caucasus that the first precedent was set for revising borders between republics of the once united Soviet state. The Caucasus was the first region in Eurasia with partially recognized states—states whose independence is rejected by the U.N., but recognized by Russia, a permanent member of the Security Council. Such separations were effected de facto by Abkhazia in September 1993, by South Ossetia in June 1992, by Nagorno-Karabakh in September 1991, and by Chechnya in November 1991. The process of lawful recognition of these separatist projects may go on for years and years. Abkhazia or South Ossetia, like the Turkish Republic of Northern Cyprus, may not receive a single new recognition for decades, but nevertheless, the precedent for changing the borders of former Soviet republics has been established. On August 26, 2008 Russia recognized the independence of two former Georgian autonomies. Moscow’s lead in this was followed, with various nuances and reservations, by two Latin American nations (Nicaragua and Venezuela) and the small Oceanic state of Nauru.

Thus, the main result of the 2008 Georgian-Ossetian confrontation was the creation of a new status quo in the Greater Caucasus, although this process cannot possibly be considered finished. What are the features of this new order? First of all, in 2008-2010 the political agenda for Abkhazia and South Ossetia saw significant changes, including a serious redistribution of priorities between topics of domestic and foreign policy. For these partially recognized states, instead of the problem of fighting for independence, the top priority is now the quality of that independence. Instead of the Georgian factor, now the Russian factor plays a role. For Abkhazia, another new priority is the problem of Russia’s economic and military-political presence in the region. This subject largely defines the dividing line between the Abkhazian authorities and the opposition. For South Ossetia, the most important question is the organization of control over the distribution of financial aid from Russia to rebuild the republic. Secondly, August 2008 deprived Russia of some of its leverage over Georgia, which is now closer to the United States than it was before the war. The advent of a new U.S. Administration did not play a defining role here. This was shown by U.S. Secretary of State Hillary Clinton’s July visit to Tbilisi where she described Russia’s policy as the “occupation of Georgian lands.” However, all of this only strengthened the new status quo. The United States and NATO do not have the resources to smash Russia, and Russia does not have the opportunity to go deep into Georgia.

Russian-Georgian relations aside, the new status quo has affected other countries in the region—primarily Armenia and Azerbaijan. August 2008 showed that a unilateral dependence on the dynamic of Russian-Georgian relations cannot define the foreign policy perspective of Yerevan. As a result, there is a greater interest in normalizing Armenian-Turkish relations than has been seen since 1993. The Armenian-Turkish dialogue has become an influential factor in regulating the situation in Nagorno-Karabakh. An absolute majority of proponents of Armenian-Turkish normalization insist on the need to separate the peace process in Nagorno-Karabakh and reconciliation between Yerevan and Ankara. But in reality, these two processes have merged. As a result, instead of the expected breakthroughs, we see a deceleration in both areas. This happened because the automatic combining of problems in two contested areas led to the appearance of new challenges that had not before been considered substantial. The increase in militarist rhetoric on the part of Baku, for example, has allowed Azerbaijan to pressure Turkey into not making compromises with Yerevan. Even Iran is trying to take part in creating a new status quo in the Caucasus. Tehran is extremely sensitive to the emergence of any new players in the region, which is why it has made efforts to influence the settling of the Nagorno-Karabakh dispute. In April 2010, Iranian Foreign Minister Manouchehr Mottaki announced that Tehran had drawn up a set of proposals that could be viewed as an alternative to the “renewed Madrid principles” (signed by the presidents of the United States, Russia and France). Iran would not like to see a resolution to the conflict in Karabakh that involves international peacekeeping forces stationed (under whatever flag) in the region.

The Russian-Georgian clash of August 2008 again confirmed and increased the political role of the republics in the Russian Northern Caucasus. During the August conflict, the Vostok battalion—composed of ethnic Chechens, but a regular unit in the Russian Army—participated in operations against Georgian forces in South Ossetia. Also at that time, representatives of ethno-nationalist movements in Kabardino-Balkaria, the Karachaevo-Cherkessia and Adygea were ready to send their volunteers to the region. This forced people to recall the Georgian-Abkhazian war of 1992-1993, in which Abkhazia’s victory was made possible in large part by troops from the Confederation of Mountain Peoples from the North Caucasus. This time around, there was no uncontrolled participation of volunteers. However, after 2008, there was a qualitative increase of the Cherkessk national movement in the Russian Northern Caucasus—Abkhazians consider Russian Cherkessks a fraternal people. Emergency congresses of the Cherkessk people in 2008 and 2010 discussed demands for a separate Cherkessk republic within the Russian Federation.

In addition to these significant repercussions in the Caucasus, the events of August 2008 and their consequences extend far beyond the bounds of the Caucasus region. What happened demonstrated the obvious impossibility of effective and, more importantly, legitimate international arbitration. Rather than mediating between the warring parties, the leading world players took sides themselves. The United States and its allies supported the “territorial integrity of Georgia” and turned a blind eye to the brutal methods of resolving the given problem, while Russia unilaterally traded its status of peacekeeper for the role of military-political patron of two former Georgian autonomies. At the same time, the “major players” were counting not on the international legal system, but instead on the principle of unilateralism. Unfortunately, since 2008 this trend has only grown stronger. For example, the recent decision of the International Court of Justice concerning Kosovo showed just how cut off from political reality formally lawful topics are. The judges made their decision based not on all the legal and political circumstances taken together, but on a single declaration made by Kosovo’s Parliament on February 17, 2008. The events of the last two years are one more confirmation of the fact that the Yalta-Potsdam version of international relations does not work, while a new, post-Yalta model has yet to take shape. Until one does, there is little hope for active and effective international participation in resolving disputes like those in the Caucasus. To expand the role of international players in resolving outside conflicts, it is essential that general criteria and rules of the game be elaborated to guide the top players, rather than allowing them to rely solely on their idea of what is and is not permissible.

Sergei Markedonov is a Visiting Fellow at the Center for Strategic and International Studies (CSIS), Russia and Eurasia Program (Washington, DC)