To ban or not to ban? 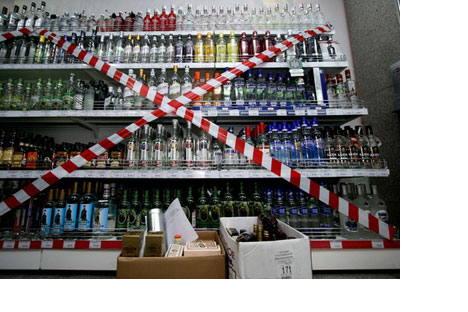 Most Russians (74 percent) are for the existing ban on sales of spirits between 11 pm and 8 am in the Moscow region, according to a poll by the Levada Center. 21 percent are against the measures. The ban on selling alcohol stronger than 15 percent between 9 pm and 11 am took effect in Moscow region beginnig May 2. The only places that can sell alcohol are restaurants, bars, etc and duty free shops in airports. Similar projects have been suggested for other regions of Russia.

The poll was conducted across Russia and suggests that 42 percent of Russians drink strong alcohol about once a month or less, 14 percent drink two-four times a month, 9 percent drink once a week and 6 percent, several times a week.

According to the poll, 28 percent of Russians don't drink at all, compared to 25 percent in the US, and, claims The Daily Mail, a mere 7 percent of Brits.

Since the ban on sales came into force, there are positive feelings towards it among those who drink a little, but often. Most teetotalers-84 percent-are for the ban. Among those who drink, 58 percent support the ban and 26 percent are against it.

Those who drink a lot are less likely to support the ban, Levada Center sociologist Denis Volkov told Gzt.ru. However, public opinion is quite diverse, and it is impossible to give a single reason for the poll’s data.

Some respondents explain their support for the ban with a desire for increased security and decreasing crime. But the majority support the initiative just because it comes from the government, Volkov said. For them it means that the state is taking care of its citizens, and banning things is one of the things that authorities must do.

However, the results of the poll do not seem entirely credible, as it claims that 34 percent of students said they don't drink at all. This strikes an incongruous note in an alcohol-soaked youth culture.

Meanwhile, Sergei Mironov, speaker of the Federation Council, has suggested a total ban on advertising of all types of alcohol, according to an announcement from the council’s press service announced.

“Our task is to protect out children and teenagers from the temptations of alcohol,” he said.

Advertising alcohol “in a country where people drown and die on the roads daily while drunk, where alcoholism is a national curse as it is, should be banned,” he said.

Will the ban be effective?

Beer and most wines are still available, as the ban only affects alcohol over 15 percent, and despite the bans on advertising and sales, it seems unlikely that alcohol is going to completely disappear from the youth culture.

One Russian Facebook user’s status expressed a common feeling among his well-traveled young compatriots, who have spent time in countries with bans on alcohol sales. “One definite plus of Russia is that it is easy to buy beer after 10 pm," as compared to countries with more extensive bans on alcohol sales. "even at 11 pm, and even more after midnight! I’m enjoying it!” the post continued.