Day of the Construction Workers 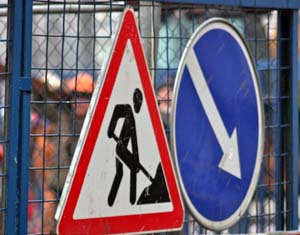 The second Sunday in August is Construction Workers Day! Since 1956, this holiday has been celebrated with a view to encouraging the sector to, as the governement decree established, “further industrialization, raise the level of quality, and reduce the cost of construction.”
Hmmmm…Things haven’t quite worked out that way, but I suppose you have to have something to work towards.

I can’t think there will be much dancing in the streets today: the construction industry is not dear to Russian hearts. Construction companies, particularly state construction companies, are widely understood to be swindlers, thieves, bandits, money launderers and purveyors of shoddy products, delivered way over schedule and budget. So that’s a bad start. Then, there are the construction workers themselves, who tend to be imported from what Russia calls “the near abroad,” and therefore are considered twenty or thirty-second class citizens. “They are dirty,” said one Russian woman, about the men who were working on her apartment, wrinkling her nose, and I thought “Duh…of course they are dirty: they live at the construction sites…they have no real bathroom facilities or hot water: what do you expect?”

The fact that construction workers take up residence at the site where they work is a source of endless fascination to my foreign friends. HRH, Velvet and I spent about two years visiting the site of our new apartment, which was usually rigged up as a refugee camp: the (male) Ukrainian plasterers set up a temporary dormitory of folding cots in what would eventually be the library, whereas the (female) Moldavian painters had their accommodations in Velvet’s room to ensure discretion and privacy for all. Whatever the time of day we came, there was always a big pot of soup on the little electric stove, and I always felt as if we were intruding. We passed a number of deadlines for completion, which is charmingly referred to in Russian as the construction workers "giving" us the project. Ha ha ha ha.

Finally, I told HRH we were going to just move in with the workers, because that would be just about the only thing that would shift them. You could see their point: there they were, in a 6 room apartment in Central Moscow with four toilets and a beautiful rooftop terrace...would you have wanted to move? They were astonished to see us pull up with the truck from the "Delicate Move" moving company. We cohabited for about two weeks, until they finally took their soup pot off to a different site.

Construction is everywhere you look in Moscow – great gaping holes in the city, snarling up the traffic and necessitating long detours on food through rickety scaffolding cover. Belorusskaya Square, which is around the corner from our house (which doesn’t smell like construction worker soup anymore), is home to a large train station, and the gateway out of the city from the Kremlin to the north. It has been under construction for the past five or six years, and, as far as I can see, it will be so for the next five or six.