Police to get new name in reform 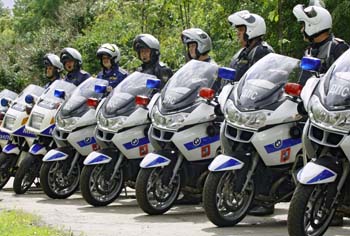 Medvedev rolled out his much-anticipated bill to reform the Interior Ministry on Saturday, but it remained unclear whether the legislation would bring about any change more substantial than a name change.

The bill, which is to replace a 1991 law on the police, aims to compile all the rights and responsibilities оf the police, whose activities are currently regulated by hundreds of additional laws and bylaws, Interior Minister Rashid Nurgaliyev wrote in a commentary attached to the legislation. Medvedev said in his own commentary that the bill should clearly define the police force's sphere of activities and close all loopholes for potential abuse of power. He said the bill should be the only legislation that citizens need to consult to know the police's powers.

The old police law is used as the foundation for the draft but is expanded from 43 articles to 57 and is almost twice the size, Nurgaliyev said.

The 11-chapter draft was posted on the government's web site Zakonoproekt2010.ru on Saturday, and viewers are encouraged to comment on it on the site. More than 2,000 comments were posted 24 hours after the draft was put online.

The bill is expected to be submitted to the State Duma in the fall after undergoing a review by the Public Chamber, said Anatoly Kucherena, head of the chamber's commission on police reform. It would come into force on Jan. 1.

The biggest obvious change that the reform offers is renaming the police force from "милиция" to "полиция." The Bolshevik government introduced its “worker and collective farm militia” in 1917 to differentiate the force from the tsarist police, a longtime enemy of the revolutionaries.

Medvedev announced the name change Friday, saying the police needs “professional, effective employees … so I think the time has come to return its name,” Interfax reported.

Medvedev did not say how much the name change would cost the state, which would have to buy new uniforms, repaint vehicles and replace official stamps, among other things.

Internet users who posted comments about the bill on the government's web site were more interested in how the police would be able to treat citizens than how much the name change would cost. The draft offers some notable improvements on the current law, they said, because it not only prohibits police officers from torturing people but also obliges them to prevent fellow officers from doing so.

Lev Ponomaryov, head of the Committee for Human Rights, praised the draft for including many proposals from human rights activists but said it still afforded opportunities for abuse. He cited as an example an article on the legal framework for police work that says, “All actions of a police officer are assumed as legal unless otherwise stated by legal procedures.”

The bill's chapter on police work contains vague wording that makes it “much tougher toward citizens” than the current law, which provides a clearer definition of the work, said Eduard Sukharev, a civil lawyer. The bill also gives no clear definition on how public control over police would be enforced.

Sukharev added that “many police officers currently have very little understanding of the existing laws required for their duty.” As if echoing Sukharev's reservations, Nurgaliyev said Friday that police officers would undergo regular tests on the Constitution and other laws.

Alexei Volkov, deputy head of the State Duma security committee and a retired police general, said vagueness in the police bill could undermine the Kremlin's hopes to fight corruption through transparency. "The police system should be transparent,” he told The Moscow Times.

Volkov, a member of the ruling United Russia party, praised Medvedev and Nurgaliyev for posting the bill online for public review.

But Gennady Gudkov, a fellow committee member from A Just Russia, remained skeptical, saying the timing for a discussion was questionable because many Russians were distracted by smog and wildfires. “Who is going to discuss it? People who can hardly breathe because of the smog?” he said.

One key proposal from human rights activists that did not make the draft was for elections for the chiefs of local police precincts, which the activists said would give officers more public support.

Instead, the bill proposes for centralization by making the whole police force funded by the federal budget. Currently, the police are divided into the federally funded “criminal police department” and the regionally funded “public safety police."

Volkov said a fully federally funded police force would cut police officers' dependence on governors. “They will not have to bow low to them in order to obtain financing,” he said.

A new police law is just one step proposed by Medvedev to reform the police force, which is ranked as the most reviled state institution in polls. A March survey by the Levada Center found that about 70 percent of Russians do not trust the police.

The reform also proposes the dismissal and re-evaluation of every one of the 1.2 million police officers nationwide by October, with only 75 percent of the current staff hired back. But many observers have questioned the reform, pointing out that Medvedev has not replaced the unpopular Nurgaliyev, who was appointed by then-President Vladimir Putin in 2004.

“The reforms will be carried by the same people who brought the police into disgrace,” Ponomaryov said.