Moscow in the Murk 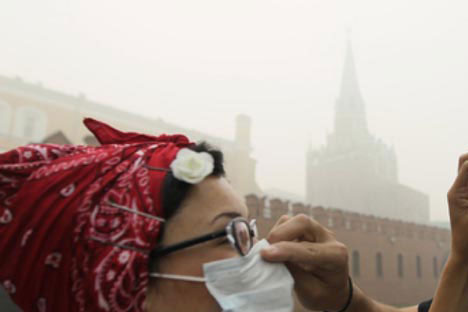 Today I look out the window and can only just make out the features of the nearest building – everything is obscured by smoke from forest fires. On the radio, they announce that the record for the highest temperature in Moscow (+40 C) has been broken on several days in a row. I want to pinch myself and wake up. Sadly, it’s no dream.

It all started so nicely. When the sun finally peeped out after the protracted rains of June, everyone felt like jumping for joy. At last! The weather in Moscow is an eternal topic for jokes. “What a short summer we have!” is what we usually say to each other, when after two or three hot days the weather deteriorates in habitual fashion. If in summer the temperature exceeds +25 C for more than two weeks in a row, Muscovites consider themselves lucky. And if one gets to wear a sundress more than three times in a season, it’s a cause for celebration. Usually summer clothes are only required for resort holidays.

When the thermometer started to head toward +30 C, it was surprising, but bearable. Men began appearing on the street in shorts, and women pulled their cherished sundresses from the closet. But suddenly previously recorded high temperatures were being broken one after the other +33, +35, +37! And this was only the beginning. On several days the temperature in Moscow hit +40, as if it were somewhere in Cyprus. But unlike Cypriots, who are used to such temperatures from childhood, Muscovites were completely unprepared. It became impossible to be at home because the majority of Moscow apartments don’t have air conditioning. Not because people can’t afford it. It’s just that until recently the demand for air conditioning by Muscovites was comparable to demand for central heating by people living in a hot climate.

In offices, of course, air conditioning is a necessity; there are too many people and too much technical equipment. But at home it was perfectly sufficient to open a window in order to air out the premises. This is the reason the ex-husband of a friend of mine went bust. His firm was selling those same air conditioners that nobody wanted. Out of grief, he threw it all away, wife and job, and moved to the US. Now he’s calling her every day with the words, “What a fool I’ve been!” Fans that cost 500 rubles in the springtime can now be found on the internet from 5000 rubles. Anyone who had known in advance could have put their spare money into fans. After this summer, there will no doubt appear people who made themselves rich in this manner.

But it turned out that +40 isn’t the worst. It can be much worse. At one point Muscovites literally woke to the smell of smoke. Some burst out into the hallway thinking that there was a fire in the building. But it soon became clear that it wasn’t an individual flat that was burning but literally the entire city, in fact the greater metropolitan area. From the intense heat, the peat bogs in the Moscow region caught fire. This is a long-time problem for the capital, which no one has paid attention to for years. Moscow was once surrounded by unbroken forest and impassable bogs. In the 19th century, they began draining the bogs in order to make use of the freed-up land and harvest peat for heating. Peat harvesting was particularly active in the first half of the 20th century. Then oil and gas took its place, and the peat fields were discarded. Then they started to burn. Sometimes from campfires started by careless tourists. Sometimes even by shards of glass, refracting a ray of sun. Usually the area of the fire was not too large. Inhabitants of the surrounding region of course suffered from the smoke, but insofar as it didn’t reach Moscow, everyone took the view that all was in order. It still is this way in Russia – a problem is not considered a problem as long as it doesn’t affect Moscow. But there is a time for everything, and that time has started. And Muscovites are genuinely scared.

“I want to get out of this city as soon as possible!” my friend called me in hysterics. I can understand her – she has a small child and dog. But the problem is, where to go? You can already smell the burning in the neighbouring regions of Moscow. Smog is the great equaliser – from owners of expensive out-of-town property and to residents of multi-storey panel buildings. What’s the point of an out-of-town cottage if you can’t even go out on the terrace due to the smoke? Of course, those who can are headed literally anywhere their eyes take them. The demand for excursions around Russia has increased sharply “to anywhere that isn’t hot.”

Fortunately, the country is large, and it is possible to go somewhere. Trains to Saint Petersburg are overwhelmed by demand. In the “Northern Capital” it’s a comfortable +26 with no smog. And Moscow has really emptied out in these dark days. Beaches where previously it was difficult to find a free space to sit are now empty. There is no one in the parks. Those who haven’t left sit at home with windows tightly shut. On the blogs, all the conversations are about how to survive the heat and smog. One person wraps himself up in wet sheets, another puts bowls with water on the bed to moisten his burning-hot body. I personally keep a reserve of frozen water in the freezer. I look out the window; the building opposite is, as before, practically invisible. But then I see my neighbour. He is sitting in a cloudy haze in the completely empty courtyard on a bench smoking a cigarette. He has such a philosophically aloof expression on his face (“Eh, so what?”) that I have to smile. If we do survive, then it will certainly be thanks to our sense of humour. In closing, a few excerpts from “Diary of a

Sweaty Muscovite,” published on one of the blogs:

7.12 Woke up when my pillow floated away

7.38 Wanted some coffee. Put the kettle in the fridge.

8.10 Couldn’t decide what to wear to work. Regular underwear is too hot, and string pants irritate.

9.08 In the metro three women were stuck to my spine. I could barely tear them away.

9.15 Entering the office, got scared I’d somehow wound up in the Blue Oyster bar – men in underpants and captain’s hats. Turned out to be security in their new uniform.

9.30 Entire office clubbed together to buy a fan.

11.03 State Duma attempted to hold a session in the deep freezer section of Chill Factory Number 14. Chill factory workers have been defending their positions for 3 hours now.

15.58 The church is in a panic – at this point the fires of hell only cause fear of claustrophobia.


About the Author
Svetlana Smetanina is a professional journalist. She graduated from Moscow State University with a degree in journalism, and since then has worked at “Kommersant,” “Gazeta,” and “Moscow News.” Her professional interests cover a wide range of topics. She writes articles on politics, psychology and personal relationships. But most of all, she enjoys writing about everyday life. For the last year and a half, she has written the column “Surprised by Russia,” which she herself conceived. In her own words, she would like to tell foreign readers about the things that often escape the attention of the serious media. In the first instance, this is the everyday life of Russians with all its problems, sometimes serious, sometimes funny. She is sure that Russia will never cease to surprise the world.