One kilometre of ditches dug by hand 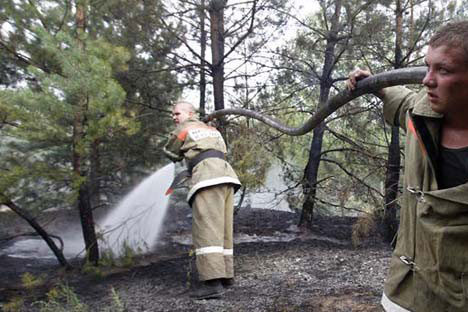 The village of Radovitsky in the south-eastern part of the Moscow region was built in 1946 to accommodate the workers who produced peat for the thermal power plant in Shatura. Peat production declined after 1991 and petered out altogether when the Forest Code was adopted, says village mayor Valentina Kuznetsova. The Forest Code declared all the forests in the Moscow region to be for recreational use, which outlawed peat extraction. To cap it all, two years ago someone dismantled the pump and the pipeline that brought water to the peat fields and created a defense against fires, she says.

The soldiers of the pipeline battalion from the Moscow Military District’s logistical support regiment replaced this pipeline with an army hose. The hoses are designed to carry fuel for army vehicles, but they can be used to pump water over short periods, says the battalion’s senior warrant officer Aleksandr Bogdanov. The Soviet-era canal from which water is pumped into the hoses is easily the least-affected place in the area swept by peat bog fires, although the fires have come within a couple of kilometres.

The heavy smog that hangs over Voskresensk, thirty kilometres away from the fire, does not reach here. The fires struck on 29 July, sweeping in from the Ryazan region and devouring 10 kilometres in 20 minutes. However, Radovitsky was spared thanks to a system of Soviet-built canals and the firemen who had dug ditches around the village of 2000 people. In 1972, when similar fires raged in the area, the village had to be evacuated, Lyubov Petrova, a local woman, recalls.

Peat bog fires can last months or even years, and do not stop even in winter. It is dangerous to try to put them out from the air because that may only increase the number of blazes. So the local authorities, the Emergencies Ministry and the army have their work cut out fighting the fires by pouring water on the peat bogs, says Kuznetsova. She compares the firestorm on 29 July with a living creature because it bypassed all the water soaked areas. She keeps her fingers crossed that there will be no wind to spread the fire from the smouldering peat bogs. The soldiers are deploying a network of pipelines to put out the fires in the Ryazan region, says the regiment’s chief of staff Alexei Akhmetov. Meanwhile a detail of eight soldiers led by warrant officer Bogdanov is on guard at Radovitsky. The problem of peat bog fires can only be solved by allowing the bogs to cover the area or by resuming peat production. When Shaturatorf, the peat-producing company, was operating, the local people slept calmly, says Kuznetsova.

The neighbouring Ryazan district has been closed to civilians, is shrouded in yellowish-orange smog, and the road is lined with the charred remains of buildings that were destroyed on 29 July. The village of Peredeltsy, near the Ryazan headquarters of the Emergencies Ministry, burned down within ten minutes with only two unfinished stone buildings left intact. In three northern districts in the Ryazan region, officer trainees from the Ryazan Airborne School have been drafted to fight the fires.

According to the school’s commander, Colonel Andrei Krasnov, there are about ten blazes in the region. Near Lake Chernoye, trainees are trying to prevent the spread of the fire. One trainee, Aleksandr Akalainen, who hails from Petersburg, says they have been working in the forest since 30 July, as soon as they were back from vacation. Since then they have put out a number of small blazes and dug a kilometre-long ditch to prevent the underground peat fire from spreading. The situation is volatile because the fire can blaze up at any moment. The paratroopers will stay in the forest as long as necessary, says Major Vladimir Rud, deputy commander of the battalion where Akalainen serves.