Appetite for business? Put your money where your mouth is 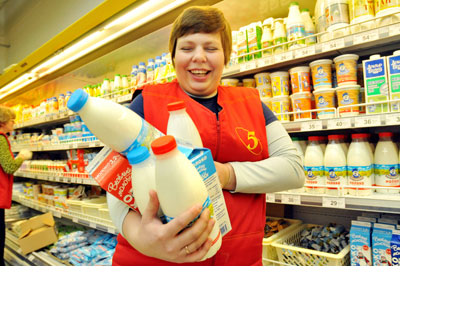 Russia is a dairy lover’s heaven. Any Russian would tell youthat their milk and dairy products are the best in the world

The last two decades have dramatically altered the food business. There is a rich menu awaiting for those with a hunger for new business challenges.
It took Russia’s food market nearly two decades to overcome the hangover of the socialist experiment and the planned economy. At the close of the Soviet era, food stores stood empty, with people queuing for hours to buy even essential products. All this changed in the first decade of market reforms, but other problems arose: imported products flooded local shops, endangering domestic producers new to ways of the market economy.

It was not until the late 1990s–early 2000s that entrepreneurs woke up to the lucrative potential of the food production business. Sergei Lisovsky and German Sterligov were among those who hitched their fortunes to the food business. In the early 1990s, Lisovsky was involved in the entertainment business and even ventured into politics during the election campaign for Boris Yeltsin’s second presidential term. Now, he runs a poultry business, selling chicken. Sterligov toyed with various businesses and was among the first to start a commodity exchange in Russia amid market reforms. He finally settled on the food industry, opening an organic food shop and selling futures contracts on meat.

Strange as it may seem, the latest financial crisis has stoked the appetite of Russian producers and importers. The devaluation of the rouble by more than 30 pс in the first quarter of 2009 drove lower-income groups to cheaper domestic products. As a result, domestic output edged up by 4.8 pс from January to May 2010. The production of meat and meat products was up by 12.5 pс, the manufacturing of dairy products rose by 10.4 pс, while potato, fruit and vegetable production, processing and preservation jumped by 14.7 pс. The processing and conservation of fish and seafood went up by 10.8 pс. The value of food and agricultural exports was up by 8.6 pс during this period. For the first time in many years, Russia’s poultry market saw overproduction, bringing chicken (mostly domestic) prices down by 4.3 pс.

At the same time, the value of imports jumped by 24.8 pс, which the Economy Ministry attributed to the growing volume and value of basic import items.

Russia’s food market is growing, but it’s hard to quantify it. The State Statistics Service has identified 28 basic categories of food products. It is also a resilient market that provides enough room for new players. There are neither serious administrative barriers nor limits in terms of access to raw materials. Refreshingly, vertically integrated companies and price monopolies are absent. “I think food markets are open to new players; there are no insurmountable obstacles to entry,” says Julia Gapon, deputy chief analyst of the Infina financial centre.

The food market is becoming increasingly competitive. In May 2010, food sales made up 49.1 pс of the country’s total retail turnover. Earlier, faced with empty shelves in shops, many Russians turned to open air markets and fairs, but the situation has now changed. By May 2010, retail sales at open air markets dropped to 12.4 pс for both, food and non-food products. Some cities have, however, bucked this trend. For example, the Mayor of Sochi, the 2014 Winter Olympics host, had to create open air food markets in the city to bring local producers to their senses and curb spiraling food prices.

1 kg of tea per Russian

Though tea came to Russia rather late, it has taken firm roots in this country, becoming a part of the Russian tradition. One "samovar" (a heated metal container traditionally used to heat and boil water) was enough to supply this exhilarating liquid for an entire peasant family. Now, samovars are a rarity, but Russia remains one of the world’s largest consumers of tea. An average Russian consumes approx. 1 kg of tea a year. Meanwhile, 99 pс of Russian tea is produced from imported materials, Sri Lanka and India being the largest suppliers (38.7 and 33.9 pс, respectively). According to the ROIF Expert marketing agency, Russian companies produced 143,000 tonnes of tea products in 2008, up by 8 pс from 2007 (133,000 tonnes).

Over 75 pс of the market is controlled by top five producers, including Orimi Trade, May Company, Unilever, Ahmad and Sapsan. The leader is Orimi Trade (28.9 pс of market value and 32.6 pс of volume), which owns tea brands like Greenfield, TESS, Princess Noori, Princess Kandy, Princess Gita and Princess Java. 90 pс of tea packaging facilities are located in the Moscow and Leningrad regions.

Spices too hot for crisis

The spice market has miraculously survived the crisis unscathed. According to MEMRB Retail Tracking Services, the value of this market grew by 21.8 pс last year and it was also up by 3.7 pс in terms of volume. The largest importer is Vietnam, accounting for 25.4 pс of spice imports. It is followed by India, with 11.4 pс. Imports from other countries hover below 10 pс. Indian and Mexican spices are considered the best.

Traditional Russian products have a special place in the hearts and minds of Russians. Kvass (a fermented beverage) can easily be prepared at home using bread and kvass mash. It is also an important ingredient for another traditional Russian dish, okroshka – a cold soup made of cucumbers, greens, radishes, boiled potatoes and meat. Even more popular are blini and pelmeni (though pelmeni is of Turkish origin). Blini (pancakes) are round in shape and prepared from batter poured onto a heated pan. Cooking tasty blini requires an art of sorts: as the popular Russian saying says, the first attempt is always a failure. And pelmeni, a trademark Siberian delicacy, is in a class of its own. Today, only diehard fans of Russia’s traditional cuisine make pelmeni, kvass or blini themselves. Most of these traditional Russian products are available in supermarkets. The ones who are pressed for time to try out culinary adventures can also buy ready-to-eat products (such as blini filled with cheese), heat them in a microwave or on a pan and eat.