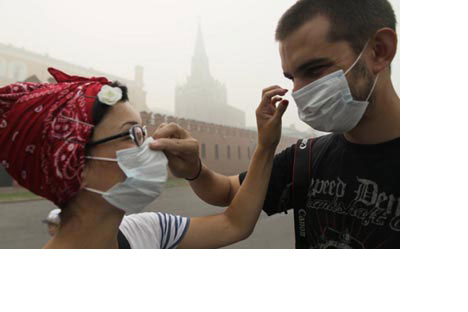 The government has promised 3 million roubles ($100,000) to the 3,500 victims of the fire, who’ve lost their homes. Two-thirds of this will go to rebuilding homes and 1 million roubles on infrastructure.

Russia’s Emergency Situations Ministry has also demanded hundreds of millions of roubles, according to Renaissance Capital analyst Anton Nikitin, but this will have little effect on the country’s burgeoning deficit.

The costs “are [already] implied in the budget as force majeure measures,” said Nikitin.

Prime Minister Vladimir Putin has also called for a further 35 billion roubles ($1.17 billion) in agricultural subsidies. Many farmers don’t have insurance, but those who did take it out are likely to receive state handouts first.

“Though everyone will get aid, it’s a good thing that state and regional authorities are stimulating those who chose to insure their crops,” Anton Shaparin, a spokesman for the Russian Grain Union, said in a recent interview.

The burden is instead likely to fall on consumers after wheat prices jumped 68 per cent since the beginning of July. Around 24 per cent of the average consumer basket is directly related to grain prices.

“We see the drought in Russia pushing grain prices up rapidly, which will immediately drive food inflation,” Renaissance Capital’s agriculture analyst Natasha Zagvozdina wrote in a note to investors.

Russia’s harvest is expected to fall to 75 million tons – down from 97 million tons last year – and the government has enacted an export ban.

The ban could put pressure on grain importing nations, particularly in Asia, but also limit rises in Russian bread prices caused by speculators.

“The Russian government’s action to try to insulate the Russian market and prevent speculation to fully price through into domestic prices during the emergency is perhaps understandable,” UBS analysts wrote in a note.

Russia consumes an estimated 75 million tons of grain a year, but thanks to bumper harvests the previous two years, imports are unlikely. The government has said it’ll only dip into reserves when necessary.

And while the export ban could cost $1.5 billion to $2 billion in revenues from abroad, Russian consumers are expected to buy up agricultural produce.

“Most of the grain that won’t be transferred out of Russia will be sold on the domestic market,” said Nikitin.

Although the government’s purse may lose some lining from tariffs, agriculture only represents 3 per cent of its exports. Renaissance Capital says the ban is equivalent to an average annual increase in the oil price by $1.6 a barrel, while Urals blend has jumped $10 between the beginning of July and the start of August.

Some firms have also benefitted from the grain ban. Russian firms tied to long-term export contracts from earlier in the year have been able to get out of selling at the lower price due to the force majeure measures.

Aviation firms, despite seeing delays caused by the thick smoke above Moscow, could also benefit.

A record number of passengers joined the exodus out of the capital according to Rosaviatsia, the Federal Air Transport Agency.

First published in the Moscow News