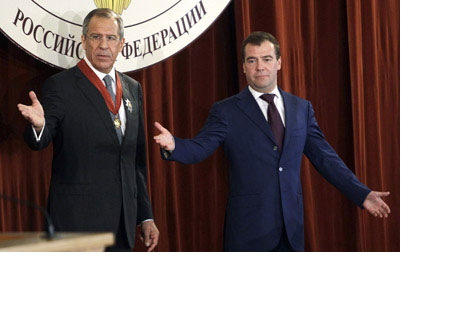 In a dramatic move, Russian President Dmitry Medvedev has pushed the ongoing modernisation drive at the heart of the Russian foreign policy and asked diplomats to shed stereotypes and equip themselves with new skills that are critical to the country’s future prosperity.

“What we need, and I have spoken about this before, are special modernisation alliances with our main international partners,” Medvedev said mid July at the biannual meeting with Russia’s ambassadors at the Foreign Ministry in Moscow.

He asked them to concentrate on three major goals: promoting economic and industrial modernisation to build an innovative economy; bolstering Russia's democracy and civil society; and boosting international cooperation in the fight against organised crime and terror.

Stressing on the importance of the Asia-Pacific region and ties with the ex-Soviet republics, comprising the Commonwealth of Independent States (CIS), he underscored the need to firm up strategic partnership with China, to further develop cooperation with India, to reinforce ties with Japan and other countries, including the ASEAN states.

Investment from the Asia Pacific region, he said, is important to living standards in the Russian Far East and East Siberia, both of which border China. But the president’s remarks also included a note of caution.

“At the same time, Russia’s policy in the Asia-Pacific should continue to be aimed at ensuring the safety of our eastern borders and promoting peace and stability in the region,” said Medvedev.

Shaking the complacency of diplomats, the Internet-savvy president exhorted them to hone their expertise in non-traditional areas such as biomedicine and aerospace. He asked them to proactively engage with non-government organisations and experts in other countries and inject more timelines and rigour into their diplomatic notes back home.

With the economy partially recovering from the recession, Medevedev puts economic diplomacy in the forefront and asked his diplomats to promote new investments and strengthen multilateral contacts, specially within the BRIC grouping, the club of emerging powers including India, Brazil, Russia and China.

“The role of the Russian missions abroad should not be limited to a trivial race after the number and volume of messages sent to the center,” said Medvedev. “First, it is essential to take a deep analytical approach to forecasting development trends, both in bilateral and multilateral relations.”

“What we need here is a fresh perspective. That is why I said that we sometimes need to find the strength to renounce stereotypes, even if they are learned at the Moscow State Institute of International Relations,” Medvedev said.

Medvedev, who is at home in new social media, reminded the diplomatic corps that “anyone who has access to modern communication technology can keep abreast of current affairs and it’s not necessary to receive coded messages. In other words, one must live and act in an online mode”.

Medvedev cited his recent visit to Silicon Valley in California as an example of the kind of new engagement he is encouraging in Russian foreign policy. “Cooperation in the innovations sector can be substantive, rather than something to adorn a summit or just an idle idea,” he said. “It can contribute to the positive agenda in our relations with the US and expand the potential in our future cooperation, which should not be limited to cutting down on missiles or sparring over various regional conflicts.”

Kommersant, a Russian newspaper, hailed the speech as “revolutionary” and said it struck a quite different tone than his speech two years ago. “Not a word was said about Russia having got stronger and being a force to be reckoned with in the world,” wrote Kommersant. “Much was said about the need to change the country and to change ourselves.”

Although Medvedev warned that democracy cannot be imposed unilaterally from the outside, he said, “It is in the interests of the Russian democracy for as many nations as possible to follow democratic standards in their domestic policy.”

The speech was followed by a closed session where Medvedev was reportedly even sharper in emphasising the need for the diplomatic corps to get behind the twin goals of modernisation and democratisation. "We are facing more serious tasks and they will require mobilisation. This was a useful conversation and one that was rich in content,” Konstantin Kosachev, the head of the Foreign Affairs Committee in the Duma, the lower house of parliament, told Kommersant.

Medvedev’s modernisation mantra has, however, attracted its share of critics. “Moscow’s modernisation scenario implies selective cooperation in the areas in which Moscow is interested, rather than full-scale integration with the West,” writes Fyodor Lukyanov, editor-in-chief of ‘Russia in Global Affairs’.