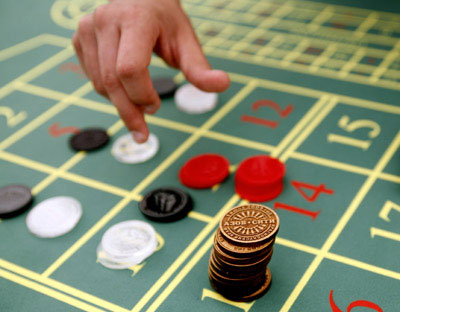 Kevin O'Flynn travels to the special gambling zone in the remote Azov Coast and finds that Las Vegas dreams will take some time to realise.
It takes a bumpy, three-hour drive along crumbling roads to travel from the nearest city to Azov City, this lonely outpost in the middle of a barren field. Visitors walk across wooden planks laid down over dug-up earth, as fluorescent-lit palm trees glimmer nearby. The building, squat and ugly, is festooned with blazing lights. Two stray dogs curl up by the entrance, hiding from the howling wind that sweeps in from the nearby Azov Sea.

Yury Pozharov is the director of the Oracle, the first legal gaming site built since a Russian gambling ban last year restricted casinos and slot machines to four special zones in far-flung locations. He says since it opened in February, the Oracle draws between 150 and 400 people a day, both locals and out-of-towners. "There are slot machines, roulette and cards. The locals mainly play the slot machines," Pozharov says. "Roulette and cards have different stakes and the people who play those are the ones who come from Krasnodar and Rostov-na-Donu."

Game for a game?

Russian gamblers last year were shocked to hear of a ban on gambling, which also deprived thousands of casino workers of jobs and threatened to drain around $1 bn in tax revenues. It also abruptly ended a culture of entertainment and excess embraced by the country's oligarchs and high-rollers. Illegal gambling, however, continues to flourish in some cities.

Prime Minister Vladimir Putin first proposed the step while the president said the ban was a moral imperative that would save families of modest means from losing their last kopecks. Instead, the Kremlin designated legal gambling zones in the Far East, Kaliningrad, Siberia's Altai Krai and the Azov Sea coast. The plan, it was hoped, would funnel new income into economically sluggish regions while keeping the bulk of Russia vice-free.

Nearly a year later, foreign and Russian investors remain skeptical. Azov City, near the mouth of the River Don in southern Russia, is the only zone to have successfully launched a casino. And Oracle, which is run by a Kazan-based investment group, Royal Time, has yet to capture the glamour of shuttered gambling legends like Moscow's Metelitsa or St. Petersburg's Taleon Club.

Royal Time says a second casino is expected to open by summer and a third by year's end, with hotels and an aquapark to follow. Casino entrepreneurs say the Azov City complex may draw in as many as 25 mn tourists a year. Locals are, however, cautiously optimistic. Lyudmila, who lives in the neighboring village of Molchanovka, says her home would still be without heat if it weren't for the Oracle. "For us, of course, it's good," says Lyudmila who has opened a small store for casino employees and gamblers. "They gave us gas, electricity and water. We have gas heating now, so of course, it's good for us.” Other Molchanovka residents are looking forward to other amenities in the town.

Luring in the customers

Perhaps the greatest challenge facing the Oracle is its remote location. The two nearest cities, Rostov-na-Donu and Krasnodar, are hours away by road and the conditions of roads leading to Azov City can be treacherous. The casino has tried to sweeten the deal by offering free minibus service to and from nearby cities, but it hasn't worked.

For diehard gamblers like David Semelnikov, a 26-year-old fitter from Rostov-na-Donu, nothing can come in the way. On his fourth trip to the Oracle in a week, he has already made 5,000 rubles ($165) on the slot machines and has winnowed the trip down to a relatively speedy 2 1/2 hours. "They've banned it in the city, taken them all away and made a special entertainment center, where you can calmly, legally play," Semelnikov says. "It's the first legal club. So we've come from Rostov to try our luck."

Andrei, a local taxi driver, is among those who has seen his fortunes improve. But after losing several thousand rubles on the slot machines - and watching other poor people fall into despair after losing even more - Andrei says he has personally lost his taste for gambling.