Znamenskoe-Raek: the faded glory of the Russian country estate 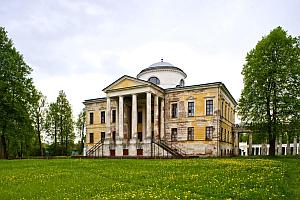 The Russian countryside was once dotted with estate houses that belonged to the gentry and to prosperous merchants. Most of these houses were built of wood, modest in size and appearance such as the family estates of the great poet Alexander Pushkin at Boldino and Mikhailovskoe. Others, such as Leo Tolstoy's house at Yasnaya polyana, were more imposing. And a few of these houses reached palatial proportions. The upheavals of the 20th century dealt harshly with these relics of a bygone social order. Only a few of them have survived in recognizable form.

Fortunately, one of the grandest is still standing at the village of Raek (Ra-YOK), to the south of Torzhok not far from the Moscow - St. Petersburg highway.The estate, formally known as Znamenskoe-Raek, includes a landscaped park extending to the small Logovezh River. Near the main house is the Church of the Icon of the Sign (Znamenie; built in1766), from which the village draws the name “Znamenskoe”. Although some of the park pavilions were damaged or destroyed during the Second World War, the main house and its attached buildings are structurally intact. Between 1787 and the 1790s the estate was the scene of intensive construction. Its patron, General and Senator Fedor Glebov, intended to create an idyllic retreat for receiving important guests. The estate’s location near the highway facilitated this function, and Glebov gave the prominent architect Nikolai Lvov full rein for a grand mansion in the Italian style.

Lvov — like the other major Palladian architects in Russia, Giacomo Quarenghi and Charles Cameron — was interested primarily in Palladio's "rural" architecture, and above all the villas. At Raek the Italian style is particularly evident in the rotunda that rises above the two-story mansion. On the interior the rotunda provides natural light for the ball room at the center of the second (main) floor. All flanking rooms are subordinate to this square central space — a clear indication of the house's purpose as a center of reception and entertainment.

The most distinctive feature of Lvov’s design is a grand colonnade that encloses the cour d'honneur in front of the house. It is flanked on either side with pavilions and service buildings that are closely integrated into the colonnade. The center of the colonnade opposite the mansion is a monumental entrance arch. There is nothing else quite like it in Russia, yet in some respects this extraordinary entrance court reminds of Thomas Jefferson's design for the colonnaded lawn at the University of Virginia.  At Znamenskoe-Raek, Lvov created a distinctive approach for the adaptation of the natural setting to the architectural forms of the neoclassical manor and its auxiliary buildings. At this time the concept of landscape design centered on the contemplation of "unfettered" nature, whose eternal laws were supposed to complement the natural logic and meaning of neoclassical architecture. Lvov's grand colonnade facilitates that union by providing forest vistas through the classical entrance arch and the colonnade itself, a rare achievement through which artifice and nature are both delineated and at the same time fused.

The Znamenskoe-Raek estate, whose survival is little short of miraculous, is undergoing a careful restoration and is open to visitors. It should be visited by anyone with an interest in the former glory of Russia’s estate culture.