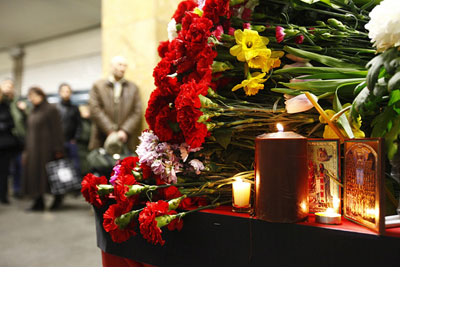 The economic damage caused by the forest fires in July-August in Russia is tentatively estimated at $15 billion, or about 1% of GDP. In general, natural disasters, which entail untold human suffering, put the economic and political system of the victim country, or, as they like to say in India, “the political economy of society,” to a severe test.

When the elements strike, a temporary paralysis of power is all too common: think of the bewildered George Bush Jr. in New Orleans or the distraught Vladimir Putin visiting burned villages in Central Russia. More important is the prompt and competent reaction of the ruling class to natural disasters, the ability to act in concert and reverse the processes that threaten society and thus reassure people and restore their confidence in the future. In light of the above, the events in July-August 2010 provide rich food for political reflection.

Ever the populist LDPR leader Vladimir Zhirinovsky hastened to distance himself from the establishment, of which he himself is a part. As a rule, such an “aberration” does not pass unnoticed in society. This was succinctly expressed by the Indian commentator Tarun Vijay, who in a recent issue of the Times of India (August 8, 2010) castigated the ruling National Congress party for being slow in coming to the rescue of flood victims: “Should the political parties declare that unless a particular region votes for them they won’t be concerned about the population’s welfare, pain and anguish?” The problem of political parties organizing disaster relief merits special attention. In Russia, one gets the impression that political parties have stepped aside as if to leave it to the government to take care of citizens. The situation is strongly reminiscent of India in the early 1970s when the National Congress relied entirely on Prime Minister Indira Gandhi, as if hiding behind the leader’s skirts. Subsequently the National Congress lived through many crises and eventually lost its monopoly on power.

The dedication of the firemen, soldiers and volunteers could not obscure the obvious shortage of fire-fighting equipment and the fact that the country’s industrial and transport infrastructure were woefully inadequate to the task of controlling increasingly frequent natural disasters. The troubled summer of 2010 attests to the failure of the policy of import replacement, including its main areas.

The tragic events of July and August exposed flaws in the “vertical power structure”: it has not escaped public notice that some important appointments in the regions are made on the basis of personal loyalty rather than professional (“meritocratic”, to use Indian terminology) qualities. President Medvedev’s dark hint that “a post mortem” review of the situation would take place amounts to an admission that the political and administrative elite is not sufficiently effective. It would help if the rambling discussions on institutionalizing Russia’s “rational bureaucracy” were backed by concrete actions, especially since one can fall back on global experience, including that of India. The “trial by fire” has shown that this country urgently needs a “development bureaucracy” capable of supporting the management process and at the same time finding imaginative solutions to the complex problems of today and tomorrow.

The summer has not only tested the competence of various segments of the Russian elite, but inevitably raised the issue of the relationship between spontaneous and conscious elements in Russia’s development. I for one could not help comparing Russia with the way life is organized in Holland, “a model capitalist country”, according to Marx. Indeed, who can protect a country three quarters of which is at or below sea level from floods and other natural misfortunes? Who if not the state is the main strategic investor in society’s physical security?

People must know that the state will take care of them and their safety: this has been the keynote of the Russian leaders’ speeches during the summer crisis. Hopefully, the state’s responsibility will address the long overdue issue of modernizing the model of the country’s development. Russia’s tranquility and prosperity ultimately hinge on this.