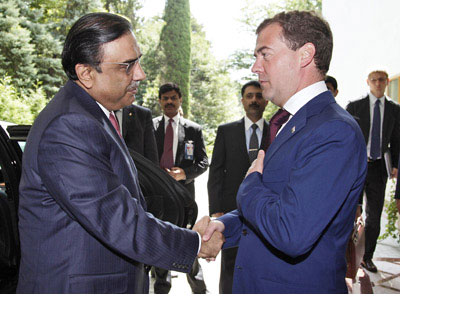 Yesterday’s meeting between President Dmitry Medvedev of Russia and President Asif Ali Zardari of Pakistan in Sochi, where a summit of presidents from Russia, Afghanistan, Pakistan and Tajikistan was held on Aug.18, was momentous in more ways than one.

YThe two leaders effectively declared they were ready to overcome the negative inertia that has dominated relations between the two countries for the past 60 years. The remaining question, however, is whether the declared good intentions can be put into practice.

There are many factors that have complicated relations between Russia and Pakistan. From the time of Pakistani independence, Islamabad has followed a pro-Western course. Since the early 1960s, Pakistan was seen as China’s key ally in the region. For its part, the Soviet Union designed its South Asia policy taking into account the interest of its main geo-strategic ally, India. Soviet-Pakistani relations hit a low point in the 1980s when Pakistan actively supported the mujahedeen in Afghanistan. Later, Pakistan was one of only three countries (along with Saudi Arabia and the United Arab Emirates) that recognized the Taliban regime in Afghanistan. The decision sealed Islamabad’s image as a country that aided and abetted international terrorism.

Russian-Pakistani relations were also shadowed by Russia’s support for India’s position on Kashmir. During an official visit to India in 1993, then-Russian President Boris Yeltsin stated Russia’s support and later he said: “Russia will not sell Pakistan a single bullet.” With the example of Chechnya in mind, Russia saw Kashmir exclusively through the prism of preserving India’s territorial integrity.

India has also long been a key Russian partner in military-technical cooperation. Delhi sees the increase of economic ties between Russia and Pakistan as a threat and Russia does not want to risk its billion-dollar contracts with India for materiel considering that Russian-Pakistani trade today stands at a mere half-billion dollars a year.

But despite this history, now the two countries’ leaders seem to be ready for a clean slate. Dmitry Medvedev invited Asif Ali Zardari to come to Moscow on an official visit. The Pakistani president reciprocated by inviting Medvedev to Islamabad. As presidential aide Sergei Prikhodko said on the eve of the two leaders’ meeting, “We are interested in having a full-scale visit to Russia by the president of Pakistan.”

It is symbolic that the meeting of the two presidents took place on the day that marked the second anniversary of the resignation of Pakistan’s previous president, Pervez Musharraf. The selection of this date for the meeting may indicate that the two countries will build their relations in a new way without looking back over their shoulders at the past.

But Russia’s relationship with India remains a concern. Konstantin Makiyenko, deputy head of the Center for Analysis of Strategies and Technologies, said: “We still have to look back at India over our shoulders. India’s share in the portfolio of arms orders is at least 50 percent.” At the same time, cooperation with Pakistan has recently begun to develop as well. Russia sells Islamabad Mi-17 helicopters and RD-93 engines for FC-1 Chinese-Pakistani fighter planes. India expressed displeasure over the deal, but shipments nevertheless went ahead. Even so, “Pakistan will never take India’s place in Moscow’s heart,” Makiyenko said.

Pyotr Topychkanov, a senior research fellow with the International Security Centre at the RAS Institute of World Economy and International Relations, noted that progress in relations between Moscow and Islamabad is mainly confined to the security sphere. A project to have Russian Oka cars produced in Pakistan, which was vigorously promoted by Pakistan in the early 2000s, never got off the ground and in the end, the Chinese have occupied the cheap small car production niche in Pakistan. Pakistan’s main interest is not in cars, but in KAMAZ trucks. But KAMAZ already has production in India.

Topychkanov also stressed that Dmitry Medvedev has not yet decided whether to visit Pakistan: “Pervez Musharraf sent a similar invitation to Vladimir Putin in 2003, but the visit did not take place for security reasons.”

Russia is unlikely to play an important role in the settlement of the long-simmering conflicts in South Asia, although Pakistan is suggesting that Russia could act as a broker in the settlement of the Kashmir issue—mainly to take advantage of Moscow’s good relations with Delhi. But India has always said that Kashmir is a bilateral problem that does not call for international interference. This was effectively admitted by Prikhodko, who said: “Traditionally we assist in the establishment of direct contacts between these states.”

“Russia tries to act as a broker, but it has no real resources to do so, which means that all the talk on this theme is intended for internal consumption,” said Topychkanov. He recalled an episode from recent history in which Vladimir Putin, at a 2002 summit in Almaty, Kazakhstan, tried to act as an intermediary between Pakistan’s Pervez Musharraf and Indian Prime Minister Atal Bihari Vajpayee, but the two leaders refused even to shake hands. The Indian delegation was not invited to yesterday’s meeting in Sochi.

Russian President Dmitry Medvedev and Pakistan's President Asif Ali Zardari held a meeting on Wednesday, and agreed that the countries need to develop economic and security cooperation. Zardari expressed his condolences for the 50 lives lost in the wildfires across Russia, caused by the unprecedented heatwave.