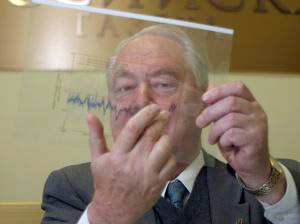 The climate has gone berserk: It has smothered Russia with unprecedented heat, blown unprecedented cold toward South America and unleashed powerful floods in Asia. The cause of all these calamities seems to be obvious: global warming. We sought the opinion of Yuri Izrael, one of the most authoritative scientists studying the issue, director of the Global Climate and Ecology Institute and member of the Russian Academy of Sciences.

I would like to stress right off that the anomalously warm periods are features of weather, and on no account of climate. The weather may change almost every day, but climate remains stable for a very long time. As for record temperatures, they are by no means rare. A record is set for a single day and there are 365 days in a year, which is why hardly a year passes without some kind of temperature record. It is probably wrong to say that the current temperature anomaly is a sign of climate change. These are different things.

There are about 10 scenarios of how the climate could change. Under the optimistic scenario, the temperature will rise by 1.5 degrees Celsius over the next hundred years, while under the worst case scenario, it will rise by 4.5 degrees, triggering the melting of ice in the Antarctic, especially its western part, and in Greenland. Unless measures are taken, the consequences for many coastal areas on Earth could be catastrophic.

But the melting process will last not tens of years, as “climate scaremongers” claim, but thousands of years. I think that between now and then man will find a way to stop the warming. It is important to understand that all these are hypothetical scenarios and the chances that they will be realized may be negligible.

It is wrong to over-emphasize the situation and paint lurid pictures of humanity’s future.

On the Kyoto Protocol

There has never been a consensus that man is to blame for global warming among the experts at the Intergovernmental Panel on Climate Change. I was among the fiercest opponents and have challenged that document because it is not scientifically valid. The UN Framework Climate Change Convention says that the concentration of greenhouse gases must be such as to rule out the danger of anthropogenic impact on the climate. But where is that level? Nobody knows, hence it can be fixed arbitrarily.

World leaders agreed in Copenhagen to use as a reference point the level of temperature in 1900, the pre-industrial era, and to do everything not to exceed this level by more than two degrees. This amounts to an admission, even if only implicit, that man is the cause of warming. But there were periods in the history of the Earth when man did not exist and the temperature exceeded current temperatures by 10-12 degrees and the greenhouse concentration was 10-15 times higher.

Over the centuries, temperature on the planet has waxed and waned for reasons that are not yet fully understood. Let us take for example the last 100 years. The average temperature on the planet decreased between 1900 and 1910, but increased by nearly one degree by the 1940s in spite of the wars when industry was in low gear and greenhouse emissions were comparatively low. How does one account for such a growth in temperature? Those who insist that there is global warming have no answer. Then the temperature began to decline even as industry recovered and factories were restarted. The drop in temperature continued until 1975 before sharp growth set in, which continues to this day.

In this situation of uncertainty as to why climate is changing, it appears the Kyoto Protocol is costing trillions of dollars. That is the amount one has to spend to stop the increase of greenhouse gas emissions. Yet even if such astronomical sums are spent, success is by no means assured.

The Academy held a scientific seminar on the climate problem chaired by the president of the Russian Academy of Sciences (RAS). During the seminar, some of the country’s leading scientists declared that the Kyoto Protocol is not scientifically valid. Consequently, this is not just my personal opinion, but the opinion of leading Russian scientists. It is shared by the President of the RAS, Yuri Osipov. In 2004, he sent a letter to the country’s leaders saying that Russian scientists were against the Kyoto Protocol. Why has Russia ratified it? I think this is all about politics.

On the future cooling

Many scientists say that the climate will become colder and not warmer and that the planet is entering another cycle of cold. This theory is based on geological data collected over thousands of years. There is no direct proof that cooling is going to happen, but there is some indirect evidence. For example, 10,000 years ago the icing cycle ended and the warming phase set in. The maximum average temperatures were reached 5,500 years ago, and since then temperature has declined. There have been temperature leaps, but the overall trend has been downward. On that basis, scientists predict a cold age and dismiss the current warming as another temperature spike.

The data on greenhouse concentrations are very interesting. If their concentration reaches about 180-200 molecules per million molecules of air, the ice age on the earth will set in. In 1900, the figure was 280 molecules, today it is 380. For the sake of comparison, when the temperature on the planet was 10-12 degrees higher than today, that figure was 4,000-6,000 molecules. In other words, we are closer to the ice age but we are drifting away from that boundary. True, it has to be kept in mind that cycles last thousands of years and if the geologists are right, the ice age will occur in the distant future while a sharp temperature rise is already happening.

On the whole, I can say that science has no clear idea of how and why climate changes, there are many imponderables, which preclude any hard and fast conclusions. The chances to be wrong are too great.

Just how unique is the current weather anomaly for Russia? In their book “A Thousand Year Chronicle of Unusual Natural Phenomena,” Borisenkov and Pasetsky, drawing on Russian chronicles and those of other countries, on data from the study of Greenland ice and the width of the annual tree trunk rings registered climate fluctuations over several millennia. For example, the warmest period in Europe was between 1150 and 1300, when the climate was hotter than it is today, meteorologists point out. Even in Greenland the temperature reached 9 degrees in July-August. Tall trees and grass grew there and fish and animals abounded.

This was also a favorable period for Russia, but later the climate developed out of sync. While between 900 and 1300, one or two droughts occurred every hundred years, in the 14th and 15th centuries there were 11-12 droughts and 8-13 floods in each century.

Chroniclers recorded 12 “great heat waves” in the 14th century, eight of which swept the whole of Rus. Many cities were burned, epidemics and epizootics flared up and many thought that this was the end of the world. An unusual heat struck Rus in 1364, and in 1368 “it was dark for three months.” It was so hot that “fish died in the rivers.”

Three years later there was another heat wave and there were fires when people could not see each other “at a distance of one fathom.” Throughout the summer “there was not a drop of rain from above.”

In the late 1500s, heat was replaced with cold and the average temperature dropped by 1.5-2 degrees. The period has been called the “minor ice age.” It came to the Russian plain in about 1560 with the cold peaking in 1645-1675. Warming resumed since 1900 and has continued to this day.


What should we get ready for? Russian climate forecast for the 21st century

The Voyeikov Main Geophysical Observatory of the Russian Weather Service, headed by Vladimir Kattsov, a frequent contributor to Rossiiskaya Gazeta, has prepared a report on climate change in Russia in the 21st century. What does the future hold in store for us?

To put it in a nutshell, the climate will be more “jittery,” to use Vladimir Kattsov’s word. What will be the manifestations? Various temperature anomalies and extreme phenomena will become more frequent, the number of hurricanes, floods, avalanches, rivers bursting their banks and droughts will increase.

Russia is vast and climate change will affect its different parts in various ways. In some parts it will be welcome and in other parts it will be harmful. For example, water is a vital issue. On much of the territory – in the north and northwest, in the Volga, Non-Black Soil, the Urals areas and in most of Siberia, the amount of water will increase, while in the Belgorod and Kursk Regions, the Stavropol and Krasnodar Regions and Kalmykia will see a serious decline in the amount of water. In general in most regions, water will become a key problem.

In agriculture, everything will depend on the amount of rainfall and droughts. On the whole, grain crops are expected to drop by 10-13 percent in the Black Soil area, by 25 percent in Southern Siberia while they will grow by 10-20 percent in the Non-Black Soil area. If warming continues, the boundaries of warm-climate crops will move north and the areas under these crops (beetroot, soybeans, sunflowers, etc.) will increase. In some southern regions, subtropical farming will become possible. At the same time agricultural pests, especially locusts, will become more of a problem.

One key climatic plus for Russia is the northward shift of the area that is suitable for human habitation. The southern boundary of extreme discomfort close to the boundary of the Far North will move 60 km in the area of Komi, Arkhangelsk, 150 km in Khanty-Mansiisk and Evenkia, 250 km in the Republic of Sakha, the Irkutsk and Khabarovsk Regions. The weather in the country’s centre and south will grow hotter. Obviously, temperature swings will happen more frequently, harming people’s health. High temperature, among other things, contributes to the spread of infectious and parasite-caused diseases. By the mid-century the permafrost zone, which occupies about 60 percent of our country’s territory, will move north by as much as 200 km in Western Siberia. This will have a negative impact on the numerous pipelines that deliver oil and gas from Siberia to Europe, and on buildings. Some experts believe that an increase of the average annual temperature by 2 degrees diminishes the strength of foundations on piles by as much as 30 percent.

More than a quarter of the houses built in Yakutsk, Vorkuta and Tiksi in 1950-1970 may be destroyed. In Norilsk in the last 20 years, the surface has been melting a whole meter deeper during the warm period, which has already caused foundations to sag. What will happen if global warming hits the area with full force? There will be more precipitation on Russian territory, it will increase by an average 10% between 2000 and 2050. The biggest growth will happen in winter, especially in the Eastern and Northern regions. By contrast, in most of the European Russia, in the south and southwest, there will be less precipitation.

Further warming will push the vegetation zone to the north. In European Russia, the forest zone will expand northward, while in Siberia the forest area may shrink while forest diversity may increase. By the late 21st century, there will be more droughts in the forest-steppe, steppe and semi-desert belts. The steppes in the Krasnodar and Rostov Regions will become drier.

The authors of the report stress that one should prepare in advance for the changes that climate may spring on us.