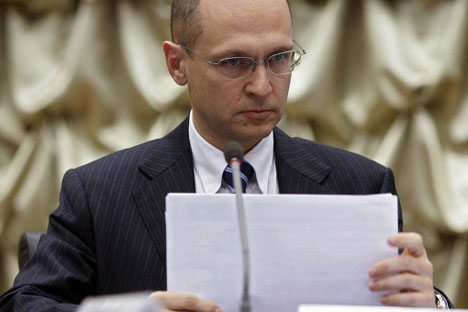 India hopes Russia will go ahead with the construction of a nuclear power plant at Haripur in eastern India, despite Russia's concerns over ongoing local protests, the Times of India newspaper reported on Tuesday.
"The Russians are concerned about the situation but we have told them that we are still hopeful about it," a senior government official said.
Russia is worried that protests over the construction of the plant are becoming too political. A local opposition party has recently joined fishermen in protests against a possible rise in the temperature of seawater in the Bay of Bengal.
The concerns have forced the Russian Federal Atomic Energy Agency, Rosatom, to ask the Department of Atomic Energy of India (DAE) to consider another site for the plant.
The construction of the plant was given environmental clearance in January.
Rosatom head Sergei Kiriyenko said previously that a total of 12 reactors were to be built at Haripur and a second site, Kudankulam, in eastern India. A third site would be allotted soon, Kiriyenko said, bringing the total number of reactors to 16.
Atomstroyexport, Russia's nuclear power equipment and service export monopoly, has been building two reactors for the plant since 2002 in line with a 1988 deal between India and the Soviet Union and an addendum signed 10 years later.