For the first time, the economy gets real 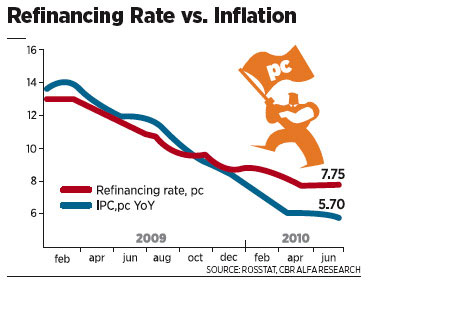 It took 20 years and more than one crisis, but the Russians are getting interested in saving again. This will fuel Russia's cash-poor economy.

Since the introduction of a market system, interest rates in Russia have been below the rate of inflation. In other words, the country has suffered from negative real interest rates for the past 20 years. However, they turned positive last month (beating inflation), and this has huge implications for what is now a genuine economy.

“The changes will be profound, but not dramatic,” said Peter Westin, chief economist at Aton investment bank in Moscow. “We’re talking about less than 1 percent, so no one is going to get rich on the spread, but the motivations have completely changed.”

The turnaround is the silver lining of the global economic crisis for Russia: The sharp drop in demand it provoked stopped inflation in its tracks. The government now predicts a modest (for Russia) 6 percent inflation rate by the end of the year, which is comfortably below the Central Bank of Russia’s (CBR) current overnight rate of 7.75 percent, despite this benchmark having been slashed around a dozen times over the last 18 months in a bid to boost growth.

What does that mean for the average person? Russians, whose deep distrust of banks stemming from the 1998 crisis has been slowly easing, have the motivation to deposit their money in a bank. This could make a huge difference to the funding of the country's financial houses. “The banks are building up bigger and bigger supplies of capital, and so getting stronger each day,” Westin said. “We’re still early in the cycle for every ruble a bank takes in as a deposit it only lends out 50 kopeks [cents]; they’re still very nervous, but it’s only a matter of time before they feel confident enough to start financing growth again.”

The appearance of normal rates of return should produce a raft of specific benefits for the economy. “Negative rates are like having a leak in the petrol tank of your car. No matter what you do, eventually you run out of gas and stop,” Westin said. “The arrival of positive rates means that gas (money) is now accumulating in the tank, and the car can start traveling faster and faster.”

For a start, banks will be able to manage their cash better, dividing it among equities, bonds and cash, which will make the financial system more robust. At the same time, lower rates are already feeding through to the nascent mortgage market, and growing house sales are having a domino effect on the crucial construction sector. Real interest rates will also allow bonds to continue to mature, and so make it easier to draw up long-term investment plans, a much-needed element to protect the economy against the caprices of international markets.

Finally, and most significantly, real interest rates mean that the CBR’s overnight rate will now actually have weight, and will therefore allow the central bank to control both inflation and the strength of the ruble. However, the CBR still needs to bulk up the financial system with more cash, and introduce more flexibility to the exchange rate, economists say.

Over the last year, the CBR has been in transition regarding its control of the economy, concentrating on adjusting interest rates rather than simply buying up dollars. However, the supply of money in the Russian economy remains less than half of that generally found in the West. “You need a very liquid monetary base and, in particular, a big and liquid bond market before you can really use interest rates as a tool to encourage people to save or invest,” Westin added.

The good news is that the bond market is deepening. Private companies have been issuing a flood of paper, as that is currently the only realistic route to bank lending. The state also plans to issue domestic bonds of $38.9 billion to finance the budget deficit this year.

The fly in the ointment is the catastrophic heat wave, which has devastated the grain harvest. “The upshot is this could drive up inflation,” warned Chris Weafer, head of strategy at Uralsib in Moscow. “It’s already making bond investors nervous, and the state could be forced to start raising interest rates before the end of the year.”

Finally, an interest rate that is above inflation.