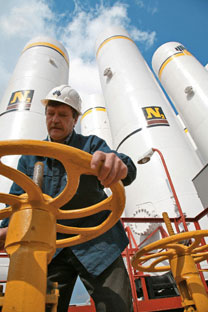 The country may be a world leader in natural resource deposits, but it is also leading the stakes in energy inefficiency.
Russia uses roughly twice the energy that China uses, and six times what the United States does, to produce the same value of goods, according to a survey by the US-based McKinsey consultancy.

Yet if Russia lives up to the promise to invest in energy-saving technologies, it could save up to 150 billion euros in the next 20 years, McKinsey claims.
And President Dmitry Medvedev has been directing his energy towards reducing inefficiencies. A landmark law on energy efficiency was passed in November, outlining the government’s strategy to encourage energy-saving over the next decade and setting a goal of slashing wastefulness by 40 per cent by 2020.

But ecologists still claim that government and businesses are throwing away their advice in favour of immediate profits.
Carbon-credit potential: the gas refining centre at the Komi Republic’s Usinsk oil field. “We can’t speak about sustainable business since eco-friendliness is a ‘barrier’ for business and not an advantage,” said Yevgeny Shvartz, head of nature protection at WWF Russia. “Today even big companies like Norilsk Nickel are still trying to lobby for their anti-nature interests and postpone the Euro-4 ecology standard.”

Russia’s energy giants, however, claim they are doing their bit to reduce wastage.

Gazprom Neft has teamed up with Sberbank and Japan’s Mitsubishi to utilise gas that was previously flared at the Ety-Purovskoye field to get 3.1 million Emissions Reduction Units – a form of carbon credits.

Russia and Japan’s approval for the deal could unlock another 15 clean energy projects to be launched under the Kyoto Protocol. Red tape, however, has been holding up a further 100 projects that could generate around $3.6 billion in carbon credits.

Prime Minister Vladimir Putin flagged up the issue last year, warning that domestic oil and gas majors face heavy fines if they fail to curb gas wastage.
Major oil producers such as Rosneft, Lukoil and TNK-BP are investing hundreds of millions of dollars to meet the government’s target of increasing associated gas utilisation to 95 percent by 2012.

While the government has given the green light to the oil majors’ projects, small-scale sustainable businesses claim little thought is given to them.

Ensat, a Moscow-based company that produces energy-saving and cleaning technologies, says there is still very little understanding among business leaders on why they should save energy.

“The economic crisis has shown Russian business and government that there is a real necessity to save energy, even in a country selling oil,” said Sergei Tishkin, the founder and owner of Ensat. “They looked at their growth targets and realised the only way to get to [them] was by increasing efficiency.”

And the government has yet to sort out the legislation for sustainable development construction companies, even though the rest of the world is focusing on building an eco-friendly future.

“Green technologies can be more than a PR stunt and a chance to draw international investors – they also work in terms of economy and can save you money from the very outset of construction,” said Pavel Goncharov, head of the Guild of Managers and Developers, which is organising Russia’s first Green Awards International ceremony for real estate firms this year.

An office centre on Obvodnoi Canal in St. Petersburg became one of the first buildings in Russia to receive an International Leadership in Energy and Environmental Design certificate. It will save 47 per cent of the average costs on energy, water and heating, its developers say.

“The energy-saving design – which uses both conventional and solar energy, a combination of heating power to run lifts in the building [and] a reduction of water usage – will help the tenants to save dramatically on utility bills, which will only rise from now on,” said Charles Cresser, associate director of project and development services at Jones Lang LaSalle.

Meanwhile billionaire Mikhail Prokhorov is trying to take Russia’s car industry on a ride to the future. The oligarch owner of Onexim announced plans to invest 100 million euros in electric cars at a new factory in St. Petersburg.

The hybrid car will be produced by Yarovit motors, and an online competition for the best name has been launched. The winner will get the first 8,800-euro car free when mass production starts in 2012.

But the tycoon faces competition from other local producers who have clubbed together to jump-start the race for the first competitive eco-car.

In July automakers Sollers, UAZ, SsangYong and Fiat along with Kompomash, a producer of space and aviation machinery, unveiled Russia’s first electric vehicle, the Ecobus.
Similar to the Fiat Ducato, it has two 40 kilowatt engines providing 109 horsepower and can last 180 kilometres before needing a recharge.

“Looking at the American car industry, it is clear that GM, Chrysler and Ford, which are eagerly seeking to prolong the life of their high-fuel consuming engines, are half-bankrupt – but Japanese hybrid engines have a good future,” said Shvartz.

Even the much-maligned Avtovaz is getting into the business of green, after 25 per cent shareholder Renault announced it is seeking to invest in electric car production in Russia.

Russian Railways have also fast-tracked plans for sustainable development. Vice-president Valentin Gapanovitch announced that the state-owned company will build “intelligent” stations in Murmansk, Anapa and Adler, according to a RIA Novosti report.

The project, featuring nanotechnologies, sea and solar energy, will be carried out together with innovation companies Rosnano and Renova and will cost about 50 million euros, which will probably be financed by the European Bank of Reconstruction and Development.

The Azbuka Vkusa chain is one of several displaying a good selection of organic foods.
According to new energy efficiency legislation that will come into force next year, manufacturers will have to label the energy performance of household appliances.
Those over 100 watts will be banned, while meters will be installed for utilities including gas, electricity, heating and water in new buildings.
Retailers are also cashing in on increasing demand for organic products and healthier food, but consumers have been slow to follow the trend.

According to a Nielsen survey 50 per cent of Russians have tried organic food, with most going to their local market to get it.
But many rarely consume it, and think words such as “eco”, “bio” or “natural” are just a gimmick to ramp up the price.
Most organic foods are sold by high-end supermarkets such as Globus Gourmet, Azbuka Vkusa and specialised organic food supermarket Grunwald, located on Rublyovka.

“Eco-food is still not very popular with customers, many of whom do not fully understand the core idea,” said Andrei Golubkov, a spokesman for Azbuka Vkusa.
“[To get recognised brands] you need to pay more for these products; and there isn’t any local organic food alternative, since there is no official certification in Russia.”