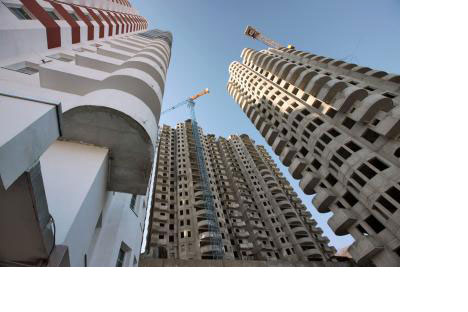 Russia’s mortgage industry remains in its nascent stages, making a new home out of reach for many people without the paperwork or cash upfront.

Victoria Sherbakova needed to move. As doctor at a private liposuction clinic in Moscow, she lived outside the city in the Moscow region and commuted every day on the train. The problem was that her three-year-old daughter Sasha was going blind, and because the family didn’t live inside the city itself the capital’s hospitals wouldn’t treat her.

“The hospitals in Moscow are the best in the country, but you have to have a Moscow city registration to be admitted,” said 36-year-old Sherbakova. “So we decided to give up our place in the region and move into the city.”

Sherbakova is a member of Russia’s emerging middle class, who are increasingly on the hunt for a new home. Born in the Belgorodskaya region, in the south of European Russia, she moved to the Moscow area several years ago to find work.

Her husband works in the same clinic, where they make $5,100 a month between them nearly four times the national average. Like many, they desired a house in Moscow's surrounding region rather than the city, as “you get more for less.” However, this also placed them under the Moscow region administration, placing them outside Moscow city status. Hence Sasha's treatment and medical services could only be provided by regional authorities.

Finding an apartment in the city was easy; raising the money to pay for it was more complicated.

Russia’s mortgage market first appeared in 2003 and grew rapidly, but the process of borrowing to buy a home remains bureaucratic, and a mortgage is still far from being a mass-market product.

The first challenge is the paper chase involved, merely to provide the basic information needed to fill in an application. Sherbakova is lucky in that her clinic is “white” and was prepared to give her documents to prove her income. Many companies operate in the grey economy and pay only a small part of their employees’ salary officially through the bank, with the rest paid in cash to avoid taxes. That means many would-be apartment buyers struggle to prove their real income.

Next, after a month searching for a mortgage lender, Sherbakova stumbled across Kreditmart, Russia’s only mortgage broker. The company was founded by James Cook, an American who pioneered the mortgage business at the start of the decade as CEO of Delta Credit, a mortgage specialist backed by U.S. government money. Kreditmart was set up to resell mortgages for the dozen commercial banks in the business and, because it gets a discount, can offer better interest rates than the banks themselves.

The demand for new housing is huge, and eight out of 10 Russians want to buy a home, according to Cook. However, the crisis hurt the mortgage business badly and it has been difficult for many homebuyers to qualify. A few years back, the mortgage market was just beginning, but booming. Most of those dozen commercial banks put their mortgage programs on ice in 2009, leaving two massive state-owned banks Sberbank and VTB Bank with some 80 percent of the business.

However, the market is now starting to pick up again. “The number of loans has gone up dramatically in the last two months,” said Cook. “We're still expecting a wobbly six months, but most people in Russia believe the worst of the crisis is behind them. Concern over Europe's sovereign debt is the wildcard that will determine what happens in the rest of the year.”

Russia’s state-owned Mortgage Agency (AIZhK) forecasts that mortgage lending will increase to $2.3 to 2.8 billion between April and June. Still, the market has some way to go to recover all the ground lost last year: the mortgage business reached a peak volume of $22 billion in 2008 (including the last quarter where almost no business was done at all). The total volume of deals expected in 2010 is around $7.3 billion.

Thanks to her job and the fact her family had built up significant savings, Sherbakova is the ideal customer for a Russian bank, and she sailed through the process relatively easily. “It all went very quickly. We got the documents from the clinic in a week and the bank loan was approved even faster,” she said.

However, even more onerous than writing the application is the huge down payment the banks demand. Sherbakova was asked for a 40-percent down payment on a $200,000 loan. “We had already saved up about half of the down payment, and because we work in the medical business we have the opportunity to make extra money on the side, so it didn’t prove a problem to raise the rest,” she explained.

Then the family hit a real snag: the owner of the apartment was willing to sell, but only wanted to register a percentage of the contract sum because of the threshold for tax breaks designed to stimulate the market.

Cook said it's a common problem, with very many sellers insisting on declaring only part of the sale to the authorities, with the rest off the books. That's because after the collapse of the Soviet Union, everyone in Russia "inherited" the apartment they lived in from the state, and nowadays most people sell their communist-era home to finance the purchase of a new one, and therefore the bulk of private real estate deals are done in cash.

The Sherbakovs of course needed the full sum on the contract. In such cases, the seller usually demands that the buyer also pay the taxes on top of the asking price. The haggling went on for several weeks, but eventually a compromise was found and the family moved into their apartment in the Zhulebino neighborhood of Moscow in June.

“The house was built in 1970 and we have a concierge and a kindergarten next door, which is perfect for Sasha,” Sherbakova said. “Of course, the apartment is only two rooms and much smaller than our old place, and my commute to work is longer; but Sasha is now getting the treatment she needs and we are happy with our new home.”

Russians are among the wealthiest people in Europe, thanks to the transfer of apartment ownership from state to occupants following the fall of the Soviet Union. While this property is worth hundreds of billions of dollars, according to some estimates, few have been able to tap into their wealth without a functioning mortgage market. The wealth is tied up in bricks and mortar they struggle to sell.

Around a dozen commercial banks were offering mortgages before the crisis hit in September 2008, but most have withdrawn since, leaving 80 percent of the business in the hands of Russia’s two biggest state-owned banks, Sberbank and VTB Bank.

Banks can typically ask for up to 40 percent of the cost of an apartment as a down payment, although in the last few months more banks are offering 80-90 percent mortgages as the market revives.