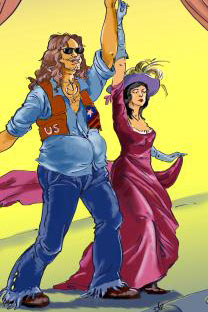 In the top floor studio of the historic Art Theater, a group of students from Wayne State University in Michigan rehearses in the thick heat. Detroit may be better known for its car industry, Motown and crime, but these students opted for the “Month in Moscow” program this summer, a series of classes, ballet lessons, physical and mental training and theater visits.

The main teaching venue holds a powerful place in theatrical history. Konstantin Stanislavsky, a life-long Muscovite, founded his famous Art Theatre (MKhAT) in 1898 and moved to Kamergersky Lane, a stones-throw from the Kremlin, at the start of the 20th century.

This is the tenth summer Wayne University has run its Month in Moscow program. The university charges applicants nearly $5,000 for a package that includes, flights, tuition, visas, insurance, theater tickets and accommodation in the MKhAT hostel and even makes scholarships available. Tatyana Khaikin, who administers the program in Moscow and acts as an interpreter for the teaching staff, said: “American students get an opportunity to work with Russian professionals and see how theater is respected and loved in this country.”

Selection procedures are rigorous; those who make it are often mature students, including a 45-year-old actor. Many of them have a particular interest in the Stanislavsky method. Carrollette Phillips, 27, says that the “the Moscow Art Theater and the work of Konstantin Stanislavsky were critical factors in the shaping of Western theater.” She said, “I never questioned if I would take the trip, only when I would take it.”

One lesson opens with the group representing an evangelical congregation. A charismatic preacher moves among them, prompting them to sing, dance and speak in tongues. The scene is compelling, by turns earnest and ironic. This improvised performance is one of the daily “surprises” the students must prepare for their professor, veteran actor and teacher, Sergei Zemtsov.

Zemtsov, dean of the Moscow Art Theater’s Acting Faculty since 1997, is exacting. The students are required to perform individual “etudes,” short scenes during which their character undergoes a psychological change. “Not bad,” he commented afterward, “but you need to believe more in your own circumstances.” He encourages the students to criticize each other’s work, and the comments, to an observer, seem brutal. The students agree that this is the most challenging but instrumental part of their course.

“Back home we don’t get enough constructive criticism,” RuthAnn Apruzzesa-Welke said. “It’s about being honest with yourself, fixing what you need to.”

The experience of living in Moscow is both enriching and challenging. As a young black woman, “born and raised in Detroit,” Phillips is struck by the homogeneity of Moscow: “There seem to be very few other races or cultures represented.” PhD student Greg Bailey said: “People don’t smile at each other here...working closely with professionals from MKhAT, the students have learned to see past the superficial differences and appreciate [Russians'] underlying warmth.”

The session continues with teamwork exercises. The students spell out a word using the whole group to form each of the letters, without being allowed to confer over which word they are actually spelling. The room hums with silent concentration and when they finally finish, Zemtsov said: “You have to focus; that took far too long.” Later the mood lightens as the students must copy a pose in turn. At the end, the first student repeats the original pose for comparison. The discrepancies are hilarious, but Zemtsov’s lesson about close attention is underlined equally clearly.

“Coming to MKhAT is … a chance to experience the teachings of Stanislavsky as they have been passed down in Russia over the past century,” Mike Butterworth said. Greg Bailey, writing a thesis about the application of Stanislavsky’s method in America, said: “It has been a life goal to come here to Russia and study acting … The way Russians talk about theater is like talking about religion, whereas Americans tend to view it more as an industry.” Phillips made a similar comparison: “I wish theater in America could be less profit-oriented and more aligned with the level of creativity I see here.”

Erman Jones, himself a professional repertory actor, was moved by the Satiricon Theater’s production of Richard III: “I was ... entertained and mesmerized by the degree of exactness and professionalism and ingenuity.” Fellow student Bailey described it as “some of the most amazing work I have seen.” He too hopes to become a theater professor and “bring some of the spiritual art of Russia to American stages.”