An Exercise in Disbelief 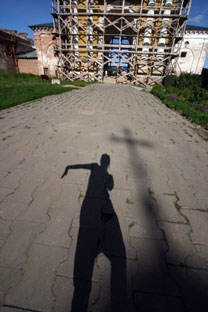 The Notion of the Russian Soul Is a Nonentity

There are many reasons to be suspicious of anyone using the phrase “Russian soul,” and not only because of the frequency with which it is trotted out by peddlers of travel books, photographs, and package cruises down the Volga river. Any term can be misapplied, abused and overused until it becomes hollow. And simply inviting one to learn about the Russian soul for just $ 250 a night with breakfast, or to observe it through arty black and white photographs of onion-domed churches, Nevsky Prospekt or wooden peasant huts, neither falsifies nor degrades the notion of the Russian soul. It is just enough to make one weary of hearing it.

But an examination of the notion quickly shows that this is a term that was hollow from the very beginning. It may have been established with the best of intentions by the best of people (and what people! The propagators of the myth are a roll call of the Golden Age of Russian letters, led by Alexander Pushkin and marshaled by Leo Tolstoy and Fyodor Dostoevsky), but in truth the Russian soul was always a cipher for something its creators neither understood nor possessed. Its excessively romantic use fits the excessively romantic frame of mind of its authors, and as a compass for understanding Russia today, yesterday or in centuries to come, it is next to useless. It is no wonder that it is joined at the hip with the adjective “mysterious”—no one knows what it means.

In less charitable moments the foreigner frustrated by the term might be tempted to dismiss the whole thing as a 19th century literary fraud. Like that other great Russian-authored fraud, the Protocols of the Elders of Zion, it has irreparably distorted the world’s perception of an entire people. But unlike the protocols, there was little of the malicious in the myth of the Russian soul. In fact, it seems to have been a response to the profound national identity crisis that permeated the work of the era’s writers, artists and thinkers. So when examining this clearly artificial idea, one finds that the motive, at least, was in some sense noble.

The very first problem with the Russian soul—or with any purported national characteristic, for that matter—is that it is almost impossible to tell who it ought to apply to. Russia is absurdly vast, geographically, socially and ethnically. Besides the Russians (whoever they are) it is home to Belarusians and Ukrainians, the Finno-Ugric Mari and Mordvins, and the Turkic Chuvash and Tatars—who for several centuries ruled the place—as well as Jews, gypsies, Volga Germans and a kaleidoscope of ethnicities and languages in the North Caucasus. And that’s just west of the Urals.

True, these people are only “Rossiysky”—Russian citizens, and we are speaking of a “Russkaya dusha”—the soul purportedly uniting all ethnic Russians. But just try to separate the Russians from this morass. And of those great 19th century cultural figures whose struggle with the question of Russian national identity produced this notion of a mysterious Russian soul, Pushkin was a quarter African, Dostoevsky half Polish, and Mikhail Lermontov reputed to be of Scottish ancestry. Nikolai Gogol was Ukrainian, and the renowned Russian painter Isaac Levitan was a Lithuanian Jew. But that didn’t stop them from coming up with a supposedly authentic, “true Russianness.”

Alexander Pushkin probably wasn’t the first man to use the term “Russian soul,” but he is the father of Russian letters, a genius who cannot have been wrong and, most importantly, he did not hide behind the accursed adjective “mysterious.” Tatyana Larina, the heroine of “Onegin,” was one of the first literary characters to be “Russian in her soul,” and serves as one of the clearest exemplars of its qualities. Tatyana (“a profoundly Russian being, herself not knowing how or why”), might not have spoken much Russian, but was guileless enough to open her heart to the man she loved in violation of every convention of high society, and loyal enough to refuse to leave her husband even when her true love was finally requited.

The Russian soul here is open to the point of guilelessness, fiercely loyal, and abhors deception. It overcomes artificiality in the form of Tatyana’s monolingual dependence on French, and falls foul of it in the court conventions she violates. It is also “wide” (an adjective second only to “mysterious” in association with the Russian soul), an attribute often vainly attached to some appreciation of Russia’s vast open spaces, but which really refers to a kind of expansive generosity that causes Russians to spend prodigally, usually when drinking. But the readiness to pay for everyone’s drinks, the joy at having the whole village celebrate with you, is offset by a corresponding lack of industry and a debilitating lack of appreciation for the value of the material. “We are lazy and uninquisitive,” wrote Pushkin in a more despondent moment.

Which is presumably why Russians like to think that all the oligarchs are Jewish, while Russians are loyal and open, abhorring deception, remarkably selfless and generous, but at the same time lazy and uninterested in the world around them. That is the core around which the “mysterious,” “wide” myth that is the Russian soul was wrought. Other themes gained prominence over time. In his 1880 speech at the unveiling of the Pushkin monument in Moscow, Dostoevsky raised his glass to a kind of masochism: Tatyana refused to give herself to Onegin “as a Russian woman,” for “a true Russian soul decides thus: let me, let me alone be deprived of happiness.” The (Jewish) Soviet writer Vasily Grossman called the same phenomenon the “slave soul,” and the 19th century philosopher Nikolai Berdyaev lamented it as “feminine passivity.” “Russia is full of contradictions, antimonies,” wrote Berdyaev in 1915.

And so the rumor spreads

There are other definitions, but most of them are embellishments on this core, and none is of much use. Russia has its fair share of cunning, evasive, self-interested and ambitious characters (as if to make the point, The Moscow Times on June 18 published an article about a “Growing class of workaholic Russians”), as well as forceful, masculine and dominant ones. All of those who hold Russian passports, speak the Russian language and—so far as such a thing is possible—are not only Rossiysky, but also Russky. It follows that either such a soul does not exist, or it is not exclusively Russian, or that not all Russians share in it.

The pertinent question, then, is not whether this kernel of Russianness exists—it doesn’t—but why such hopeless generalizations have been propagated with such energy by such otherwise great minds for so long.

There is a good explanation. Tatyana and Yevgeny Onegin were the Adam and Eve of a race of literary heroes who flourished for a century while Russia’s artists and thinkers struggled to define their Russianness, often in contrast to almost everything else. Hence the obsession with foreignness—Tatyana’s honest, open Russian soul lay dormant but active despite her French upbringing, and it overcame and fell foul of artificial, imported courtly standards—and the frantic search for some thread that linked all parts of a horrendously divided nation. Thus in Tolstoy’s “War and Peace” Natasha Rostova, another sheltered St. Petersburg lady and one of Tatyana’s literary descendants, finds in herself some innate knowledge “imbibed from the Russian air” of how to dance to a “Russian” peasant tune she has never heard.

To get an idea of how much of a literary undertaking this was, and just how much it consumed the literati, it’s worth reading the 1880 speech that popularly made Dostoevsky a “genius.” Pushkin, he told the crowd, had arrived “exactly at the beginning of our true self-consciousness,” immediately exhibited a “profound and purely Russian idea,” and had envisaged a messianic destiny for Russia and the Russian people “to include in our soul by brotherly love all our brethren, and at last, it may be, to pronounce the final word of the great general harmony, of the final brotherly communion of all nations in accordance with the law of the gospel of Christ.” That in itself was an attempt to find a mystical commonality between the Slavophiles and the Westernizers in the way Tolstoy had tried to link nobles like Natasha with the peasants.

All this is very beautiful, romantic, and even inspiring. The century-long search for Russia, in which the novel played the role of thesis, manifesto and thought experiment, produced some of the greatest novels ever to have been written, and they are rightly venerated. But whatever it was they were looking for was artificial. As Konstantin Levin, the virtuous farmer of Anna Karenina, whom Tolstoy put perhaps most of himself into, finds, it was almost impossible to bridge the gap between the nobility and the peasantry. No matter how long he studied, emulated and idolized the peasants, he was an outsider. And the peasants made up some 80 percent of the population. Maybe they were the guardians of a holier, purer form of Russian life—but neither Tolstoy, nor any of his peers, could be counted on to access or understand it.

So, the project to find a kernel of a soul binding the Russian people together was doomed from the start, and the formula served up by the giants of Russian literature is suspect. But there is one more reason for the inquisitive foreigner to have little patience with this soul business. And that is that nary a Russian believes in it, or they cannot agree on it. In a somewhat unscientific survey, conducted by Russia Profile, a prominent Moscow lawyer immediately said that “there is no such thing”—and then launched into a detailed account of openness, loyalty, laziness and uninquisitiveness. Asked whether that meant Pushkin was wrong, he said, “Pushkin cannot be wrong. He’s a genius.”

A senior manager at a Moscow bank, who mulled the question for a while, declared that the Russian soul was nothing more than a 19th century way of accounting for differences between Russia and the West, and that its sum was nothing more than the catalogue of contradictions observed therein. But he conceded that the “wide” Russian soul can indeed be scrutinized when Russians drink, and that it—along with vast quantities of alcohol—is an invaluable part of corporate team building. An accountant said that the Russian soul was patriotism and community spirit, and that it is largely dead—“in another ten years, it will be gone forever.” A pianist claimed that the only time she would use the phrase would be with a heavy dose of irony, and seldom positively. “Russian soul? Russian soul is when my friend gives her husband money to do some shopping, and he shows up three days later stinking of drink, covered in blood and he’s lost all his clothes. That’s Russian soul,” she said. A kindly taxi driver said “the Russian soul cannot hold a grudge,” paused, and added: “but my son was murdered by his cousin, and when I find him… such a man does not deserve to live.”

Now one might say that just proves that key element of the soul—that Russians are contradictory and unpredictable. But that is as much a cop-out as is surrendering to the adjective “mysterious.”