Churchill was pleasant to talk to 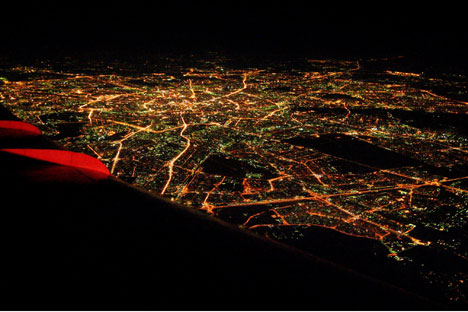 Starting in 1948 Yuri Sergeyevich Sokolov, now a colonel in foreign intelligence, worked in the United States for five years under diplomatic cover. His purview was scientific and technological intelligence. He was the liaison for the now famous Fisher-Abel, who went on to become a symbol of Soviet intelligence. He also made contact with Morris and Lona Cohen, who many years later went to England under the aliases of Mr. and Mrs. Kroger. They aided another famous Soviet illegal resident, Gordon Lonsdale, with whom they were eventually arrested and went on to spend years in the prisons of Her Majesty. But it turns out that Yuri Sergeyevich, who knew all these characters well, associated with people of a completely different kind as an official in the Ministry of Foreign Affairs. Sokolov died several years ago. This year, the 65th anniversary of the Victory over fascism, it seems fitting to finally publish this frank conversation with him:
Yuri Sergeyevich, when did you do your first work in intelligence?

How shall I put it? You’ll be surprised: it was at the famous Crimean or Yalta Conference, as they call it, in February 1945. I had the luck to be able to test myself in several related areas. I was sent there as a young operative ostensibly working in the Foreign Ministry — first in the Press Service, and then very soon in Protocol. The Big Three arrived: Stalin, Churchill and Roosevelt. The fate of the world was in a certain sense being decided at the Crimean conference, and we were entirely aware of the fact. We felt involved. I won’t mystify you: I did not have occasion to be at the conference in Yalta even once. The site, as we say, where I was working was the Vorontsov Castle in Alupka. This was the residence of British Prime Minister Winston Churchill. It was there that I had the opportunity to meet all sorts of different people, and to observe them. I mainly dealt with Englishmen. Although there were some Americans too.

And with Churchill himself?

Yes, with Churchill himself. The work in Protocol was such that I met him every day. He walked past me daily. He could not possibly miss my desk which stood at the entrance to the castle. Sometimes he addressed me with requests — he expressed them exactly, tersely, exceptionally succinctly. He was terribly busy, entirely taken up with his affairs, but he never forgot to greet me: ‘How are you today, young man? How are things?’

Truly, this doesn’t fit with the image of the threatening prime minister who would soon deliver that ill-fated speech at Fulton, which, as we feel here, inaugurated the Cold War.

But from Alupka, from the Vorontsov Castle, to Fulton was still quite a distance. One day Churchill suddenly started a general conversation about the Conference, about the weather, about young men like me who knew English. He stopped near us, smoking a cigar. To hear him, I have to admit, was flattering, especially about young people who spoke English. You know, at the time I could tell just by looking at him how the Conference was going and whether he was happy with it. Sometimes he would return from the meetings gloomy, his gait was fast, his nod cold. For us thatt was unusual. He would walk past us talking to himself and go straight to his quarters. But more often, he was in a good mood. And so then was I: that meant that at the Conference everything was all right.

It is true that he was always smoking a cigar

Yes, exactly. Not all the time, but quite often. And when he arrived in a good mood, then he didn’t take it out of his mouth. He would walk into the hall, as a rule, with a cigar just started, not smoked to the end. One time he left his cigar in the ashtray on my desk. He was probably used to doing that. I think people viewed it as a souvenir.

Do you still have it in your collection?

I have to admit that I did take the cigar and kept it at home. But then there were so many trips, so many moves. It’s too bad I don’t have it still.

What about Churchill’s entourage? Did they guess that you weren’t exactly from Protocol?

What do you mean? Of course not. We all tried and I tried especially hard. I was a model worker in Protocol.

What uniform? Bless you, no! Never in my life. In the Crimea I often had to meet or see off various high-ranking officials in the English delegation. Once I met Churchill’s daughter Sarah and brought her to the castle. Another time I met U.S. Ambassador Harriman’s daughter. I took Sarah from Yalta to Alupka and she, curious and interested in everything, asked us questions. We were fairly well prepared, we answered, and I even received a compliment from the daughter of the prime minister. I remember her as a lovely young lady, pleasant to talk to. And no arrogance whatsoever. On my way to meet her, I was a little nervous. But you know, we were ready to help all the guests right away and quickly get everyone settled. There was almost no operative work, as such — at least I had none. But the constant dealings, contact, providing of security, that was 100 percent. Yalta was not Teheran in 1943, of course, when a band of German allies tried to make an assassination attempt on the same three leaders. But what if saboteurs came to the Crimea, what if there was some carelessness, sloppiness.

From the interviewer:
You don’t say. In the fall of 2007, when Sokolov was no longer alive, I interviewed Churchill’s granddaughter. Celia Sandys, a professional television journalist, had come to Russia to shoot a film about the Soviet intelligence officers who foiled the planned assassination in Teheran. She met and spoke in a very nice, friendly way with Hero of the Soviet Union Gevork Andreyevich Vartanian. He and his future wife Goar and a group of young people had found the fascist saboteurs in Teheran. My impression of Churchill’s granddaughter was exactly like Colonel Sokolov’s story about his daughter.

Yuri Sergeyevich, were there ever any emergency situations at Yalta?

God spared us — not once was there anything of that sort. From time to time members of the English delegation would come up to me; some were high up in the military. They asked me if they couldn’t tour Alupka, a picturesque place. And we always organized an excursion. And there were protocol measures… I recall my work there with pleasure.