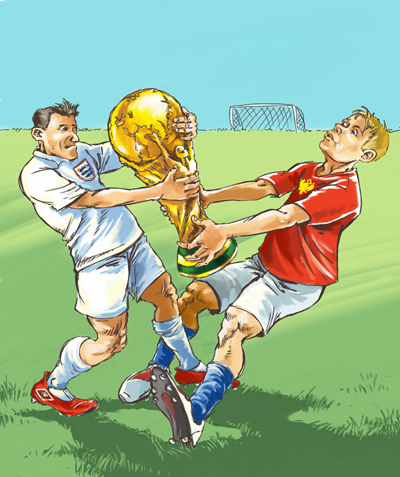 As the new English football season gets into its stride, many fans will be pleased to be able to concentrate on their club sides again and forget the disappointment of the World Cup.

South Africa 2010 will be a tournament Russian football fans won’t remember fondly, either; their country didn’t get there .

But for the English Football Association and the Russian Football Federation, the World Cup remains a hot topic; the World Cup Finals of 2018, that is.
England and Russia are two of the contenders to hold the finals in 2018, along with the USA and joint bids from Belgium and the Netherlands, and Spain and Portugal. Most commentators seem to agree that England or Russia is the most likely venue.

A delegation from Fifa, the international federation responsible for the World Cup, visited Russia and then England in August to assess each country’s facilities.
Russia’s advantage is that two of the four cities where it is proposed matches will be played are already preparing for major international sporting events: Sochi will host the Winter Olympics in 2014; and before that, Kazan is the venue for the Student Games in 2013. Moscow and St Petersburg are Russia’s other planned venues.

England’s clear advantage is that, unlike Russia, which currently has only one world-class stadium (Luzhniki, in Moscow), there are several modern stadiums with sizeable capacities.

But just as important for organisers of major tournaments is the infrastructure around the event. And that’s where business comes into its own – if the sporting authorities engage with business in time.

The World Cup, the Olympics (summer and winter), the Student Games and hundreds of other events are about not just the construction of suitable stadiums. They are about building hotels and restaurants for the fans (and the network of services which goes with those establishments: food and drink, carpets, furniture, a reliable water supply and sewage system and so on); an efficient system of transportation from accommodation to stadium for participants and spectators; reliable ticketing systems and security and safety at the venue. In short, putting on a major sporting event is like running a city for a few weeks.

For Russia’s bid for 2018, it is to be hoped that lessons have been learnt from the preparation for the Sochi games.

Thanks to bureaucracy and poor organisation, very little was achieved for the first two years after the games were awarded to Sochi in July 2007.

A number of foreign companies which were keen to get involved gave up in frustration after banging without reply on the doors of the Olympic Organising Committee.

The good news for business is that because of this early lack of organisation (now much improved), in 2010 there are still opportunities for British business wanting to play a part in the Sochi games.

England’s bid for the World Cup 2018 is boosted by the experience many companies have with the preparations for the London Olympics. This experience, and the stadiums which already exist, should give England the advantage for 2018.

But that ignores the politics which always play a major role in such decisions.

All will be revealed on December 2. Whichever country is chosen, let’s hope the sporting authorities have the sense to engage swiftly with business.