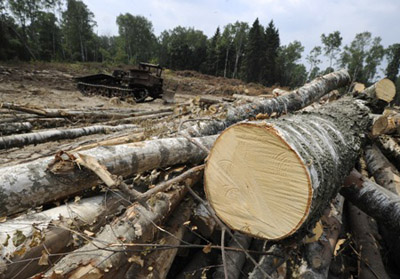 Trees are felled in the Khimki Forest Park to make room for theconstruction of the Moscow – St Petersburg highway.”Source: ITAR-TASS / Alexei Filippov

The Internet, the principal forum for Russian social debate, was awash in stories of how President Dmitry Medvedev brought the confrontation surrounding the construction of the first highway through Khimki forest to an end.

In his video blog on the Kremlin’s website, Medvedev stated: “The construction of the highway was submitted to the government for consideration and a judicial ruling. Our citizens, however, including representatives of United Russia and the opposition, as well as associations and experts, feel that this project needs to be re-examined.”

To permit the construction of the highway by French construction company Vinci, 144 hectares of trees were to be cut down in one of the belts of greenery filtering the air around the Russian capital. This issue has been at the heart of litigation between militant environmentalists and the authorities since 2007. The environmentalists brought the case to the European Court of Human Rights in March 2009, thus adding fuel to the fire at the local and federal levels.

Medvedev’s goodwill gesture represents a true change of direction, just as the conflict had turned violent. At the end of July, activists occupying the park were forced to disperse by the Special Purpose Police Unit, or OMON. The activists’ leader, Evgenia Chirkova, said she had received death threats.

But now the situation has changed. In July and August, forest fires on the outskirts of Moscow nearly suffocated the city with smoke. The devastated forests became the symbol of an environment too often sacrificed for economic interests. At least one unanswered question remains, however: Will the Russian authorities learn a lesson from this summer’s devastating fires and enact measures to protect the environment, or instead will they limit themselves to providing funds for reconstructing the houses destroyed by the forest fires? Medvedev’s commendable decision is an example of the Kremlin paying attention to the exasperation spreading through Russian society, but it is weakened in the minds of the people by the poor way the government handled the forest fires. As part of a public relations campaign, the Kremlin is keen to be seen as the righter of two wrongs, as local authorities have been criticized for their gross negligence.

Although Khimki environmentalists should not rejoice too soon, Medvedev’s initiative indisputably represents a step in the right direction.