Smoke, heat and a cold shower – the flavor of Moscow’s summer 2010 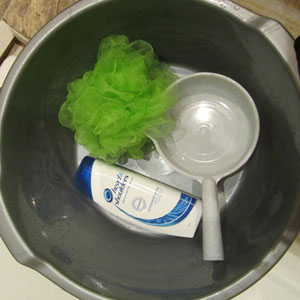 Living the life of a chain smoker, that’s what every Muscovite had to experience this summer. Heavy smoke blanketed the the city, leaving the visibility as bad as on a foggy November day. That didn't stop the hardcore Russian smokers, who deliberately give their lungs an extra kick, lighting their cigarettes.

From our air conditioned room, I could easily believe that it was autumn as the thick smoke often even blocked the sunlight out. It seemed like living in a bad horror movie, toxic smoke slowly creeping into the household under the door. It found its way into the metro and even into our office, where our office manager seriously started to hand out masks. A nice lady on the phone at the Austrian embassy recommended that I take a vacation and leave Moscow, as many expats did — leaving or just staying on vacation longer. Some companies even sent their employees home.

If that was not enough, the mercury rose to 40 degrees Celsius. Tropical temperatures plagued Moscow while many European countries had 10-20 degrees less. But Moscow cares about the wellbeing of its residents people and so turns off the hot water in apartments for about 2 weeks each summer, to provide a cool refreshment. Of course this is just done to replace water pipes and happens every year and to every household. While some people install fixed water boilers in their bathrooms that hang there for the other 50 weeks of the year for nothing, others invest in small plastic tub that features a little plastic bowl with a handle. This together with an electric teapot is the basic equipment for getting clean during the cold water time. This obligatory tub for mixing hot and cold water can be found in many households. What would we do in Austria if the hot water would be just turned off? Probably complain, like we do when we are even just a day without it.

And now imagine the metro, stuffed with sweaty people, who, by the smell of them, are suffering through the lack of hot water by avoiding showers. The metro became a kind of communal banya, but without the pleasant smell of wood and birch branches. Since it was so hot, some men did not even bother to button up their shirts right and allowing everyone to admire their “admirable” Russian bodies.

But eventually the summer came to an end and suddenly heavy rain showers cleaned the air, hot water came back to our bathroom and the temperatures finally cooled down. August ended with its recurring 31st-of-the-month demonstration on the square next to the Mayakovskaya metro station, which I unknowingly entered, finding myself next to a rather civilized crowd of demonstrators and policemen. A few were taken to buses, a little girl on her father’s shoulders held a sign up to support the demonstration. The police dogs seemed to be rather bored and doze off next to their master’s feet. Since the
Triumfalnaya square was closed for the demonstrators, they stuffed up the corner around the metro station. Pushing through the crowds (and taking some quick photos) I encountered some friendly police guys, leading the way to the metro.

What an unforgettable summer of 2010– confined to a little air conditioned room at home, trying to work with burning eyes because of smoke and on the way home swathed in a face mask, sunglasses and a scarf.

I stood my ground here in Moscow, I didn’t leave for the heat or smoke (although I probably will regret this some day in the future, if I ever experience severe lung problems). However, I did allow myself a little weekend break, which I will write about in my next blog.