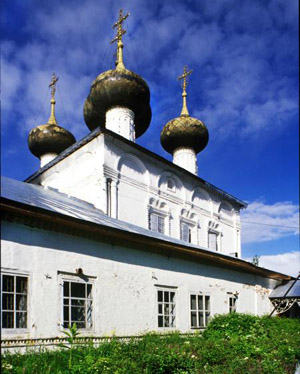 Among the numerous historic towns of the Vologda territory, Ustiuzhna is perhaps the least known.

Located on the Mologa River, a tributary of the Volga, in the southwest corner of Vologda Region, the town is often confused with Velikii Ustiug, which is situated almost 700 km distant in the northeast corner of the province. Ustiuzhna is not particularly remote by Russian standards, yet it has no rail link and is several kilometers from the main road between St. Petersburg and Cherepovets.

Walking along the town’s quiet streets, many of them unpaved, gives the impression of being in a provincial trading center that has changed little since the 19th century. The 20th century, however, inflicted much damage here, as in so many other provincial towns. Although every neighborhood seems to have its church, most of them were vandalized or destroyed during the Soviet period. Only one, dedicated to the Kazan Icon of the Virgin, is currently used for worship. Fortunately, this church and its frescoes constitute a masterpiece of Russian religious art.

Ustiuzhna’s wealth in the medieval period was based in large part on nearby deposits of bog iron suited to primitive smelting methods. The town was first noted for its iron in the mid-13th century, when it became one of the earliest Russian centers of metal working. Ustiuzhna reached the height of its iron production during the 16th century.

With the 18th century rise of the Urals as Russia's primary metal producer, Ustiuzhna settled into the status of a modest regional town. A major change in its appearance occurred during the reign of Catherine the Great, who in the 1770s brought order into the planning of Russia’s towns. The Ustiuzhna plan, approved in 1778, skillfully connected the two main churches: the Cathedral of the Nativity of the Virgin and the Church of the Kazan Icon.

The Cathedral of the Nativity, built in 1685-1690, is the oldest surviving church in Ustiuzhna. The exterior is relatively simple, but the interior has an extraordinary iconostasis whose style can be traced to work done in the Moscow Kremlin in the late 1680s. Its carved, gilded frame ascends in five rows in the canonical Orthodox pattern, from the Local Row at the bottom to the Patriarch's Row at the top. The cathedral currently serves as the town museum.

Ustiuzhna’s other stunning monument of religious art, the festively decorated Church of the Kazan Icon of the Virgin, was begun in 1694 by Grigory Stroganov, of the renowned Stroganov merchant dynasty, who had commercial dealings in Ustiuzhna. The Kazan Church contains a soaring iconostasis, but its glory is the full array of mid 18th century frescoes, painted in a robust style by masters from Yaroslavl. The frescoes begin in the small narthex, which includes the Seven Days of Creation, the Expulsion from Paradise, and the Last Judgement. The interior of the main structure creates an overwhelming impression, with depictions of the Passion of Christ, major church festivals, images of the Virgin Mary, and scenes from the life of St. Catherine.

As for secular architecture, many of the town’s charming houses and commercial buildings have survived. Despite losses during the 20th century, the historic center of Ustiuzhna, with its remarkable artistic treasures, evokes the rich cultural heritage of Russia’s northern towns.