Wandering in the desert no more 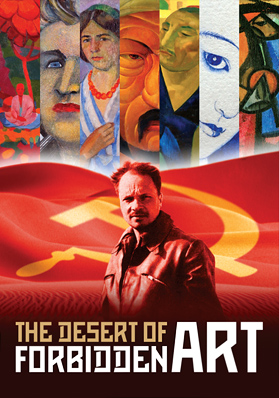 “The work of art is a scream of freedom,” said Christo, the Bulgarian-born American artist whose experience of growing up in a Communist country left a deep mark on his creations.
In Russian art, there have been many “screams of freedom,” especially during the repressive Stalin and Brezhnev years, when artists who didn’t paint in the accepted Social Realism style (think smiling factory workers and singing proletariat marching arm in arm) were shunned, sent to mental institutions and exiled to labor camps.

This shameful legacy is chronicled in a new documentary “The Desert of Forbidden Art,” currently making its way to film festivals around the world. In the film, directors Amanda Pope and Tchavdar Georgiev tell the story of one man who dedicated his life to hunting down works by forgotten Russian Avant-garde artists, amassing one of the largest collections in the world in the process.

The collector, Igor Savitsky, born into a bourgeois family shortly before the Russian revolution, went on to collect more than 44,000 artworks and open a museum, which today is the second largest collection of Russian avant-garde art in the world after the Russian State Art Museum in St. Petersburg.

“We wanted to awaken the curiosity of the collection…it really is a treasure trove for any art historian,” said Pope, who teaches at the University of Southern California School of Cinema. “But the film is also about the price of being a prophet for your culture, for which artists often are.”

The film features the works of formerly unknown artists such as Aleksander Volkov whose art now commands millions of dollars. But what is most astounding about Savitsky’s museum is that it was built in Karakalpakstan, a dusty autonomous republic in Uzbekistan, where most people still scratch out a living as cattle herders or farmers.

The remoteness of the location is precisely what made it possible for Savitsky to create a museum, which today draws visitors from around the world. Ironically, Savitsky was able to secure the support of a local Communist Party boss to receive government funds for his collection of what many considered “anti-Soviet” art.

The film, which has already gotten rave reviews, is based on interviews with Savitsky’s friends, artists’ relatives and extensive archival footage acquired from the Moscow State Archive. Both the access and what the filmmakers found there was astounding, they say.

“The government had all kinds of wonderful photographs and film that had never been opened,” said Pope, adding that archival material from the film would be donated to USC’s Institute for Modern Russian Culture.

Although a film about art, “Desert of Forbidden Art” is ultimately about the tragic history of Stalin’s reign over the Soviet Union, when all vestiges of pre-revolutionary Russia, such as churches, were destroyed and millions of people were killed for not toeing the Communist Party’s ideological line. The film tells the story of artists like Mikhail Kurzin, who fused Soviet training with the colors, history and traditions of the East, but whose works authorities deemed inappropriate. Kurzin, for example, was sentenced to 10 years in a Siberian labor camp for “anti-Soviet” statements.

Another artist profiled in the film is Yevgeny Lysenko, whose bewitching masterpiece “Fascism is Advancing” captured the mood of the times with a blue bull with eyes “like the barrel of a gun.” Despite his talent, Lysenko was sent to a mental institution and is not widely recognized in Russian art history.

Since the “discovery” of the museum, its masterpieces have attracted collectors from around the globe. But despite subsisting on threadbare funding, the museum’s director Marinika Babanazarova, whom Sativsky appointed on his deathbed, has refused to sell any pieces, convinced that doing so would spell the beginning of the end for the one-of-a-kind collection.

The masterpieces may have been saved from the long reach of the Soviet propaganda machine, but their future is still threatened, this time from Muslim extremists vying for power in the former Soviet republic and the anti-Russian sentiment that remains strong in the region.

“Unfortunately, due to political and economic conditions in Central Asia today, the Savitsky collection could cease to exist in its present form in any time,” Pope and Georgiev say. “We hope this film will function as an advocacy tool and a catalyst to protect this unique 20th century cultural institution.”

“The Desert of Forbidden Art” will be shown at film festivals in Martha’s Vineyard and Cambridge, Mass., San Francisco and Vancouver in the coming months. In 2011, it will be broadcast on PBS’s Lens program. For more information about the film, including upcoming screenings, visit www.desertofforbiddenart.com.