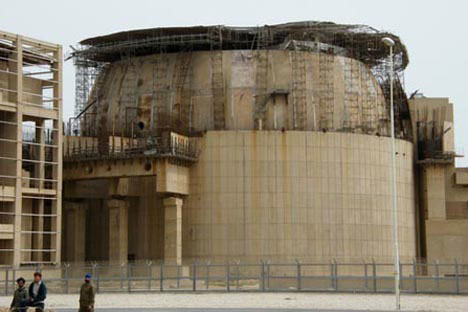 The Russian-built reactor will be loaded with fuel under the strict control of the UN's nuclear watchdog IAEA.

The plant is expected to be fully operational in about a month.

Russia will run the facility, supply the fuel and take away the waste, which eases some fears that Tehran could use the reactor to make nuclear weapons.

Iran is currently under UN sanctions aimed at pressuring it to abandon its uranium enrichment program.

Launched by Germany’s Siemens in the 1970s, construction was brought to a halt after the Islamic Revolution. No matter how hard the Iranian authorities tried to re-launch the project, the Germans refused to do so. As a result, Russia over took the project in the 1990s.

For them the task was to install a new reactor in an already existing building.

Reconstruction is always more difficult than building from a scratch. Russian engineers had to fit in modern equipment that today normally requires a much larger space.

This is one of the reasons why the launch of the station has been postponed so many times. For Iranians it meant a delay in their nuclear dream, for Russian contractors it meant more time away from home. However, Russians were well provided for by the Iranian government – such as being given a separate house for every family, as well as a kindergarten and school for their children.

The launch of the Bushehr plant is a major political and economic milestone for Iran. For Russian contractors, it is the long-awaited result of intensive work of about 3,000 specialists.

Just as Iranian society is somewhat isolated from the rest of the world, the Russian village in Bushehr is cut off from the world by a wall guarded day and night by Iranian police. Russian women are required to observe Muslim dress code; men have to forget about alcohol. For Russian teenagers life feels very monotonous.

The construction of the Bushehr plant has always been a bone of contention in international politics, but for thousands of men and women it has meant years away from home building the first nuclear plant in the Middle East.