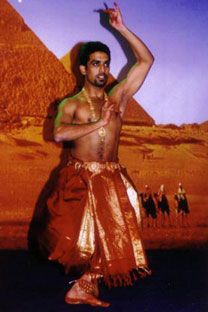 In 1987 Nicholas Roerich’s paintings, for the first time exhibited in a Sochi museum, became a gateway to the splendor of Indian nature and beauty of its traditions for the people of the region. Since then, Russians, and especially Kubans, have been showing increasing interest in Indian culture.

This summer, Sochi, host of the 2014 Olympic Games, held the “Mysterious” India exhibition. Over 500 people attending the opening ceremonies were deeply impressed not only by the ancient palm leaf manuscripts and knives used for hunting tigers, but also by the “Indosta” dancers’ performance.

Mr. Arunmozhidevan, the dance group’s leader, has been living in Russia since 2002. When he first arrived in Krasnodar, his only intention was to enroll at the local medical school and become a doctor, but he ended up organizing an entire Indian diaspora made up of Russians.

“This year I celebrated my 32nd birthday. My dance teacher in India was himself a professional dancer. My first passion was Indian disco, but later I developed great interest in spiritual and folk choreography. My father, however, is a doctor and my parents wanted me to follow in his footsteps, so I came to Russia to study medicine. Initially, the only Russian words I knew were “s dobrym utrom” (good morning).”

Harish soon adjusted to the new environment and came to appreciate the taste of Kuban borsch and various stuffed pies that his elderly landlady Lyudmila baked for him. He admits that the desire to make some money prompted him, an ordinary Russian university student, to launch his teaching career.

“$50 was enough to pay my rent and buy food in 2002, while today I need as much $300-450 just to make ends meet. Having said that, Russian education is still much cheaper than in India, while Indian dance classes in Russia cost almost twice as much as in India: Indian dance teachers charge three dollars an hour, while in Russia they charge at least five dollars,” he says. Harish recommends an individual training approach. His first Russian dancing group included four students and a professor from various Kuban universities. Four out of five ladies were typical Russian blondes, while only one of them, Movina Bagdasaryan, an ethnic Armenian with black hair and a dark complexion, could pass for an Indian. “When I was putting my group together, I didn’t pay very much attention at all to looks: my key selection criteria were spiritual integrity, good stamina and a passion for dance. Indian dancing physically demands roughly the same as classical Russian ballet, yet Russian women find it difficult to replicate some of the moves involved. Indian body language is very expressive. Indians have control over all of their muscles. It’s just something we are born with. Russian girls who want to learn the art of Indian dance have to start from scratch. Many drop out at the beginning, unable to cope with the physical demands. But that’s only with those who just aren’t into it spiritually.”

“I just turned 21 when we started to practice the basic moves in Indian choreography. When we finished our lessons, my entire body was sore, including my back, butt and inner hips. When we got these down, however, the rest took much less effort,” says Marina.

Marina began learning Sanskrit and English on her own. Besides, she had to read books on Indian mythology, because this is where Indian dancing comes from.
Kuban girls have been attending Harish’s classes for six years now, and today they cannot imagine their life without Indian dance. Tatiana, a professor at the Kuban State University of Agriculture, prefers a classical north Indian dance style called “Kathak”. Nastya, an accountant, has not lost her enthusiasm for dancing despite being married and having given birth. Olesya studies both Russian and popular Indian choreography.

Being exposed to Indian culture has gradually changed these girls’ lives: They all became vegetarians and have learned to see things more positively.
“All the aggression and rage built up within us oozed out like sweat through our pores. Now my real life really begins after work, in the dance room, where I can relax and get some peace of mind,” says Marina.

The girls say Harish was the first Indian they had ever seen. Their new teacher, although young and handsome, was very strict and disliked unwarranted technicalities.
Only after six years of study did Harish allow his students to perform Indian folk dances in public. He had decided that their training was still inadequate for a classical dance program.
Today, thanks to Harish’s dance school, dozens of Krasnodar residents got a glimpse of Indian culture by creating their own pseudo-Indian dance diaspora.

Buoyed by an increased interest in Indian dancing, ethnic shops selling various Indian goods popped up all over Kuban. The funny thing is that their owners are not only Indians, but also Russian businessmen enraptured by Oriental culture.

“Six years ago we had to sew our stage costumes ourselves using my family photos as the base for our patterns and clothing designs. It took us eight months to tailor a handmade peacock costume for my solo performance,” recalls Harish.

If you want to buy an Indian national costume from one of the Krasnodar ethnic shops, however, be prepared to fork out the big bucks, since while you can find a Panjabi costume for $33, a sari will run you at least $166.

Indian jewelry is also in demand in Kuban, where plain silver bracelets are sold for no less than $80 and classic silver dome earrings for $33 (delivery not included). Various kinds of bracelets range from $25 to $70 and more.

“If Indian and Kuban women have something in common, it’s their love for jewelry and bright make-up,” says Harish.
His pupils, however, were quick to learn the art of Indian hairdressing, while putting on traditional Indian make-up takes them about 40 minutes. What upsets them most is the lack of Indian facial cosmetics. Harish believes that this market gap presents a good opportunity for businessmen from India, a place where cosmetics manufactures use herbs and natural oil as key ingredients in their products. The Russian market has witnessed a growing demand for natural Indian cosmetics, but today it is sold only by small Ayurvedic shops that are few and far between.

Today admirers of Indian culture living in Moscow, Saint-Petersburg, Vladivostok and Yekaterinburg put together their own clubs and associations. Having Indian consulates in these cities has provided a real boost for strengthening cultural and economic ties between the two countries. Southern Russia, however, is yet to see an Indian consulate in its neck of the woods, so it is up to Indian students at local universities to make up for this getting people involved in local people in Indian culture.

Harish is the winner of many Russian and Kuban student competitions in the national dance category. Photos provided by Movina Bagdasaryan and Harish Arunmozhidevan.