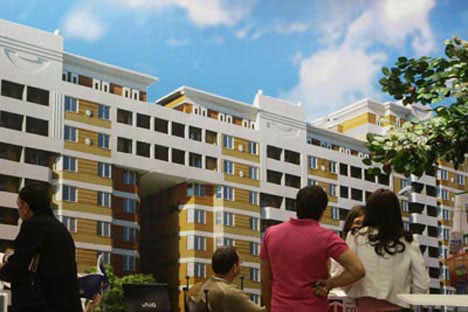 For Victoria Sherbakova, a doctor at a private liposuction clinic in Moscow, the hunt for a new home started in rather unusual circumstances. Like many Muscovites, she and her husband plumped for a house in the Moscow Region rather than the city as, “you get more for less.” Everything was going on well till she discovered that her three-year-old daughter Sasha was going blind and badly needed quality medical care. But much to her dismay, the city hospitals won’t treat her daughter as medical services are supposed to be provided by the regional authorities. Sasha was, therefore, not eligible to be treated at the hospitals in the capital.

“The hospitals in Moscow are the best in the country, but you have to have a Moscow city registration to be admitted,” says the 36-year-old Sherbakova. “So we decided to give up our place in the region and move into the city.” Finding an apartment was easy. Raising the money to pay for it turned out to be more complicated despite €4,000 a month she and her husband made between them – nearly four times the national average.

Sherbakova’s is a typical story of Russia’s emerging middle class hunting for a new house. Adding to their woes is the ponderous paper work needed to convince the bank to lend to you. She was lucky as her clinic was prepared to give her all the documents that prove her income; many companies still operate in the grey economy and officially pay only a small part of their employees’ salary through the bank, with the rest paid in cash to dodge taxes. It’s a big problem for apartment buyers as they can’t prove their income.
Next, after searching for a mortgage lender for a month, Sherbakova stumbled across Kredtmart, Russia’s only mortgage broker, a company founded by James Cook, an American who pioneered the mortgage business at the start of the last decade as CEO of Delta Credit, a mortgage specialist backed by US government money. Kreditmart resells mortgages for a dozen commercial banks and because it gets a discount, it can offer punters better interest rates than the banks themselves.

Thanks to her job and healthy family savings, Sherbakova is an ideal customer for Russian banks and sailed through the process relatively easily. “It all went very quickly. We got the documents from the clinic in a week and the bank loan was approved even faster.”
But not everyone is so lucky.

The demand for new housing is huge and eight out of 10 Russians want to move house, says Cook. The 2008 financial global crisis hurt the mortgage business badly. Previously, there were a dozen commercial banks giving loans, but most put their mortgage programmes on ice in 2009, leaving the two state-owned banks — Sberbank and VTB Bank — with some 80% of the business. However, the market is picking up fast now.

“The number of loans made has gone up dramatically in the last two months,” says Cook. “We are still expecting a wobbly six months, but most people in Russia believe the worst of the crisis is behind them. Europe is the wildcard that will determine what happens in the rest of the year.”

Russia's state-owned Mortgage Agency (AIZhK) forecasts that mortgage lending in Russia will increase to RUB70bn-RUB85bn ($2.3bn-2.8bn) between April and June from RUB28bn-RUB34bn ($900m-1.1bn) in the same period of 2009. Still, the market has some way to go to recover all the ground lost in 2009: the mortgage business reached a peak volume of RUB685bn ($22.8bn) in 2008 (including the last quarter where almost no business was done at all), but the volume of deals expected this year is about RUB220bn ($7.3bn).

The most onerous part of buying an apartment in Russia is that the banks ask for fat down-payments, which could go up to 40% on a RUB6m loan ($200,000), as it was in Sherbakova’s case. But it was not the end of her ordeal. She discovered that the owner of the apartment was willing to sell, but only wanted to put the sum of RUB2m on the contract. The state offers tax breaks on the first RUB2m, but taxes the rest. Cook says it is a very common problem and many sellers insist on only declaring part of the sale to the authorities and the rest is done on trust – off the books. As everyone in Russia was given their apartment after the collapse of the Soviet Union and most people sell their communist-era home to finance the purchase of a new one, few people need to borrow and, as a result, the bulk of private real estate deals are done in cash. In some cases, the seller often demands that the buyer also pay the taxes. Sherbakov managed to haggle and work out a compromise solution. “Of course the apartment is only two rooms and much smaller than our old place. And my commute to work is longer, but Sasha is now getting the treatment she needs and we are happy with our new home,” she says.

Sensing a growing demand for housing, the Central Bank of Russia has been aggressively driving down interest rates, reviving the real estate market which was badly hit by the recession. There is a desperate lack of housing – especially new housing, as few Russians want to move into a Soviet-era apartment block. The transfer of apartments to the occupants in the early 1990s was one of the biggest transfers of wealth by any government worth hundreds of billions of dollars on paper, but until the emergence of the mortgage market homeowners had no way to tap the value of their bricks and mortar.

With a population of about 12m Moscow is by far the largest city in Europe, but Roland Nash, head of research at Renaissance Capital, says that to meet the burgeoning demand for new housing another Moscow would have to be built. “Between 2005 and the first half of 2008, we were seeing triple-digit growth in the mortgage market, but by the end of that year the crisis kicked in and the business fell off a cliff,” says Cook. “Business restarted in 2009 and has been building from there.”

Even at its peak, Russia’s mortgage business was equivalent to 3% of GDP, compared to mortgages in Poland (10% of GDP) and in the UK (60% of GDP.)
But prices have recovered fast. Buyers were expecting prices to fall sharply last year in the midst of the crisis, but most sellers shrewdly took their properties off the market. The result was a moderate fall in prices, which have already recovered to their pre-crisis levels and is now growing again: a typical two-room apartment in a newly built building costs $2,000 per square meter in Moscow and some 30% less in the regions.

The development of the mortgage market in Russia, which emerged only in 2003, has been held back by high interest rates that were kept up in an effort to combat high inflation rates. Punters wanting to buy a home were looking to pay 14-16% on a 20-year loan. But the silver lining in the crisis is it has reduced inflation, which has fallen to around 6% now. But because no one wants to live in the old Soviet buildings, the developers are having a field day.

“One of the quirks of Russia’s mortgage business is that the first loan is not actually a mortgage at all, but a contract where the buyer borrows money from the bank that is given to a developer, who then uses the money to finish the building. Only once the construction is completed, is the loan converted to a traditional mortgage,” says Cook.

This sounds like a hair-raising way of buying a home, but Cook says that demand is so high that if the buyer changes their mind, it is easy to sell the contract. And Russians like this deal, as developers offer big discounts if the buyer is willing to pay for an unfinished property sight.