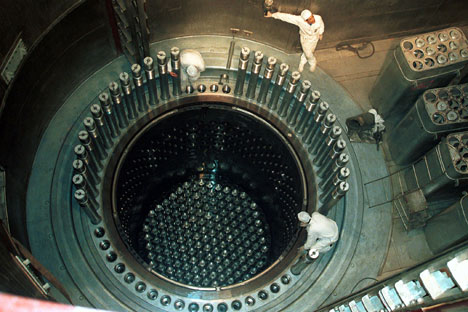 The idea of building more efficient and environmentally friendly nuclear reactors, which Rudolf Baklushin helped test in the Soviet Union decades ago, has had its ups and downs. As deputy chief engineer, he oversaw the construction and the opening of the first Soviet fast breeder reactor in 1973, which produces more fuel than it burns and yields less dangerous waste. "I volunteered because it promised new, interesting work and new prospects for the industry," said Baklushin, who is now a nuclear scientist at an institute near Moscow.

But costs of building such reactors were high, and when geologists discovered new, extensive deposits of uranium, developing this technology was no longer a priority.
But despite being at least half a century old, the idea has acquired a new sense of urgency recently since President Dmitry Medvedev made it part of his modernization agenda.
Should further tests of the technology succeed, Russia will seize its lead in this area and to start to commercially produce the reactors by 2020.
"I would say Russia is certainly the leader in fast reactor technology," said Michael Driscoll, professor emeritus of nuclear engineering at Massachusetts Institute of Technology. "Second, I would say, is France."

Some of the 26 reactors that Rosatom, the state nuclear corporation, plans to build before 2030 will use the new technology, Rosatom spokesman Sergei Novikov said. If all goes well, it will completely phase out the current, third-generation equipment by the start of the next century.
With Medvedev backing the project, the government has allocated 110.4 billion rubles ($3.6 billion) for research in this and other nuclear energy areas until 2020 under the New Generation Nuclear Technologies program adopted in February.

Rosatom is making an effort to commercialize the fast breeder reactor because, Novikov said, the world is set to run out of affordable uranium in at least 12 years, given the plans by Russia, China, India and other countries to build more reactors. The price of uranium has shot up from at least $7 a pound in 2005 to $60 a pound (as of June 30) for long-term contracts.
The world may run out of uranium resources completely by the turn of the next century if there's no replacement for the current technology, said Andrei Mikshes, an industry analyst at the Natural Monopolies Institute, a think tank.

The fast breeder reactor achieves what industry insiders call a closed fuel cycle, the ability to use byproducts from one nuclear reaction as fuel for another, allowing for a spectacular expansion of fuel reserves. It usually uses mixed oxide fuel made up of about 20 percent plutonium and 80 percent plain, un-enriched uranium that transmutes into more plutonium as it burns. Typical fission reactors use uranium-235, a fuel that constitutes less than 1 percent of uranium ore, which must be enriched in order to be used in existing reactors.

Traditionally, uranium-238, which constitutes much of the uranium ore, has been unusable, but the fast breeder reactor would allow for its conversion to plutonium, thus making it reusable as a nuclear fuel.

In pursuing the technology's development, Russia may hope to market the design internationally before everyone else does, said Francis Slakey, a professor of physics at Georgetown University Slakey.

"They may see that there's an inevitable market for the fast reactor, and they want to get ahead of where the other competitors are," he said. "So it may be a business decision on the part of Russia."

International sales of such reactors, however, would come under the regulations of the Nuclear Nonproliferation Treaty because of the weapons-grade plutonium that they generate, said Mikhail Kovalchuk, director of the Kurchatov Institute, the country's leading nuclear research establishment. And France, one of the potential buyers, has already mastered the technology of the closed fuel cycle, according to the institute. The country is committed to build a small reactor unit — in addition to its existing one — come 2020, Kovalchuk and Driscoll said.

India will start putting a series of fast breeder reactors into operation next year, while China is developing the technology at a very rapid pace, Kovalchuk said. Japan and South Korea have a longer way to go, and they move slower, he said.

Fast breeder reactors were initially at least one and a half times as expensive to construct as the conventional equipment. But the costs have been reduced as the design gets simpler, said Baklushin, a researcher at the state-run Alexander Leipunsky Physics and Energy Institute. He estimated their cost at $1,600 per kilowatt of capacity at most.

India offered the same amount of money to Russia to build pressurized water reactors, or PWRs, at Kudankulam, India, where work is ongoing. The reactors, also known by their Russian acronym VVER, have developed an increasingly complicated design over time, which has pushed up costs, Baklushin said. It was a VVER reactor that Russia launched recently in Bushehr, Iran. The government has plans to build them also in countries such as Turkey, the Czech Republic, Vietnam, Bangladesh and Argentina. They may become a notch more expensive as Russia — under Medvedev's modernization plan — is going to upgrade them by the end of 2012 to use more digital technology and become more competitive in the U.S. and European markets.

Russia has already tested the next generation of nuclear rectors at two sites. Baklushin's demonstration reactor, called BN-350, located near the city of Aktau on the Caspian Sea in Kazakhstan, shut down in 1999, but Russia has been operating its successor, BN-600, at the Beloyarsk Power Plant near Yekaterinburg since 1980. Rosatom is now building an improved and more powerful BN-800 at Beloyarsk to continue studies.

Russia is researching thermonuclear fusion as well — a technology that does not require a mineral fuel like uranium and may replace fast breeder reactors. The country is sharing that research with the European Union, the US, Japan, China, India and South Korea, with the goal to jointly build a test reactor in France.

Despite repeated delays and its swelling budget, Russia will continue to participate in the project called the International Thermonuclear Experimental Reactor, or ITER, Medvedev said in his state-of-the-nation address in November.

"It is this technology that is the future," he said.