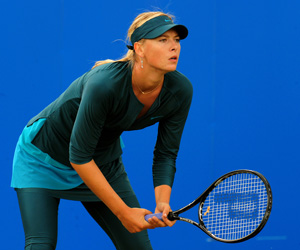 The history of Russian players at the US Open—as in every Grand Slam tournament of the last decade or so—has been largely written by women players. With the exception of a memorable performance from Marat Safin in 2000, no other Russian male player has ever even been to the final.

On the women’s side, however, Russians have appeared in the final three times in the last six tournaments, winning it twice, with the 2004 final being an all-Russian affair between Svetlana Kuznetsova and Elena Dementieva.

But when the 2010 tournament got underway a week ago, the talk surrounding the Russian players was much quieter than in 2006, when Maria Sharapova cruised through two weeks at Flushing Meadows to win her third Grand Slam title. Or in 2004, when three out of four Grand Slam titles, with the exception of the Australian Open, went to Russian players.

This year’s US Open did not get off to a good start for the Russians. On the very first day, former world number one and three-time Grand Slam finalist Dinara Safina fell to the erratic Slovak Daniela Hantuchova. One week later, though, it’s possible that there will be another all-Russian women’s final. For those who like to dream, the current situation in the women’s draw even allows a wild possibility of all non-Russian players crashing out in the quarterfinals. Midway through this year’s tournament, there are still a few Russian women players in last 16 and, given the form they’re exhibiting, the odds that one of them will eventually lift the trophy on Sept. 12 just keeps growing.

Former winner Maria Sharapova, the 14th seed, has only improved as she progressed through the first rounds. She started the 2010 campaign by dropping a set to Slovakia-born Australian Jarmila Groth, emerging to eventually win the match 4-6, 6-3, 6-1. In the next two rounds, Sharapova showed some of her best, destroy-you-all, tennis, giving away three games to second round opponent Iveta Benesova of Czech Republic and routing United States’ Beatrice Capra to love in the third.

Sharapova is now facing Danish Pole Caroline Wozniacki, the top seed, in the round of last 16. If she gets past the Dane, who has only given in three games since the start of the tournament, only the third seed, Venus Williams, remains to stop her, and only in the final match at that.

Other Russian players still in play include another former champion, Svetlana Kuznetsova, who is facing Slovakia’s Dominika Cibulkova in the fourth round. It’s hard to imagine that Kuznetsova will clear that hurdle while on her way to quarterfinals. A possible quarterfinal clash between Sharapova and Kuznetsova could be in the cards, too.

In the next section of the women’s draw, there’s seventh seed Vera Zvonareva who is having, in theory, the easiest way forward to the semifinals. Facing non-seeded German Andrea Petkovic in the fourth round, Zvonareva should be on her way to play either the 31st seed Kaia Kanepi from Estonia or the 15th seed Yanina Wickamyer of Belgium for a place in the semis. There, she might meet Sharapova, Kuznetsova, or – still most likely – Wozniacki. An extra motivation for Zvonareva should be that she has already equaled her US Open record by reaching the fourth round and it could be now or never for the 26-yeard old to improve on it.

In contrast, the bottom half of the draw never looked all that optimistic for the Russian players. The 20th seed Anastasia Pavlyuchenkova easily lost in straight sets to the sixth seed and this year’s French Open champion Francesca Schavione from Italy. To complete the miseries of the day for Russian women, the 12th seed Elena Dementieva lost in three sets, playing the fifth seed Samantha Stosur from Australia.

Even with Pavlyuchenkova and Dementieva going out, it’s still nearly a certainty, then, that there will be at least one Russian players in the quarter finals of the women’s tournament. Semis are only slightly less likely. A Russian lifting the trophy would be a surprise, however, given how well other favorites, Williams, Wozniacki and Clijsters, have been playing.

In the men’s competition, there’s almost traditionally far less excitements for the fans. Needless to say, Marat Safin’s victory a decade ago has remained the only one for a Russian male player in the US history.

There were fewer – only four – men in the first round this year than there are women in the fourth. The 12th seed Mikhail Youzhny is the only survivor by now. The sixth seed Nikolay Davydenko and unseeded Igor Andreev exited in the second, while Dmitry Tursunov lost in the first. Youzhny keeps going, as he disposed of the 18th seed American John Isner in four sets. If he gets past Tommy Robredo in the fourth, he might face the likes of Andy Murray or Rafael Nadal further on. Perhaps no other tennis news would be making more headlines this decade, were Youzhny to go so far and past such opponents in the US Open this year.