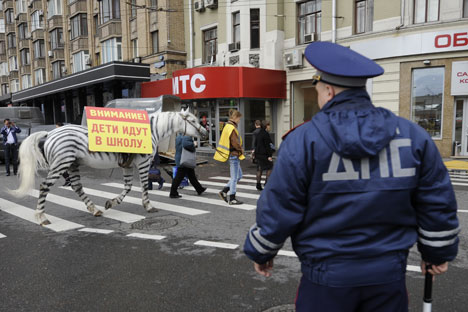 It was part of a police campaign to call attention to the importance of crosswalks, known as zebra crossings, which are routinely ignored in the capital, contributing to the horrific number of pedestrians who are mowed down by cars.

The drivers who slowed down, and there were some, might have noticed that the zebras were actually light gray horses painted with black stripes. On their backs they carried yellow signs reading, "Careful, children are on their way to school."

Drivers are aggressive and impatient in fast-paced Moscow, where it's not unusual to see cars zipping down sidewalks or blowing through red lights. Crosswalks often exist only in theory, with drivers explaining that it is too risky to stop because the car behind them is unlikely to extend the courtesy.

Anyone who has sat behind the wheel in Moscow knows that pedestrians are a big part of the problem, often darting across multilaned avenues or stepping off curbs without bothering to look left or right.

Many of the worst offenders are children, said Galina Pravdyuk, a police officer who runs educational programs in Moscow schools. She spoke Friday to a class of schoolchildren who visited an intersection being patrolled by a big striped horse called Vorobei, or Sparrow.

Pravdyuk told the children that they were never safe crossing the street, even when the green walk light was on. A car's brakes can fail, and there was even a case when a car went through a red light because the driver had died of heart failure, she said.

"Children, you have to take care of yourselves while our driving culture is on such a low level," she told them.

Newspapers are full of gruesome accounts of pedestrians killed on crosswalks. Just last week, two teenage sisters were hit in Moscow, with one killed and the other crippled. Last month, a motorcyclist hit a toddler in a stroller, killing the child.

In some of the more notorious cases around Russia in recent months, the drivers were policemen, and a number of them were drunk.

The expansion of Internet access has helped publicize the accidents and, in some cases, help find those responsible. An appeal from a Moscow blogger to track down the policeman who ran over his pregnant wife last year led to the officer's arrest, and in the face of public pressure he was sentenced to five years in prison.

Other offenders, especially those with political connections, often go unpunished. In 2005, a son of the defense minister at the time, Sergei Ivanov, struck and killed a woman on a zebra crossing in Moscow. The charges against him were dropped.

Attitudes and behavior have been slowly changing, however. As public anger over the accidents has grown, Russia has introduced tougher traffic laws and higher penalties for violations.

Drivers now stop at crosswalks with increasing frequency, and starting in November, the law will require them to brake not only for pedestrians already in crosswalks, but for those who have just stepped onto the road with the intention of crossing it.

Police also claim some success in educating children. Pravdyuk said that in her district in central Moscow the number of children hit by cars in the first half of this year was 28, down from 37 in the same period of 2009, and children were at fault in only six of the cases, half the number of last year.

Friday's "zebras" were one more step in making it safer to walk Moscow's streets.

"Just now, a man drove by and gave me the thumb's up," said Ksenia Davidova, a young redheaded woman charged with leading Vorobei across the intersection near Russia's national archives.