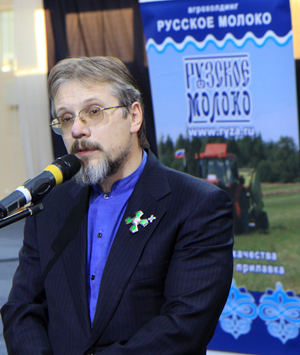 The blistering heat that plagued central Russia for two straight months affected different people in different ways, but possibly the strangest reaction to the heat was exhibited by the head of an agro-industrial complex that produces dairy products.
The dairy man suddenly announced that all of his married employees must go immediately to church and be remarried by a priest. (Most marriages in Russia are still performed in registry offices.) Anyone who failed to get to a church on time would be fired—as would any female employee who had an abortion. So what did the heat have to do with it? Everything, as it turns out. According to the dairy man, the fantastic heat and horrible wildfires that descended on Russia this summer were punishment for sins. The only way to fight the heat and fires was to repent and pray. And study the fundamentals of Russian Orthodox culture.

Russia is, of course, an Orthodox country, and 20 years after the collapse of the Soviet Union, church rites, including marriage, are increasingly popular. But for the head of a dairy farm to require that his employees marry in church and repent of their sins! That has never happened before. Even the Russian Orthodox Church was taken aback by (and harshly critical of) this bizarre initiative. Church officials said that such measures could only turn people away from the idea of Christianity.

Furthermore, the actions of the dairy-man-turned-moral-guardian raise a number of questions. Why, for instance, did he make it his aim at his enterprise to eradicate only two sins—abortion and living together without the blessing of the church? While he was at it, why didn’t he tackle another common sin—adultery? Why didn’t he forbid his married employees to stray? And offer bonuses to those who remained faithful over the years? Of course, the problem here would be how to keep tabs on the employees to see that they were being truthful. When the dairy man was asked how he intended to find out which of his female employees had had abortions, he said, “Everything secret shall be made manifest.”

It should be noted that Russian bosses (especially at private enterprises) do not stand on ceremony with their underlings, whom they tend to regard almost as their property. A friend of mine recently complained that her boss won’t let her take vacation until November, and even then she can take only ten days although by law she’s entitled to a month. Another friend wanted to quit her job, but was told that until she’d done the work her boss needed done she wouldn’t be paid. An Internet site recently decided to investigate what sort of absurd demands people in the workplace come up against. The picture was a little frightening. “For lunch we’re allowed a free bowl of soup. But the number of meatballs in the soup is limited, so is the number of spoonfuls of sour cream to go with it. Everything is counted and recounted, and any violations are reported to the top.” “We’re not only forbidden to celebrate birthdays at work, we’re forbidden even to wish colleagues Happy Birthday.” “We’re not allowed to talk to fellow employees unless our work requires it.” “We’re not allowed to laugh.” “We have to sign up to go to the bathroom. And there’s a special person to clock how long we spend there.” “We’re not allowed to open the blinds, because that uses up vital energy.”

People who work in employment agencies also come across some fairly strange demands from clients. “In one company before being hired the applicant has to submit to an eight-hour long interview with a psychologist and to a lie detector test. This applies even to cleaning ladies,” said human resources consultant Oksana Postnova. And the prospective job is not in foreign intelligence, but in domestic retail. Control over people’s personal correspondence and telephone conversations is also widespread. Not to mention overtime. Workdays that are officially supposed to end at 7 last until 9 or later.

How do Russian employees react to the petty tyranny of their bosses? They don’t, most of the time. There are almost no trade unions in Russia. Or rather, formally they exist, but in reality their influence is minimal. Yes, there are inspectors who come around and settle disputes between employees and employers. But according to these inspectors, they are usually called in case of an illegal firing.

“Russians are ready to defend only their money. As for defending their human rights in the workplace, the subject has yet to come up,” said Ivan Alekseyev, a lawyer with the Association for Workers’ Rights, and one can understand why. Violations of workers’ rights are rife at Russian enterprises. Often the official salary paid is substantially lower than what the employee is owed, and the difference is made up in so-called bonuses. If the employee is laid off, he receives only his official salary. Other employees are hired without a formal contract and may be fired at any moment without compensation. Given situations like this, human rights are not a priority; workers just want to be paid what they’re owed.

At any rate, it’s good that precedents of workers standing up for their rights are becoming more numerous. In the last year, the number of appeals to Moscow’s Labor Inspection has risen by 20 percent. More and more law firms are specializing in defending workers’ rights, and the number of their clients is also growing. So perhaps we’ll soon see people standing up for their dignity at work. True, even now the choice of whether to put up with a humiliating situation or not is up to the individual. On this subject a blogger recently wrote: “When my boss screamed at me in the rudest way because of something trivial, I quit. I told him: I’m leaving not because you’re a boor and a lout, but because if I work with you much longer I’ll become those things too. I don’t want that.”